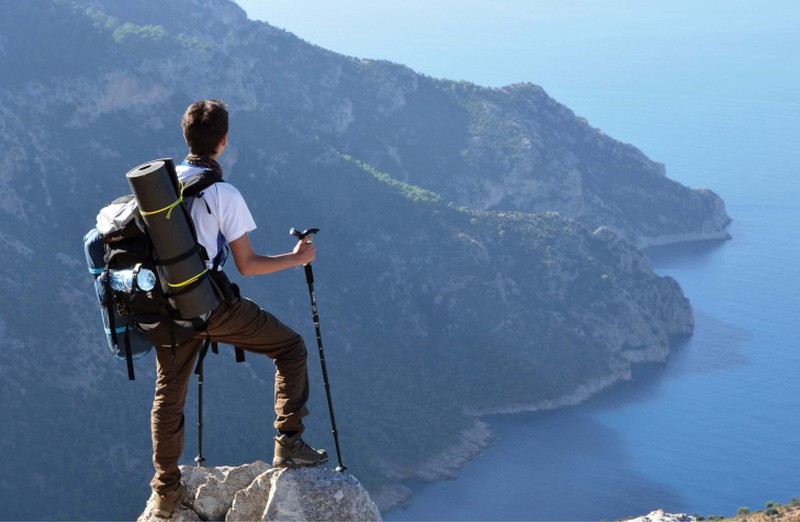 Stretching from the coastal town of Fethiye to the city of Antalya, the Lycian Way is a great way for hikers to sense nature through history. Next week, a large group of people from different cities will gather to hike along the Lycian Way with five days of camping

Thinking about how prehistoric people spent days and months traveling from one point to another, it is not surprising to see how humans have excelled at walking long distances - or at least eager to take the challenge. Turkey's longest hiking route "Lycian Way" - Likya Yolu in Turkish - a 540-kilometer and 29-day way-marked footpath extending along the southern coast between the resort town of Fethiye and the province of Antalya is undoubtedly the best place to test your physical endeavor in Turkey.

On May 7, Interrail-Turkey will be holding a collective hiking tour along the Lycian Way with a large group already willing to cover its first 50 kilometers. So, the tour may not take a whole month but will continue until May 12 with full adventures and camping nights. The hiking tour is open to everyone as well as different groups around Turkey, but the organizers are asking one thing from the participants - each hiker must bring three saplings to plant on their route. The event is a chance to enjoy the best of both worlds as hikers have the chance to do something good for the environment, while spending a few days in nature with their home on their backs. Saplings will be planted in certain places. A professional trekking team will follow the hike and the group will camp out together. The organizers said the tour will pass in the most relaxing way possible to allow participant groups to fully enjoy themselves. More than 2,000 people are expected to go hiking along the Lycian Way in May. Check out Interrail-Turkey's social media accounts to get updates on the tour's exact route, which will be announced soon.

As the country's first way-marked trail, the Lycian Way is packed with Roman roads, mule trails and old paths that are not suitable for biking. This mountainous route boasts spectacular coastal views, archaeological treasures dating back to as far as the 8th century B.C. and villages with distinct Lycian flavor. Trekkers will discover well-preserved Greek and Roman cities and a Lycian necropolis covered by vegetation. They will also explore the stunning cliffs and coves of Cape Gelidonya and get familiar with quiet beaches and remote bays. During the series days of walking, walkers embrace themselves with nature and history just like when they visit the ruins of Olympos, once one of the most important cities in the Lycian Union. Asia Minor boasts a wealth of flora and fauna, and Lycia accounts for much of this flora but much of the indigenous fauna has disappeared. Especially interesting are the bulbs, the Mediterranean maquis and the extensive pine forests. The descent from Faralya to Butterfly Valley is one of the most exciting parts of the hike as well.

The most suitable time for hiking along the Lycian Way is between February and May or September and November. In the fall, the landscape is an arid brown and water is scarce. Hiking during the summer months is not advised, as hot weather is a serious problem for long-distance walking. Accommodation is available at boutique hostels, small hotels or village houses. For independent camping, there is a lot of space on the way.

The Lycian Way was researched and way-marked by amateur British-Turkish historian Kate Clow and Terry Richardson in 1999. The Lycians were an ancient civilization who inhabited the area between the bays of Antalya and Fethiye, a mountainous territory. Their strategic position gave them unique opportunities for sea trade and piracy. Clow wrote a book titled "The Lycian Way" on the walking trail, and it is a good idea to have one on hand before setting out. The book has all the info you need to plan your trek, detailed descriptions and times for each section, altitude diagrams, information about historic places and the climb of Mt. Olympos. In its latest edition, the walker profile changes from dedicated backpacker to supported trekker, active vacationers and archaeology and local culture enthusiasts. It also describes the towns and villages including Kalkan, Kaş, Myra, Adrasan and Çıralı with an updated detachable map and all route changes since then. Another suggestion comes from Atulya K. Bingham, the author of "Ayşe's Trail." Although not a travel guide, this travelogue brings a real story by Ayşe Metin, a 38-year-old mother from Istanbul, who has never camped alone and tackles the Lycian Way.
RELATED TOPICS