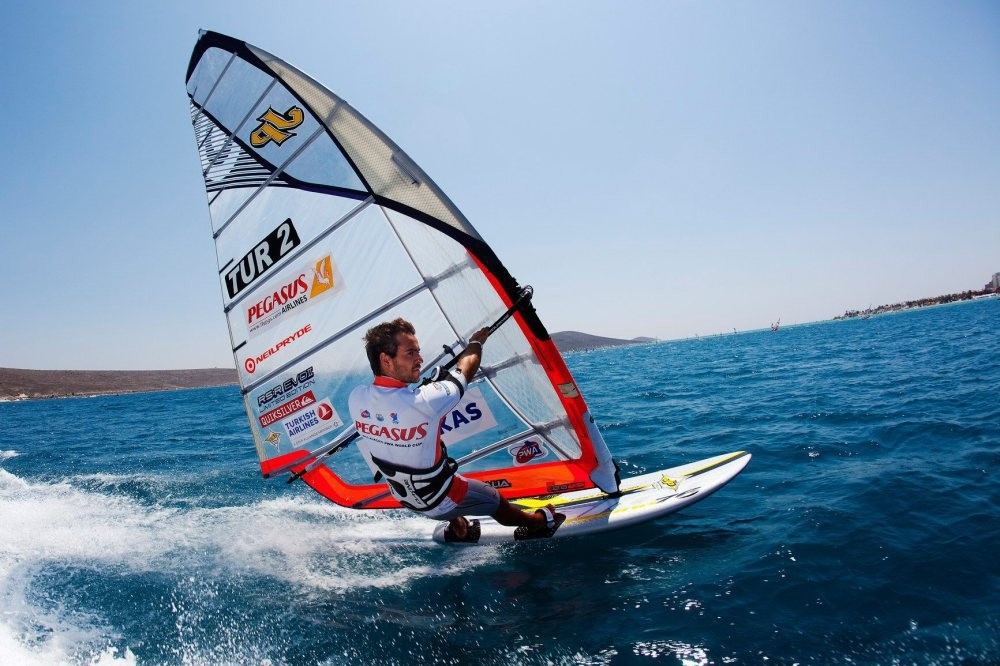 In the summer months, the coastal town of Alaçatı in İzmir's Çeşme district is buzzing. Recently, windsurf academies run by Turkey's national windsurfers are giving the town a sporting character, offering a travel opportunity combining sea and sports

One of Turkey's most popular tourism centers that features boutique hotels, stone houses and authentic architecture is Alaçatı, which also serves as a favorite spot for surf lovers with its constant winds blowing all year. A suitable spot for surf training with its closed gulf and calm, shallow sea, Alaçatı has several surf schools that offer training to surf lovers of all ages.

Speaking to Anadolu Agency (AA), national surfer Çağla Kubat who opened a surf school in the town said that each year they have improved the school since it opened in 2011, training future surfers in three-week camps under the supervision of expert teams, and providing them with a license upon completion of the program.

Pointing out that they train promising surfers who show great potential, Kubat said: "For example, the world junior surfing champion was trained at our school and now he is continuing his education in Hawaii. We also have very ambitious children in training and Ali Maga is one of them. He has started appearing in competitions and has shown his success in the Turkish league races. He will soon bring top scores on international platforms."

Stressing that Alaçatı is a very special place for her, Kubat continued: "This is the first place where I started surfing and really improved myself. Alaçatı is a safe place; especially for teaching kids how to surf. You do not have to work against challenging conditions. In this sense, I have not come across any other place like Alaçatı in the world. Foreigners like this place so much that they come here with their wives and kids even though they can surf in their countries or at other surfing centers."

Bora Kozanoğlu, a national surfer who also has a surf school in town, said he opened his surf school to popularize the windsurfing sport after winning the world's second place title twice and competing in over 25 championships in Turkey during his 25-year career, that wind sports play a crucial part in making Alaçatı a popular tourism destination.

Kozanoğlu said that since it became a world leader in windsurfing, Alaçatı has become an attraction center with brand value, He added that people have begun showing increasing interest since he opened the surf school and people of all ages are coming here from around Turkey to learn how to surf. "A 70-year-old grandfather came for training. We are very pleased with the interest in the sport. Alaçatı is one of the world's top three places for surfing in the world. Many people around the world who are interested in this sport learned about it here," Kozanoğlu said. "Its popularity increased thanks to the competitions that were held. Alaçatı is a special parkour. First of all, it is very safe and there is nothing here that can disrupt your balance since the sea is not rough. You can come and go very easily. The water is shallow and its depth is 1 meter up to 600 meters offshore." Stressing that it is possible to go back on foot when you cannot come back on board because there are no rocks or stones on the seabed, only sand, Kozanoğlu said that it is a very suitable place for training but you could still come across small pieces of rock wherever you go since it is a closed bay.

In Alaçatı, the number of new learners increases each year. Kozanoğlu went on to say that people come here from Istanbul just to learn how to surf, and most of the surfers around the world probably received their surf training here. "Tens of thousands of people have learned how to surf here so far. İzmir's climate is quite suitable for this, as winter lasts only two months here. You can easily surf in the remaining ten months of the year," he added. "Prices are also affordable. You can finish your training by taking a 10-hour course with five sessions in three days, enabling you to be a good surfer on your own."

Learning how to surf in Alaçatı, 10-year-old Ege Çiçek Suna said she observed the surfers while at the beach and then decided to learn how to surf. "I saw the surfers and I envied them. I thought maybe I could be a surfer and join the competitions; then, I made up my mind," Suna said. "I have tried many sports so far including football and basketball but surfing is the sport that I like the most. It is an amazing and exciting sport."

Ten-year-old Başak Çoban who started surf training last year said: "I was curious and came for training. It was hard at first but now it is so much fun. I want to continue doing this in the future and I want to join the Olympics as a national athlete if possible." Another young surfer, 13-year-old Ada Kanlıbaş, said she has been surfing for three years. "I improve myself each year. It was hard at first; I could only hold the pole for 10 minutes. Now, I want to win in the under-13 category and win championships in other age categories, as well," Kanlıbaş said.
RELATED TOPICS