Turkish couples travel happily ever after on motorcycles 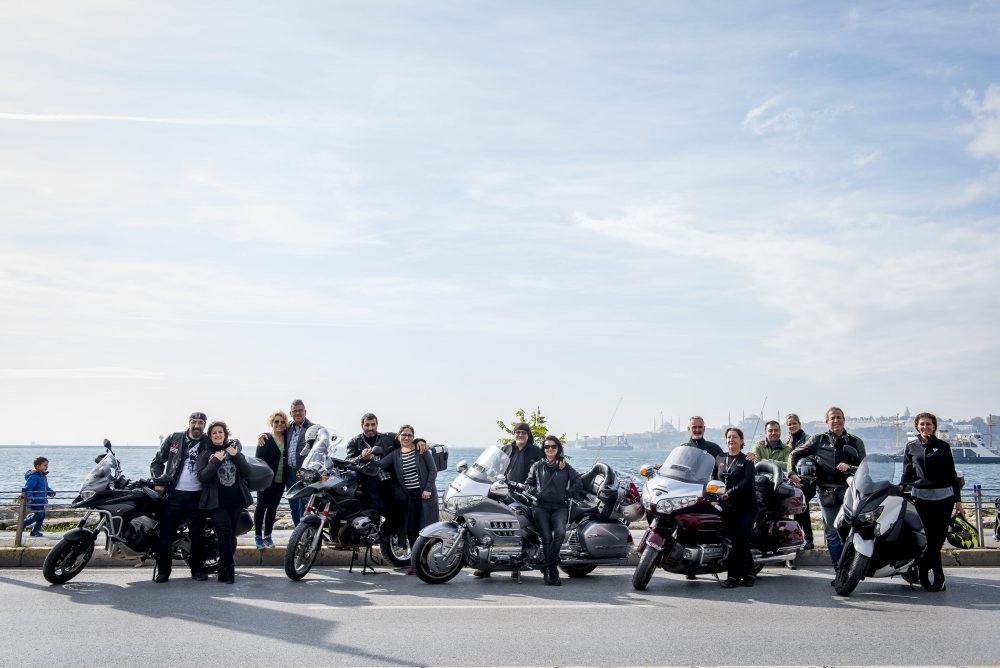 For single motorcyclists this group may not be your cup of tea, but for married couples it offers the joy of travel both in Turkey and abroad. With members of different ages and from different backgrounds, the Couple Riders Association welcomes all motorcyclist couples in their travels

Established to bring together couples with a passion for motorcycles, the Couple Riders Association based in Istanbul organizes activities for its members, sometimes going abroad and sometimes riding the best roads in Anatolia. Bikers who dance with motorcycles along with their wives, ride to hundreds of countries and thousands of cities on their bikes. The group does not accept singles. Members meet every week and consolidate their friendship with different activities in addition to road trips.

'Both our daughters ride motorcycles'

Hüseyin Arda, 52, and Nedret Arda, 48, a couple from Tekirdağ, are both self-employed. They have been married for 27 years. Arda's passion for motorcycles dates back to his childhood. "My uncle took me to a steep hill while I was sitting on the front [of his bike]. I started shivering. That's when my passion started, on that bike. I have been a biker since that day," Arda said. He instilled his love of motorcycling in his wife, who goes along on his bike, or "iron horse," as he calls it. "I trust my husband. Both our daughters ride motorcycles. It is enough for me to ride on the back with them," Nedret Arda said with a huge smile. The couple has previously visited 14 countries in 20 days. She continued: "You have a fight with your husband, but everything is forgotten when you tell him to hit the gas. The wind that blows in your face on the bike feels like therapy." She also added that they have so far helped four other families get into motorcycling.

Another couple is Muhammed Mehmetoğlu, 52, and Gamze Mehmetoğlu, 49. They joined the group after seeing it on the internet. His nickname is "Google Muhammed" - everyone in the group asks him everything. Gamze Mehmetoğlu, on the other hand, is the group's vocalist. She works as an assistant at a music association in Maltepe. Muhammed Mehmetoğlu's uncle brought the first motorcycle to Midyat, Mardin, and he was introduced to it by riding with this uncle. He took a break from riding due to his job, marriage and kids. "Love for the motorcycle never ends. I started again 10 years ago. I trained in riding techniques," he said. Mehmetoğlu's wife has always had her husband's back and started riding as well. She noted the group organizes different activities. "We are a colorful group. We go to the theater, museum, cinema, concerts and even to the hamam [Turkish bath]. While riding a bike, you feel like you are in the clouds," she said. They have visited over 100 countries and thousands of cities; when they do not take their bike abroad, they hire one.

'When on the bike, our fights are over'

Muhterem İzgi, 42, and Funda İzgi, 39, are the group's younger members. Despite his family's opposition, İzgi bought his first bike 15 years ago and has been riding a motorcycle for the past four years to escape the traffic jams in Istanbul. "It is cool to ride your bike to work," he said. This couple has been joining road trips with the group for the last two years but they cannot take on long trips since they have children. Funda İzgi matches her husband's passion for motorcycles and loves joining the tours with her husband. "I have experienced the joy of riding a bike. I have met people that I would not have met otherwise. There are people from all kinds of professions. When we fight and do not talk to each other, all the fights are over when we get on the bike. The bike has a uniting power," she said.

The association's founder Hakan Duyar, 52, wanted to establish something different to the other motorcycle-related groups in Turkey. "I wanted it to be different from what others did," he said. Duyar, who founded the association in 2008, said that due to widespread use of the internet, they have friends from many cities in Turkey. They have visited almost every city within the country and abroad. The association also initiated the establishment of a sister group called "Married and Happy." They recently visited Iran together. Duyar said they prove wrong the prejudice suggesting that motorcyclists in Turkey are punks. "The members have professional careers and children; some of them even have grandchildren," Duyar said. "When I bought my first bike, my wife said, 'No, I will not get on that bike, you ride it yourself!' I told her the bike's back seat does not stay unoccupied, and I got the bike." His wife Nuray added, "You feel free in the country you arrived in on a bike. It lets you get to know the city. The group promises long-lasting friendships."

'EITHER ME OR HIS BIKE'

Tolga Tahtacı is a third-generation biker. In his family, he grew up training in the culture of motorcycles. His grandfather was a Harley-Davidson rider and his father used to keep his bike in the living room in the winter, like the third member of the family. Despite being in their 70s, his parents still travel on their bike and tour Europe. When Tahtacı got married 14 years ago, he wanted the same passion to last in his family, but his wife Melek was not inclined to love motorcycles. She said, "I told my husband, 'Either me or the bike.' I thought it was dangerous." Tahtacı did not give up and fought to convince his wife: "I bought a helmet, jacket and boots. It took me one and a half years and I later bought the bike. I habituated my wife by telling her, 'Get on behind me' over short distances." Now they both take long trips on the bike. Melek Tahtacı said traveling as a group provides socialization and that the feeling while traveling with her husband on a bike is incomparable.
Last Update: Nov 17, 2016 2:39 pm
RELATED TOPICS