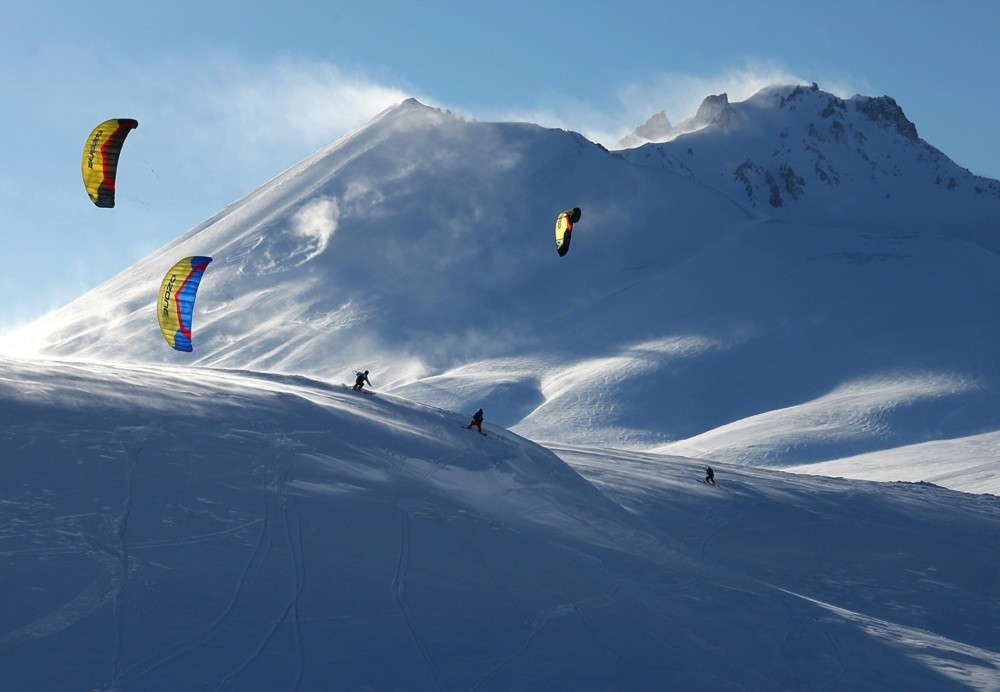 The Erciyes Ski Resort in central Kayseri province is one of the leading snowkite centers in Turkey.
by Daily Sabah Dec 21, 2016 12:00 am

Skiing is not the only option for sporty travelers visiting Turkey in winter, infact, they can find a wide selection of winter sports at well-equipped centers scattered around the country

The December and January months are the best time for adventurous people to enjoy winter sports ranging from snowboarding to heli-skiing, snow rafting to snowkites and other sports that appeal to sporty adventure-seekers all around Turkey.

Snow-capped mountains across the country offer some of the best ski slopes in Europe and should certainly not be overlooked this ski season. While Mount Uludağ in the Turkish province of Bursa offers a top-notch experience for skiers, resorts such as the Zigana Ski Resort in northeastern Gümüşhane province - just 3 kilometers from the Zigana Pass - is just one of the centers available for winter sport enthusiasts in Turkey. The ski season runs from December until April, offering professionals as well as amateurs a good window of time in which to select the perfect ski resort and enjoy their favorite winter sport which is open for roughly one-third of the calendar year, depending on weather conditions. At the Zigana Ski Center, experienced ski instructors offer lessons to amateurs interested in learning more about the sport while a wide selection of skiing gear is also available to ensure safety and preparedness throughout your skiing experience.

A second choice worth mentioning is the Ilgaz Mountain Ski Resort located in northwestern Kastamonu province, which is deservedly referred to as a "boutique" with a simplistic look that belies the grandiosity of the resort. Here, skiers can explore three ski routes, practice tracks, ski lifts and tele-skis.

Travel agency Momondo's Serpil Öztürk said, "With its advantageous geographical location, Turkey is ideal for tourism throughout the entire year. It is possible to try various winter sports from skiing to heli-skiing and even snow rafting at centers at international standards. In other words, it is possible to perform winter sports, which are usually deemed as expensive in a more moderate way in Turkey now. We recommend that you take a look at our guide before you select your ideal destination."

The second most widely preferred winter sport worldwide after skiing is snowboarding. Located in the eastern province of Kar, the resort Sarıkamış welcomes guests throughout ski season, renowned for its "crystal snow" and offering one of the most ideal ski tracks in Turkey for this sport. The resort is home to snowboarding tracks that are ideal for amateur snowboarders and beginners, featuring the first lap of its track at a slight incline deemed convenient for beginners and a second lap which is usually recommended for advanced and professional snowboarders. Surrounded by pine forests and opening for the winter season in the month of November, the snowboarding season here continues until April.

On the other hand, the Kartalkaya center located in Bolu features 13 ski tracks situated at snow depths reaching 3 meters at mid-season. The center includes an area that is reserved solely for snowboarding, where trainers offer snowboarding lessons for beginners. Another option for snowboarding enthusiasts is Palandöken, where natural tracks attract a number of snowboarders. Situated near the center of the city of Erzurum, Palandöken also has a track licensed by the International Skiing Federation. The best time for skiing is between December and May.

The heli-skiing experience is truly a unique experience for skiers, who are taken via special helicopters to the tops of hills located far away from city centers at high snow depths. Requiring special equipment, heli-skiing is more expensive than other winter sports.

The center for this sport, which can only be performed at a limited number of locations all around the world, is located in the Turkish province of Rize in the Ayder Highlands, considered the epicenter of heli-skiing among fans and boasting a 2,800-meter peak.

Despite being an uncommon sport in Turkey, snow rafting involves taking boats across snow and is best experienced at the Uzungöl center in the province of Trabzon. Featuring high peaks, Uzungöl is now in high demand as tourists seek high-quality snow rafting and higher snow depths.

Erzincan's Ergan Mountain Ski Resort, which has the longest ski track in Turkey, also offers snow rafting. Only 12 kilometers away from the center of Erzincan, Ergan offers overnight accommodations as well as shuttle bus services running to and from hotels around the city center. Lying in the foothills of Ergan Mountain, this region has the most suitable terrain for snow rafting; especially between the months of November and March.

For those who would like to get off the ground, snowkiting involves restraining snow kiters who are tied with ropes while wearing a snowkite. Defined as "flying while snowboarding," snowkiting has been deemed the latest advance in snowboarding.

The Erciyes Ski Resort is one of the leading snowkite centers in Turkey. Located at 3916 meters and 25 km from Kayseri city center, Erciyes Ski Resort, with tracks with slopes ranging between 10 to 20%, offers grounds suitable for both snowboarding and snow kiting. The season starts in December and ends in April. Currently, there are efforts underway to organize a world championship at the resort while it hosts the International Snow Kite Festival each year.