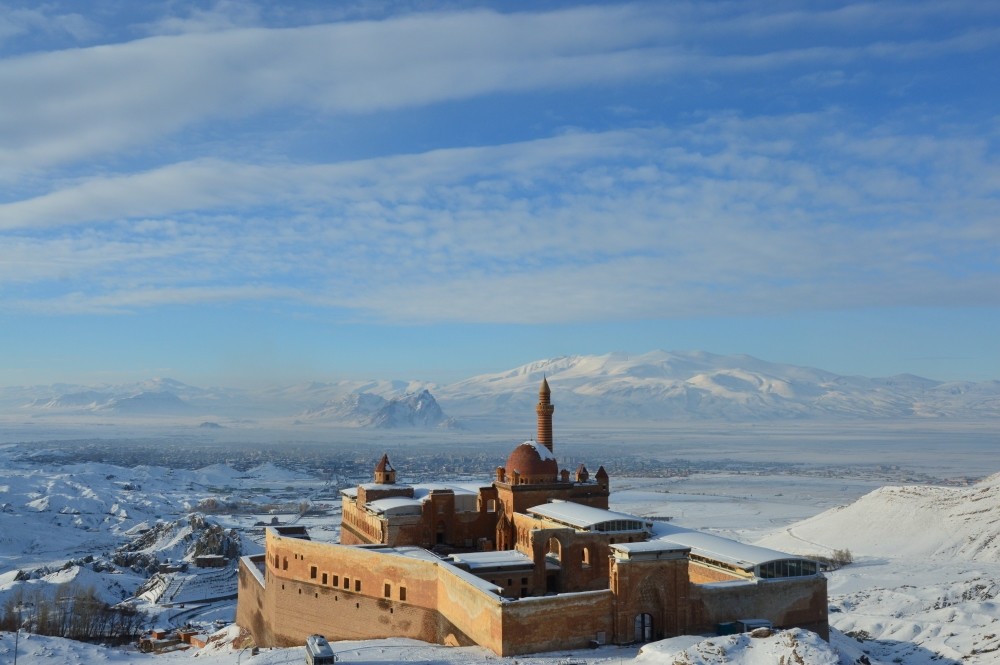 You do not have to pack your camera away when winter comes as the white blanket covering the surrounding areas gives photographers to some of the best winter landscape shots. In Turkey, here are the most popular locations by professional photographers

For amateur and professional photographers, winter is an exciting time to hone skills and add artistic images to your portfolio. Capturing shots in winter obviously brings challenges that many photographers do not generally encounter in other seasons. For productive and enjoyable photo work in winter, Turkey's different regions offer something for all photographers. The following are five places where you can capture unique images. 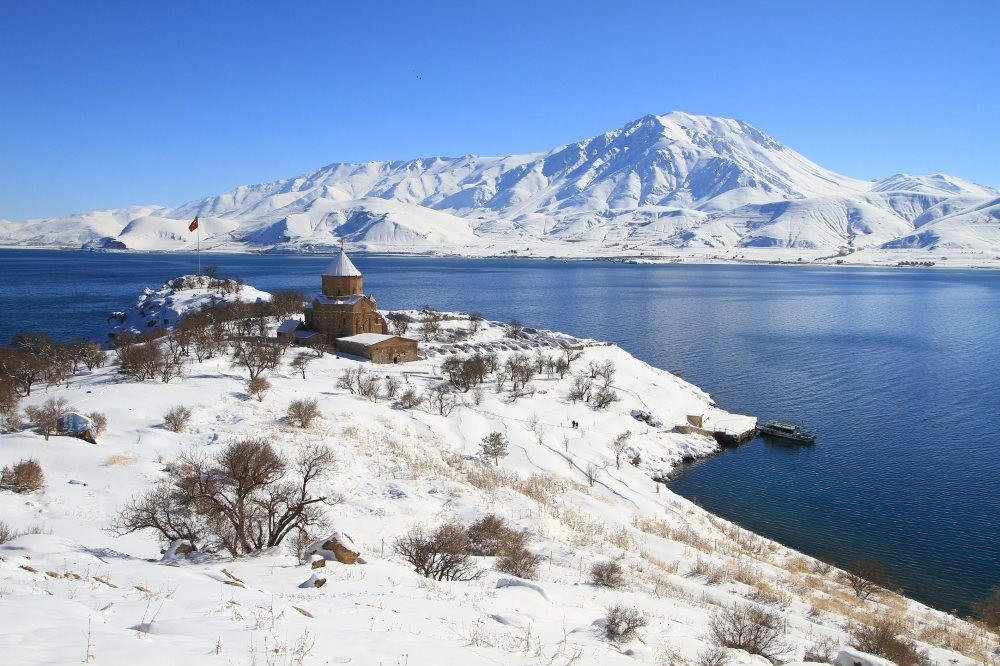 Akdamar Island on Lake Van, the largest lake in Turkey, is among the most important tourism destinations in the region with its historic church and natural structure. Located within the Gevaş district, which is 45 km from eastern Van province, the island offers beauty that is worth seeing in all seasons, especially in winter.

Akdamar Church (Cathedral of Holy Cross) on Akdamar Island, one of the 10 places in Turkey on the UNESCO Temporary List of World Heritage Sites, was built by architect Manuel in 915-921 following an order by King Gagik I Artsruni to house a piece of the "Holy Cross," which was reported brought to Van in the 7th century after it was taken from Jerusalem to Iran. The church, constructed on the southeastern part of the island, is regarded as one of the brightest works of medieval Armenian art in terms of architecture. The exterior of the church, built of red andesite stone, contains rich plant and animal motifs and scenes taken from the Holy Book, carved in low reliefs.

Kaçkar Mountains is another destination that offers the beauty of nature covered in snow in winter for both your travel and photography archives. Kaçkar Mountains National Park has an area of 51,550 hectares. While a large part of its territory is located in Rize's Çamlıhemşin district, a part lies within the borders of Erzurum and Artvin provinces. During the trip, tourists can see historic bridges, castles, old stone and wooden mansions, glacier lakes and wild animals living around the mountains. 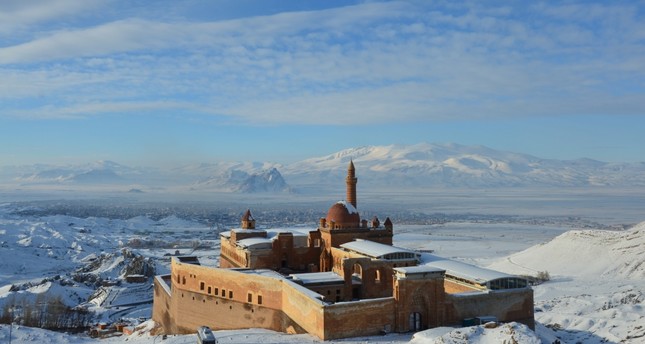 Beautifully covered in snow, the İshak Pasha Palace, lying in Ağrı's Doğubeyazıt district in the eastern region, draws a great deal of interest from shutterbugs.

The palace, which was built on a mountain hilltop - 5 kilometers from the district, is the last monumental structure of the Ottoman Empire during the Tulip Age. As well as being one of the most prominent and distinguished examples of 18th century Ottoman architecture, it also stands out in the history of art.

The palace is characterized by the architectural styles of Ottoman, Persian and Seljuk civilizations under one roof. The palace was constructed by Ishak Pasha II and Çolak Abdi Pasha in 1685, and its last shape was given in 1784.

There are many myths about İshak Pasha Palace. According to lore, the dungeons played a light trick when prisoners entered. Based on the level of crime committed by the offenders, they passed their time in very light or low-light jail cells. Another legend says that milk produced by villagers who lived in the surrounding mountains reached the palace via an enormous underground plumbing system and milk came from the fountains.

Both local and foreign visitors are in awe of İshak Pasha Palace, one of the most beautiful examples of Turkish architecture. Erhan Kalkandelen, one of the photographers that recently visited the palace, said: "We came here early in the morning. I think vehicles could not drive up to the place due to snow for a few days. You can capture the city and history here at the same time. It is a very beautiful place." 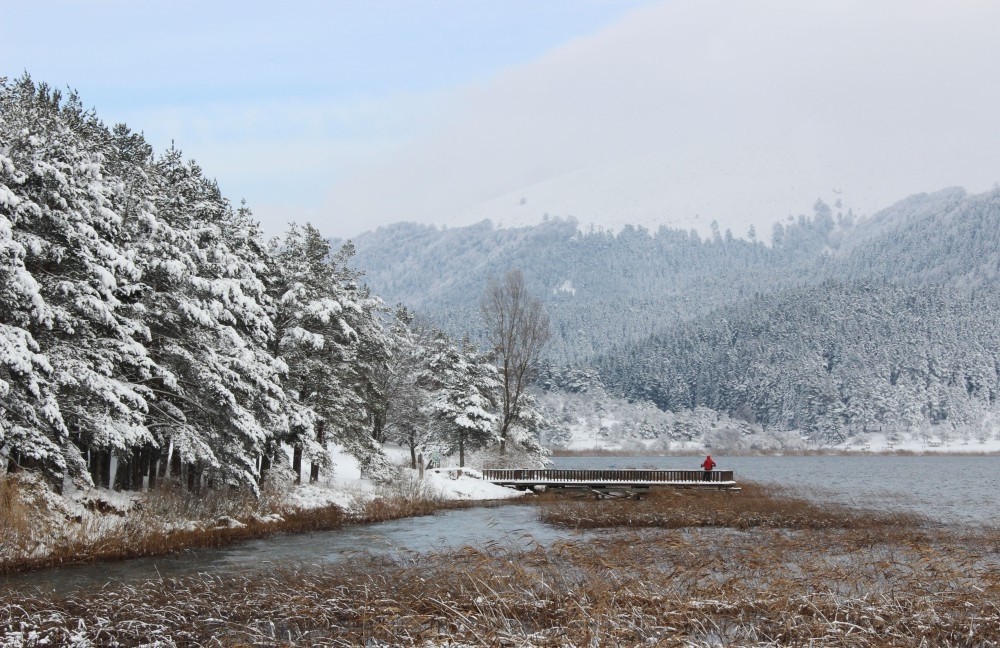 Those who visit Lake Abant from December through April when the pine trees are covered in white snow can ride carriages, horses and bicycles around the seven-kilometer-long lake, can have a nice picnic at the edge of the lake and enjoy the snow by sliding down from the top of hills. The edge of the lake is surrounded by water lilies and reeds in places. There are flatlands amid the forests, mostly consisting of pine, fir and beech trees. In this area, photographers can take some of the most awe-inspiring images in winter. 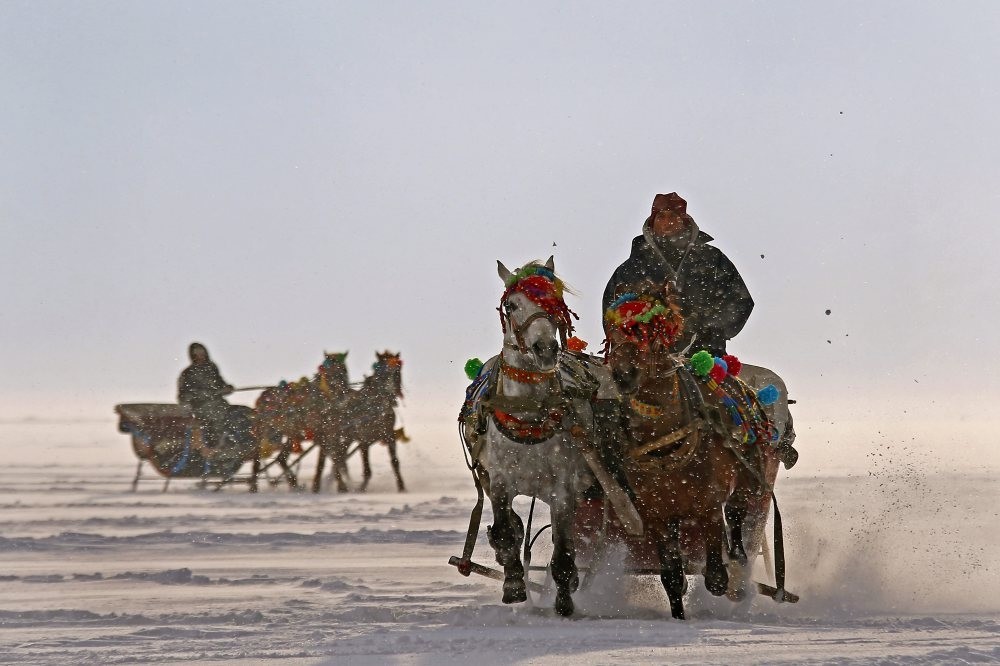 Lake Çıldır, the second largest lake in eastern Anatolia and one of the most interesting winter landscapes in Turkey, is completely frozen due to the cold weather these days. It offers a mystical world with its famous horse-drawn carriages and ice-digging local fishermen.

Although the snowy, cold weather negatively affects daily life in the region for a while, sleigh riders, who organize tours for tourists on the lake in winter in Ardahan's Çıldır district, experience a different excitement these days. The sleighs, which have become the symbol of the region in winter, are among the "musts" on a trip to Lake Çıldır. In February, Ardahan will be getting ready for the Golden Horse Winter Festival. Turkey's only natural ice rink with an area of 123-square-km, Lake Çıldır hosts sleigh, javelin and archery races during the festival.