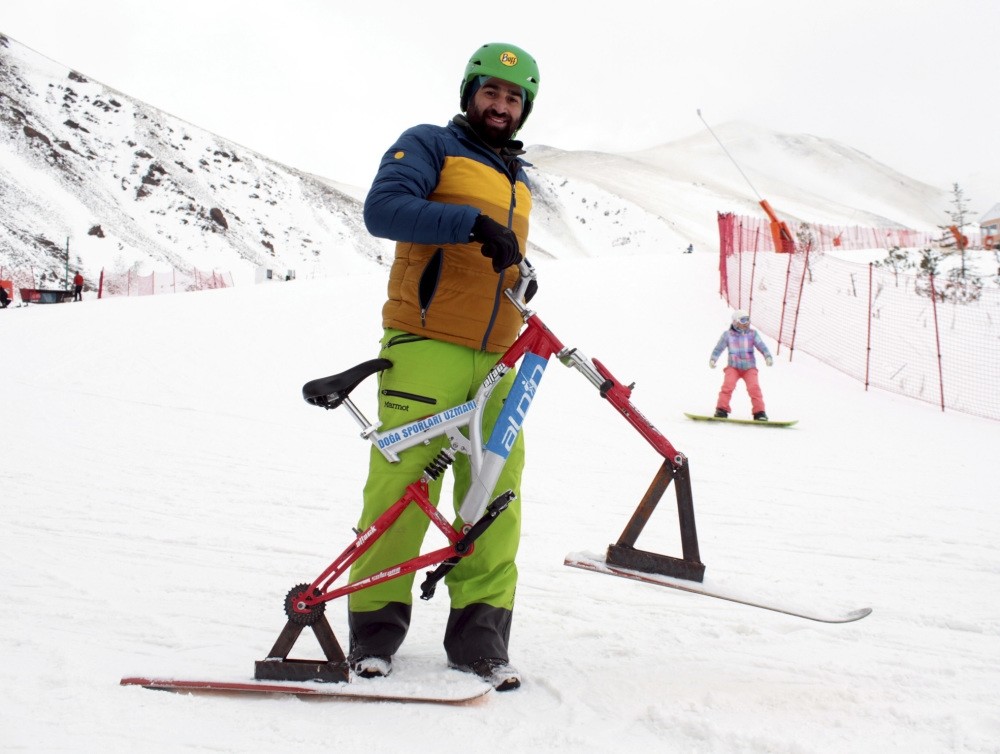 Zantu0131r is used like a snowboard and features no-braking system, meaning skiers must stop the ski board employing the same techniques used in snowboarding. This unique new invention has become very popular among adrenaline seekers.
by Anadolu Agency
Jan 10, 2017 12:00 am
Home to Turkey's one of the biggest ski resorts the city of Erzurum, lying on the foothills of Mount Palandöken, is frequented by winter-sport lovers from Turkey and abroad.

At the DADAK Nature Sports Club at the slopes of Palandöken, mountaineering and skiing trainers have come up with an innovative new way to ski. This unique new invention, known as "Zantır," has become very popular among adrenaline seekers. It is predominantly used during the spring months as well as in winter.

The Zantır was quick to become a popular tradition among club members including, Mustafa Tekin, a mountaineering and skiing trainer who spoke to the Anadolu Agency (AA) as he dismantled the tires, brakes and gears of his bicycle to install one of these ski boards at foot of the Palandöken.

Unlike mainstream ski equipment, Zantır is used like a snowboard and features no braking system, meaning skiers must stop the ski board employing the same techniques used in snowboarding.

Speaking to the AA, Tekin said DADAK Nature Sports Club organizes various events for members every spring, when club members ascend the Palandöken Mountain equipped with their bicycles and ski boards. Mentioning that the sports club now organizes events designed specifically for this equipment, Tekin said, "We ride our bicycles to the mountain and when the snow begins [to fall] we take our ski boards out and climb the summit. This gives us a chance to enjoy two sports at the same time."

Tekin said that is how their idea of a bicycle fitted with a ski board emerged, "We dismantled the tires, brakes and gear system of an ordinary bicycle and attached ski boards to it. This would allow you to slide down the mountain just like other ski boards. You are able to bring it to a stop just like the skiers. What we do is neither skiing nor cycling and we call Zantır."

He claimed that there was no other vehicle in Turkey like the Zantır. "You sit while riding the bike and experience the joy of skiing. There is no harm to nature either. You just use kinetic energy and slide down the hill."

Mountain guide and ski trainer Yıldırım Beyazıt Öztürk, riding a Zantır for the first time, said, Zantır was the brainchild of his mentor Mustafa Tekin, and his experience on the vehicle was extraordinary.