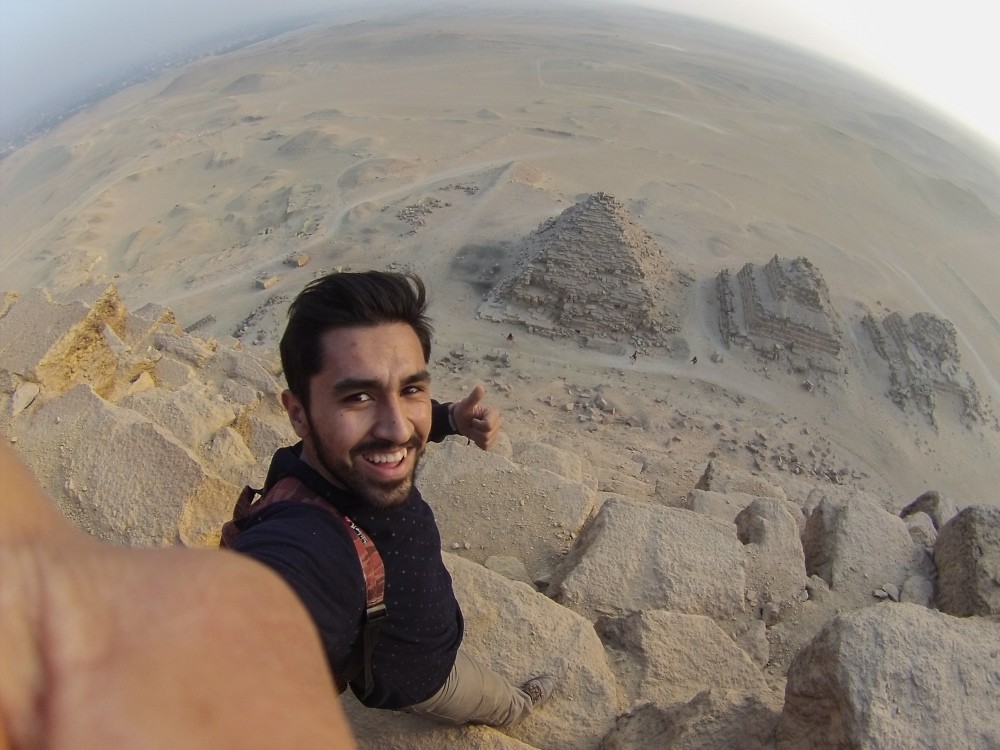 The photo was taken with a GoPro.
by Anadolu Agency Jan 23, 2017 12:00 am
Fatih Kömürcü, a highly spirited Turkish adventurer, scaled the Great Pyramid of Giza, the oldest and largest of the three pyramids in Egypt, and took selfies to immortalize the moment.

There are rules against climbing to the pyramids to protect them from damage and in certain cases, climbers can face a prison sentence. Although aware of the rules, Kömürcü could not help himself in the presence of their dazzling appearance and found himself on top of the pyramid in about 10 minutes. "I previously heard some German and Russian tourists climbed to the top of the pyramids and that there are strict restrictions against it," he said.

Like in other cases, Kömürcü was taken into custody in early October for a day and released after the interrogation. He was asked by police staff to delete the photos he took on top of the Great Pyramid of Giza. "Climbing to the top was much easier than I thought, but climbing down was difficult. I remember police staff calling out to me both in Arabic and English to come down while I was climbing and some tourists were encouraging me with applauds," he said. He was really upset when he was deleting the photos on his cellphone.

A student from the Mimar Sinan Fine Arts University, Kömürcü is a thrill-seeker having walked from Georgia to Bulgari in 51 days and went on a cycling tour around Iran, Azerbaijan and Georgia. His next successful bid was rowing along the Marmara Sea on a canoe for three days from one point to another. In March, Kömürcü is planning to walk along the frosty Lake Baikal in Siberia from the south to the north within 17 days.
RELATED TOPICS