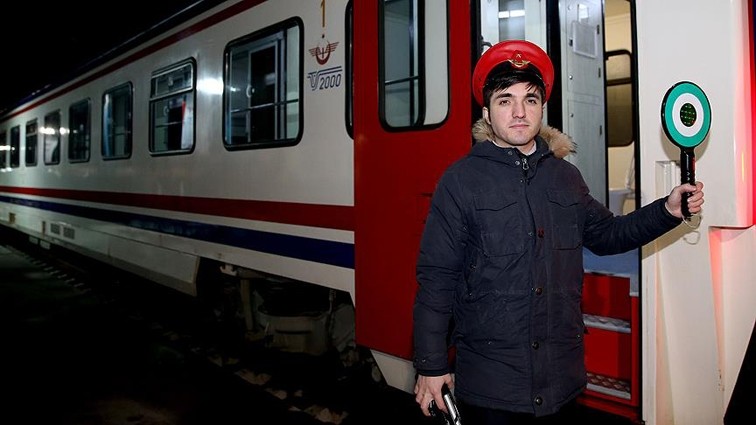 by Anadolu Agency Feb 22, 2017 12:00 am
The Istanbul-Sofia Express, the result of an agreement between State Railways of the Turkish Republic (TCDD) and Bulgarian Railways, set off from Istanbul's Halkalı train station on Feb. 20 for its first journey, carrying two machinists, three conductors and 22 passengers. The train reached the border at Kapıkule four hours after its departure, arriving in Sofia at 8:45 a.m. yesterday.

The train service from Sofia to Istanbul (and vice versa) is planned to run daily. The train is scheduled to leave from Halkalı Station in Istanbul at 10:40 p.m. and from Sofia at 9:00 p.m. The service has four carriages, with TCDD providing two sleeping cars and one couchette and Bulgarian Railways offering one couchette car.

Speaking to an Anadolu Agency (AA) correspondent at the Kapıkule border gate, TCDD executive Veysi Alçınsu said they are offering a comfortable, high-quality journey with the new service. Alçınsu said passengers of the Istanbul-Sofia train service will be satisfied with their travels. "Many will come from Bulgaria to Edirne and Istanbul for tourism. Of course, this train service is not only limited to Sofia. The railway also has connections with Belgrade, Bucharest and Budapest, so the new service will definitely contribute to tourism."

Passenger İsmail Zaloğlu admitted that the last time he traveled via train was in 1980. Saying that the Istanbul-Sofia Express is very nostalgic, Zaloğlu added, "It is nice of our railway companies to initiate such a route. I am very glad and I have to admit that I am having a great time. God willing, more and more people will use this service. I also believe that the train service will have a positive impact on tourism. I think many people from Turkey will go to Bulgaria and many will come to Turkey from Bulgaria and the train will make a great contribution."
RELATED TOPICS