Belgrade: Honorary capital of the Balkans 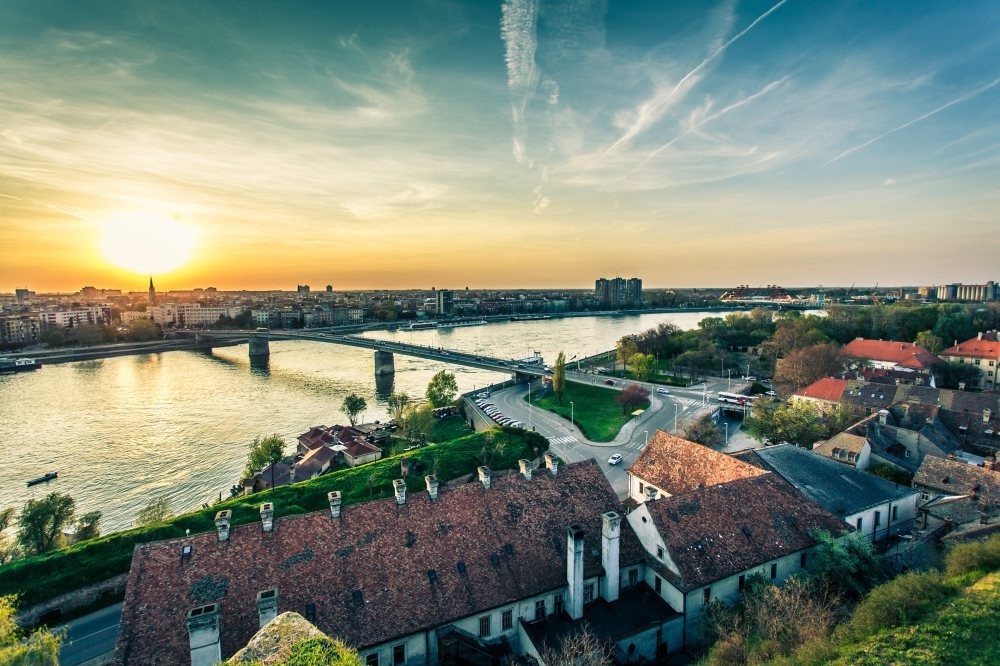 'If the Balkans are one country, Belgrade is the capital.' Hosting the once-throne of Yugoslavia, Tito's final resting place and 'The Beautiful Blue Danube' that inspired the famous waltz, Belgrade promises visitors both cultural and historical satisfaction

When I imagine a European vacation, I imagine Victor Hugo, Milan Kundera and Ernest Hemingway touring art galleries with Anna Karenina and Lady Chatterly on their arms, strolling and taking breaks at fancy cafes to eat croissants and drink coffee in tiny cups. Later, I see them walking up a cobblestone street to an old castle or going to an evening show. In my mind's eye, I can also see us being friends and having philosophical, yet whimsical, conversations that would rival the major plots in romantic novels, while later drowning whatever sorrows we might have in wine, women and song.

As a whole, Belgrade was able to offer up this exact experience. Our picturesque day was spent strolling down streets loaded with cafes and restaurants, eating good food and drinking tiny cups of coffee while exploring old castles and later going to evening shows, which left us feeling cultured and adventurous at the same time. It can be said, if the Balkans are one country, Belgrade is the capital. 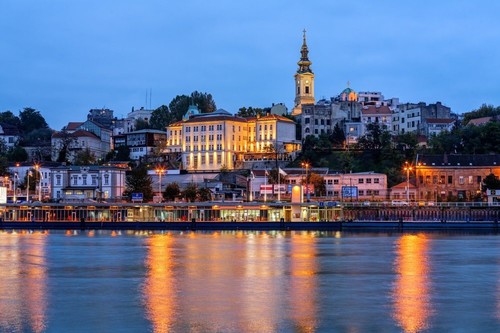 The people are friendly, almost everyone speaks English and the country is cheap as it comes. Take a weekend to explore Belgrade, and the end result will be a much more sophisticated you. They've raised cafe culture to impossible heights and I adored it. Here are some of my experiences and a few humble recommendations.

The Serbian dinar is approximately 100 dinars to $1, which makes it relatively easy to estimate cost. They issue bills in surprisingly small denominations, so you'll see street musicians who look like millionaires, their guitar cases stuffed with 10 dinar bills.

There is a saying about the food in Serbia: "When the Ottomans left, they took their vegetables with them." Fortunately, they have plenty of cheap pizza, international food and other universal dishes to sate you.

I also recommend using Airbnb for accommodation, which is both cheap and easy, and you get an instant local contact who can point out the best cafes and restaurants in the neighborhood. Just be sure to find a place in Dorcol.

The touristy part of town is called Skadarlija, and while it's semi-Ottoman and semi-historical, it's become well-known for separating visitors and their money in expensive Italian restaurants. There are plenty of nicer places to eat in Dorcol or near the Knez Mikhailova.

Flights to Belgrade are about $250 from Istanbul's Ataturk Airport.

We happened to be in Belgrade during an art and design festival being held near the banks of the Sava. It was a street festival featuring art, music and design called "UTOPIJA" featuring a short block of booths selling handmade crafts, jewelry and a few fruit preserves. The space also boasted two big music venues, one in a warehouse, where we stopped and listened to some wild jazz. We bought a hotdog and watched an "alternative fashion show" held on the stairs underneath the Branko Bridge. In the show, one of the guys had black wings on his head like a Valkyrie, and another girl wore a Lycra butterfly body-suit, but otherwise it seemed like a normal fashion show to me. The models strutted down the stairs on either side of the bridge to get their pictures taken by lots of happy fashionable people in the audience with the "wing man" getting the most appreciation from the audience.

Later during the festival, we strolled through an outdoor exhibit called "The Forest of Problems," where people had written their problems on hundreds of pieces of paper hanging from the branches of the trees. Others would write answers on the backsides of the papers. In fact, all of the questions and answers can be found on the internet for those looking for closure.

The night before, my local friend Nena recommended a Finnish big-band show called "Anenkaisten Savel." I'll tell you what, it is hilarious listening to classic songs from the 30s and 40s performed in languages that they don't naturally adapt to. We listened to "Caravan" by Duke Ellington in Finnish, which actually left me wishing they'd had a dance floor. 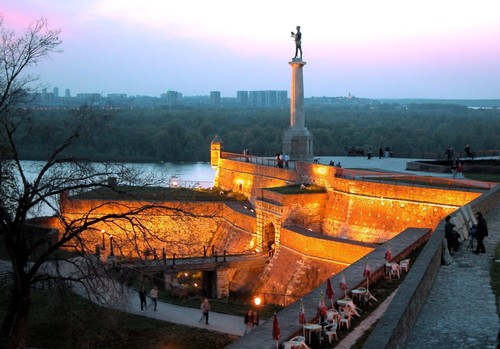 The town square is a castle situated in a park atop a bluff overlooking the confluence of two rivers, the Sava and the Dunav (Danube). Unlike some large urban metropolises, the city has roped off their castle and turned it into a public park, complete with fountains, greenspaces and happy park-going locals. Some teenagers were playing guitar nearby, giving it a romantic feel, but clouds of mosquitoes ate us alive, which made it much less so. Actually come to think of it, the teenagers made it less romantic too. Blink 182 doesn't really do it for me.

Underneath the Kalemegdan by the riverbanks, you can find the Ruzica Church, famous for its bullet chandeliers. You read that right.

Picture a long skinny island just offshore in a big, wide river, then seal off the ends of the river on either side of the island. Boom! Instant lake. Now, put 20 cafes on either side of the lake to serve Mai Tais to everyone, build a hamburger shack, but call what you're serving "pljeskavica," then wrap ham and cheese in hamburger meat and stuff it in a pita with tomato, cucumber and hummus, and charge $3 each. Now you have a feel for Ada Ciganliga. Visitors usually sit at one of the cafes drinking Mai Tais, eating pljeskavica, swimming every half hour or so and think about some useless pursuit. These locals definitely have their free time figured out. While at the lake be sure to look for the 50-foot spurt of water blasted into the air from a spigot on the lake's surface, and a Stonehenge-like zone humorously dubbed "Serbhenge" by the locals. Ok, I actually dubbed it Serbhenge.

Serbia was the throne of Yugoslavia. Marshal Josep Broz Tito formed a cult with his personality and played with the whole of Yugoslavia like it was his playground. Everyone loved him for it, except the people who didn't. After he died, the country fractured back into the ethnic and cultural divisions which had been there for centuries.

Tito Museum has three sections. A modern art gallery, which, it turned out, had an exhibit from Prota's art group Skart, a collection of artifacts given to Tito by every country in the world and Tito's actual mausoleum, including a map of the countries that sent a representative to Tito's funeral — and all that didn't.

A pedestrian boulevard that İstiklal wishes it could be, Knez Mikhailova is great street lined with cafes, ice cream vendors and pubs, and lots of beautiful people walking and enjoying the sunlight and company. Ranging from 50 cents to $1 for a cone stacked high with your favorites, the ice cream is really affordable. The Knez runs from the Horse statue in Republic Square (the Trg Republika) to the Kalemegdan, which sits on a park bluff above the rivers, where you can find Chinese food for a euro if you're lucky.

Zemun was the last European stop on the Orient Express, on the border of the Austro-Hungarian empire, while just across the Sava River was the first Ottoman stop, Belgrade. Consequently, the architecture in this part of town is completely different from the bleak, brutal communist concrete of the rest of the city, with Zemun featuring gilded roofs and embellished facades.

We went there with some artist friends of my Serbian aunt, Pera and Nena. Pera didn't speak English, while Nena claimed Pera knew more words but was shy, and neither one of them had any idea where they were going. We wandered up a forgotten alleyway and into an old neighborhood with nice view of some church towers, clock towers and War Island.

The island located in the middle of the rivers is called War Island. Pera told us it was made from the hulls of ships that had crashed together, and then Nena hit him on the shoulder and laughed. "Do not take this man seriously," she said.

Also found on the Zemun side of the river are two-story boats that have been converted into dance clubs. It's like a Slavic Mississippi River, but with less racism. Replace all that charming southern drawl with an Eastern European twang, and you get the idea. Some clubs offer more modern beats, but a few Kafanas – traditional Serbian live music halls – play plugged-in versions of Balkan folk songs, a genre called Turbofolk. It's pretty hard to listen to, but then again, everyone seems to enjoy it a lot. You can barely hear the singers over the audience shouting the lyrics along with them.

Our local friends took us home to our Airbnb and waved goodbye. When we got to the door, we couldn't finagle the keys to get it open. I buzzed three or four people and realized I could not speak any Serbian. I tried to asked people in English for help and said the words I knew in Serbian, da (yes), kuce (dog) and problem (problem), but nothing worked. We went to a nearby bar and thought about what to do, and then asked one of the people at the bar if she would speak to the people on the intercom and ask them to buzz me in. She came with us, fiddled with the door and got it open in ten seconds. "I am from Belgrade. We are used to broken doors," she mused.