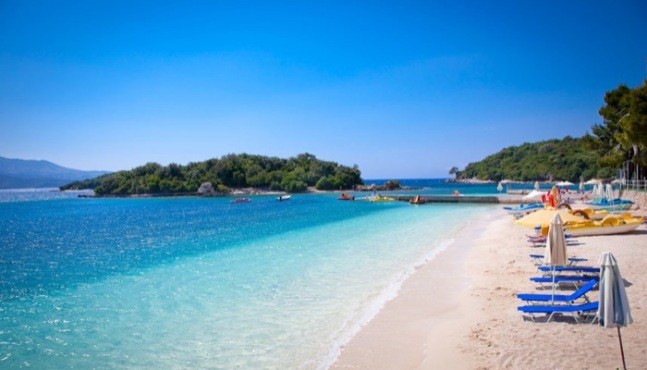 We thought summer would never come, but it is finally here and hotter than anybody expected. If you are scrolling through options to where to go on vacation, the Albanian coastline might be the answer you are looking for

After a long, wet winter and lackluster spring in Istanbul, it's only understandable you'd be looking for quality Mediterranean beach time. Many travelers first recommend you try out Italy's Amalfi coast - a famously beautiful drive of picturesque towns and sculpted limestone cliffs. It's also jammed full of tourists and Mafiosi with yachts.

So, my travel companion and I settled on Albania instead. Snuggled between the Adriatic Sea and the Balkan Mountains, Albania has just as good a Mediterranean Riviera, with comparatively fewer tourists and Mafiosi, and is about a zillion times cheaper. It's got a pinball history of tribal conflict, time under the Ottoman reign, and paranoid, isolationist midcentury Communism. What's not to like?

We flew into Tirana for $50, rented a car ($25 per day), and hit the beach (always free). We found all our places to stay on booking.com and paid less than $30 a night for private rooms - though dorms are available for $10 or less in the bigger cities like Durres and Sarande. Meals were inconsequential in price and astonishingly good - on the Albanian coast, Greek food is king.

We'd heard wonderful things about the Albanian coastline and the villages that dot its shores, but our trip felt like a post-apocalyptic honeymoon, equal parts beautiful and eerie, driving through towns of unfinished concrete buildings and sunbathing on deserted beaches. I guess I can't complain - I came to the Albanian Riviera to get away from the tourists, and I got what I wanted. And the coast itself is pretty unbeatable. Here are the highlights from our brief drive down the discount Amalfi Coast.

The coastline upon first glance was a rugged thing, pale jagged rocks jutting out above green slopes. Occasionally, we'd spot a village bus, in all its janky glory, chuffing along and hugging the curves of the coastal road. Just outside of Tirana, the road lifted off from the coast. We had no idea where we were on the map, and wondered if we'd taken a wrong turn onto a strange peninsula out into the Adriatic. From a meandering exploration of empty condo towns, we were suddenly in a mountain vale. It was astonishing: parabolas of green earth curved up and closed us into the valley. We lost sight of the water as we climbed. We saw a lot of cows through the fog, mooing plaintively. Little village houses sat on lumps, overlooking their own private valleys. The road twisted higher along the slope, and the fog got denser. We slowed to a crawl. It was a little nerve-racking. The clouds broke as we crossed the summit, and we gasped. The mountain sank all the way to the ocean below in one long slope. Our highway glided across the coasts before us. We parked at the Panorama restaurant and took pictures. We came down the hill and approached a small city.

Durres is the closest city to Tirana, and was the ancient capital of the Albanian kingdom. Now, it is a ghostly stretch of unfinished beach condos. The wind blew garbage around in the streets. Shopkeepers, once they had our attention, were reluctant to let us go. I got the impression that it had been a long time since anyone had come through. We parked at a hotel and scrutinized the beach: It was grey. It was windy. It was empty. The tiki umbrellas were upended, or stacked, or blown into drifts. We took pictures of ourselves frowning, and left.

What I loved was the contrast of development: the main strand seemed to be plucked from any California condo town, but as soon as you moved off main street, the roads became weeded dirt paths where locals parked their tractors and cows.

We lifted off the coast and were treated to another series of spectacular mountain views, and slalomed down a slope to end up in Himare, a navigable roll of road underneath the mountain. The town of Himare was a single avenue along a walled beach, with a tangle of residential backstreets sliding up the coastal slope. Durres' beach had been flaky rocks - though tiny, this beach had real sand. Only a few locals were sunbathing there that day. We walked along the coast, hungry from only having eaten road food that day (nuts, bread, cheese, etc.) and got a gyro and a free glass of rakija from the gyro guys.

We'd booked a room at Himare Hostel that night for 20 euro for a private room. It was a pretty neat place; the front gate looked like the entrance to Oz, if Oz had a mechanical bell rigged up with spare bike gears and chains. Inside, they had grape trellises and bikes hanging from hooks on the bright blue walls. The owner, a youthful man of about thirty, did not speak great English. His dog just had puppies, and we played with the furry critters. That night we went to Lefteiros' Taverna, and had garlicky Greek seafood and yogurt appetizers.

This is a good time to talk about a slightly unusual good-luck custom found in Albania. For tax reasons, many Albanians add rebar to the top floors of their houses. The rebar sticks out about three feet and makes all the buildings look like skeletons. Unfinished buildings are in a lower tax bracket than finished buildings, so you can stick some rebar in your roof, and tell the government you're waiting from money sent by relatives from abroad to finish the successive floors (which, in many cases, they are).

However, to protect these unfinished buildings from bad luck, the macabre custom is to take a stuffed animal or doll or some sort, tie a rope around its neck, and hang it off the side of the building. These creatures get left outside through years of moody climate until they have become battered homunculi, wretched familiars so horrible that nobody, not crows nor criminals nor tax agents, would ever want to come into the buildings. We'd seen a Daffy Duck doll so weather-beaten it had turned completely gray. We saw a scarecrow next to some abandoned brick factories, a scarecrow assembled from wires and wet paper bags. We saw dollies with their eyes hanging out, and teddy bears lynched from the highest tower, and action figures left to dangle against the walls.

So, although we were horrified when we saw a mannequin head impaled upon a spike outside a gas station at Qeparo, we were not entirely surprised. Although the whole point of this trip was to prove that the cheaper, more exotic Albanian Riviera was equal to or better than the Amalfi coast in Italy. The first indication this might not be the case was this mannequin head, done up in makeup and with a pick bandanna, impaled upon a spike. I grew sad. We heeded not the omen and proceeded to the beach.

It was a rocky stretch of abandoned shacks along the Adriatic. We passed a Danish hippy bus and I stopped the car to change into my red, white, and blue speedo. America!

A man walking opposite some pigs came up the road. He had wiry, dirty hair, a heavy black canvas trench coat much too hot for the weather, and a snarl. He was holding a flaccid piece of black rubber tubing in one hand and a handful of rusted, twisted metal hooks in the other. He stared at me. I stared at him.

"What do you want?" I yelled. He jerked his head up and flicked the switch over his shoulder. The pigs hooted in the mud nearby. I got uncomfortable, got back in the car and drove off.

"Maybe he was herding the pigs?" Anna suggested. We drove to the end of the beach, turned around, and then drove back up the road. As we passed him again, pig-man stopped to stare at us. I drove faster, and wished I'd kept my shirt on. 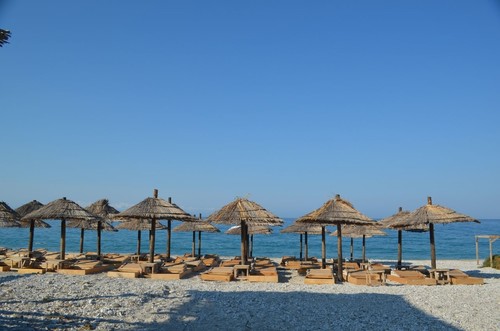 Our next stop was through the village of Borsh, where the men were selling milk from tractors in the road. A bunch of hollowed-out resorts stood on either side of the single lane road, and we followed a dirt path through what looked like a jungle to the beach. Finally, a real beach, although still completely deserted. There was a small cafe/bar and some beach chairs and we took out our shorts and read books on the beach chairs. There was a broken concrete pier jutting out into the water, and the beach was made of tiny sharp flat pebbles.

After about an hour of genuinely relaxing beach time, a guy approached us and was like "Italiano?" and we said "Americano!" and he said, "Fresca!" I immediately thought of the grapefruit soda. "Fresca?" we asked. "Fresca, Fresca!" he said. He brushed the air with an impatient gesture and smiled. "Fresca, fresca, fresca!" and mimed shivering, and then we got it. We looked at the sky: potent clouds had obscured half of our sunlight. It would soon be cold. We left.

We almost didn't stop in Sarande, but they had a neat castle (called Lekures). It's situated right outside the city proper on a summit overlooking the coastline. We drove up the hill to where a few guard cows kept watch over a parking lot. We parked, offered our respects to the cows, and climbed up and into the castle. From the recently renovated battlements we were offered a view of the sprawling archipelago below, islands like floating ice cubes on the surface of the turquoise ocean, small towns and glacier-gray condos clustered together on the shore, made as small as mushrooms by the rolling green mountains arcing down the coast. On the other side, a band of yellow beach made a sine wave up to the horizon. It was, as I've said, pretty unbeatable.

Our trip across the Riviera had to stop here, since Sarande was the last town before the Greek border and we were out of driving time. But if you wanted to extend your trip a little bit, there are a few good cultural options outside of Sarande. There's the ancient city of Butrint, a UNESCO world heritage site. It's the remains of a Roman city, stone pillars and standing churches on a forested peninsula. There's also the Monastery of Forty Saints, or the Ksamil islands, or the ancient town of Finiq (named for the Phonecians, naturally). We were overloaded on concrete, so we opted for the Blue Eye Spring as a change of pace. I find it amazing that one can traverse the entire Albanian Riviera, stay in derelict hotels where all the plaster flakes off in huge chunks, have a beach to yourself, and then go visit some long-ignored Roman ruins and hike all over them.