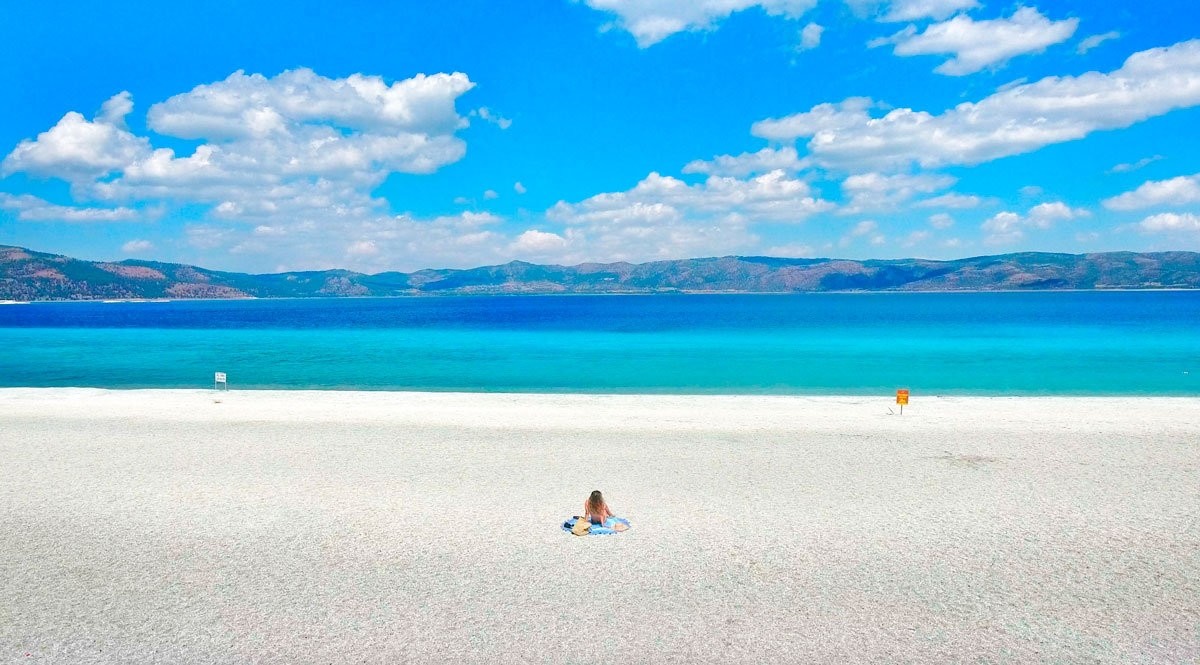 Located in Burdur's Yeşilova district, Lake Salda becomes a hub for tourism during the summer months thanks to its Maldives-like coast.

Known as the "Turkish Maldives," the shores of Lake Salda are known for clear waters and white sands. The lake not only offers tourists a chance to have a good time on its beach-like coast but also gives visitors the opportunity to enjoy some of the best views in the region.

The lake has become a center of attraction with the posts of visitors on social media. Rising in popularity, the region has become a hub for camping, with camping sites and hotels being developed in the region. The lake not only attracts people who want to enjoy swimming but also outdoor sports lovers, with bicycling and underwater diving tours organized around the lake, where photography enthusiasts can also enjoy a once-in-a-lifetime experience.

In 2011, the 12-hectare (29.6-acre) recreational area around Lake Salda was turned into a nature park by the Regional Directorate for Nature Conservation and National Parks and, as part of the renovation, a section of the nature park was designated to serve as a camping site operated by the National Youth Camps organized by Ministry of Youth and Sports.

"Lake Salda is the tourism hub of the future," said Burdur Governor Şerif Yılmaz. Stating that Lake Salda does not only welcomes tourist in the summer time but also in winter, Governor Yılmaz noted: "Lake Salda is one of the lakes which has the cleanest and healthiest waters in the world. When you look at the lake, it is possible to see the bottom of it through its crystal clear waters. Thanks to the pristine soils around the lake, the sand looks white which make it resemble the Maldives strikingly. It is one of the places where people can become one with nature."

Governor Yılmaz also reiterated that there are accommodation facilities around the lake allowing tourists to spend the night and enjoy their time in nature longer.

Uğur Yıldız, one of the visitors at Lake Salda, said he saw the beauty of the lake on social media and traveled to Burdur from Denizli with his friends. Stating that the view of the lake is mesmerizing, Yıldız said: " I have never been in the Maldives but I surely have seen pictures. As far as I can tell, this place looks exactly the same. Lake Salda is promoted as the 'Turkish Maldives' on social media as well. We are having a lovely day."

Another visitor, Cem Uygun, said he came to the lake with his friends from Istanbul and stressed that the view of the lake is breathtaking.

Photographer Emre Cebişli said he traveled to Burdur to take beautiful photos of the lake as well as its surroundings. Touching on the beauty of lake's view, beautiful waters and white sands, Cebişli said: "It is truly the Maldives of Turkey. The photographs will come out beautifully. The colors look amazing."