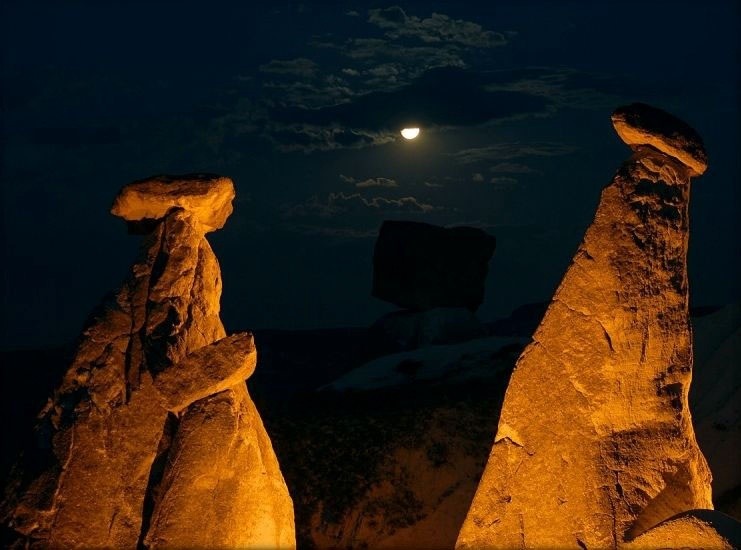 Cappadocia, the land of fairy chimneys, is always associated with hot air balloons and cave hotels but new moonlight walking tours allow tourists to see this dream-like landscape in a different light

Known for its heavenly natural beauties, history and cultural richness, the city of Cappadocia, one of Turkey's most well-known tourism hubs, is now offering "full moon walks" to tourists strolling around the fairy chimneys. Offering fabulous scenery for participants, the full moon walks have been initiated amid aims to add variety to Cappadocia's tourism sector.

The full moon walks, which begin at sunset, are conducted along valleys in the region and are held on various routes, the most popular of which begins in the Kızılçukur Valley and ends in the Meskender Valley. 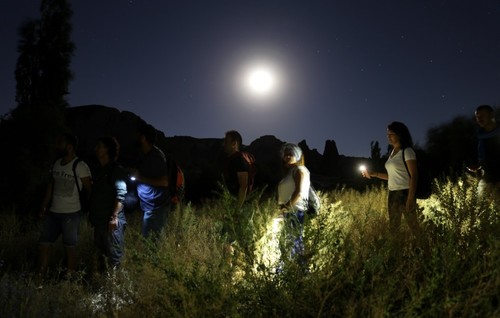 Groups of moon walk participants also enjoy taking a break at the historical monastery situated in carved rock in the valley, where some people even perform "halay," a traditional Turkish line dance.

The moon walk offers an extraordinary experience for participants and will also be initiated at other tourism centers across Turkey.

Yunus Ünal, one of the event's organizers, said that the full moon walks were launched amid aims to offer variety in tourism and to attract more attention from tourists.

"We began promoting the full moon walks recently. We believe that offering walking activities at sunset in Cappadocia give tourists the chance to experience the nighttime beauties the region has to offer; including the reddish, yellow colors of the soil, in addition to the splendid scenery that is visible during daylight hours. The full moon walks have become the most popular slow-paced activity in Cappadocia," said Ünal.

The moon walks are conducted under the moonlight and participants walk between the fairy chimneys and natural rock formations. Similarly, full moon walks are being planned in the Taurus, Nemrut, Süphan and Kaçkar Mountains, where touristic hiking and trekking events are organized.

Ünal mentioned that as tourist guides they provide information and advice to tourism agencies regarding the organization of such activities, adding that it is possible to organize various routes at various tourism destinations across the country.

"Turkey is located in mountainous terrain; namely, with the Kaçkar Mountains in the north and the Taurus to the south. In the Mediterranean region, there is a well-rooted route in terms of historical, cultural and geographical means; namely, Lycia. On a route starting from Niğde's Çamardı and reaching the regions of Sokullupınar, Yedigöller and Karpuzbaşı, full moon walking tours might be organized in the near future," he said.

"Also, the Nemrut and Süphan Mountains in eastern Anatolia are also quite favorable for such tours. That's to say; in Turkey there are so many walking routes that are suitable for full moon tours. To be able to get rid of the monotony of touristic activity, we have to be come up with various, innovative new approaches to it. In addition to weekend and daytime activities, it is also possible to revive tourism via full moon activities conducted at night," he added.

One tourist participated in the full moon walks in Cappadocia, French tourist Guillo, who stated that he got to witness the region's unique beauty that is illuminated in the moonlight at night.

Guillo said, "It is nice to walk through Cappadocia during the daylight hours; however, especially after the sunset and under the full moon, stunning views arise that are illuminated by a combination of the moonlight and the beautiful nature in the valley."

A tourist guide who attended the full moon walk Emre Ardık implied that the region is quite favorable for full moon walks thanks to its soil structure.

"The minerals in the soil in the valley reflect moonlight very well. When the sky is a coal-black color, it becomes quite easy to observe how this volcanic land shines. The valleys also offer a very comfortable walking atmosphere, which makes the scenery truly priceless," Ardık said.

Cappadocia: The land of dreams

Often referred to as one of the must-see travel destinations in the world, Cappadocia, located in the Anatolian region of Turkey, is preserved as a UNESCO World Heritage site and is famous for its chimney rocks, hot air balloons, underground cities and boutique hotels carved into rocks. The town is also famous for its authentic Turkish restaurants and offers samples of international cuisine at the dozens of dining spots operating in the region.

Tourist venues include the Göreme Open Air Museum, the ruins of Zelve and Paşabağı. The underground cities of Kaymaklı and Derinkuyu are among the most visited sites in the region. Although the region is most famous for its hot air balloons, tourism officers try to give you a breath of fresh air with new touristic activities in Cappadocia.