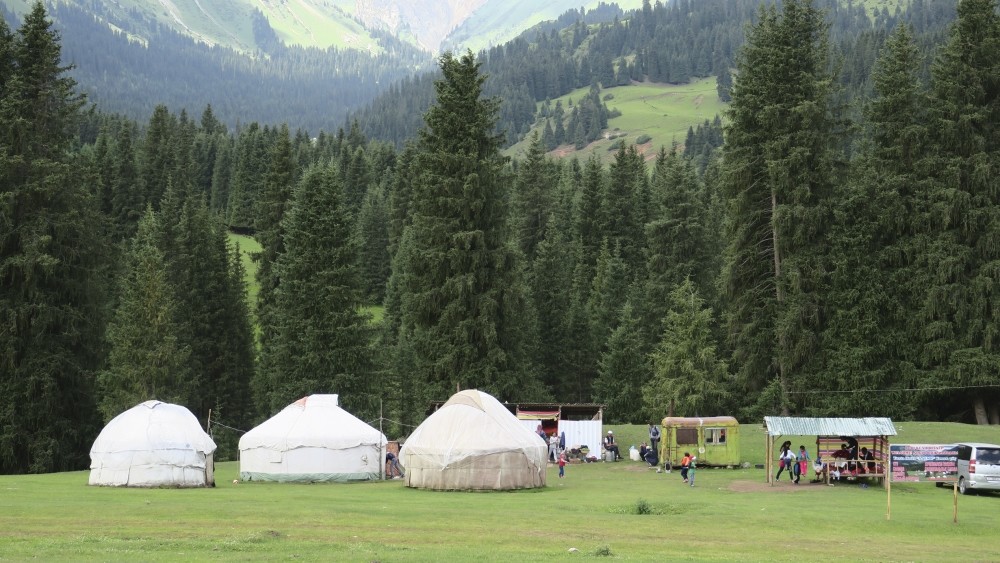 Located on the slopes of Terskey Ala-Too Mountain, Jeti-Ögüz Canyon is popular with local and foreign tourists for its natural beauty and clean air along with the mare's milk treatment center.

Jeti-Ögüz Canyon in Kyrgyzstan attracts local and foreign tourists to its mare's milk treatment center. The canyon is located on the slopes of Terskey Ala-Too Mountain, 28 kilometers from the city of Karakol on the south shores of Issyk-Kul. The canyon takes its name from its red sandstone cliffs that resemble bulls lying side by side and married couples often visit a hill there that resembles the shape of a broken heart.

In addition to its beauty and clean air, the mare's milk treatment center in the canyon is an attraction center for tourists. The yurts in the canyon house a health center with a thermal facility that provides mare's milk and accommodations.

Giving information about mare's milk's effects on cirrhosis, gastritis and wounds, Namazov said that the treatment period continues for 10 or 15 days, and when the milk is drunk according to the instructions, its benefits increase.

Namazov explained mare's milk has a lower fat content compared to other milks and it better health benefits for the blood and body.

He said the milk should be drunk in two to three hours after it is milked to be most effective, and if milk is kept waiting for a long time, it will lose its effects.

"Our ancestors drank our national drink kymyz [fermented mare's milk], but we have recently chosen to drink it unfermented. This makes its effects more effective."

A resident of Osh, Ronat Ahmatov said that he came to the canyon to see the broken heart hill and loved it very much.

Drinking mare's milk for three years in the Jeti- Ögüz Canyon, Bubaysha Toygonbayeva said that she and her family drank the milk five times in a day and they began to feel better.

Toygonbayeva also said that the canyon's nature and air are good for respiratory illnesses.