Brno: Take a detour in the Czech Republic

With its castles, organic markets, mint and underground tombs, the Czech Republic's second largest city Brno is worthy of a detour during your trip to the country

Though the castle offers the best views, high above the Czech city of Brno, the views above aren't the point. Inside, they were performing William Shakespeare's "Hamlet." What an incomparably good spot to perform "Hamlet," anyway, in a castle, but that's not the point either. You can see every cool thing of historical import within 10 seconds of lizard-like gazing from atop the castle's precipice. But all the best parts of Brno are at street level, or beneath it. Not just in the sense of culturally speaking underground, but literally under the ground. 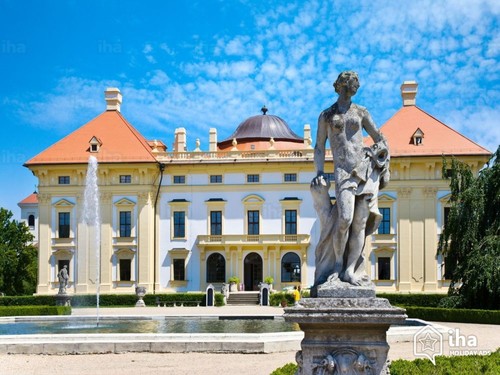 A bit of backstory first. Brno residents were a prosperous lot, and protected their great stores of smoked meats, cheeses, wines and grains in underground cellars. They squirreled away their best goods from their nosy neighbors. Many were dug underneath the Zelny Trh "Cabbage Market."

Zelny Trh, a market in need of a vowel salesman, has been operating continuously in the same square for the last 700 years. It was 100 percent aunties and grannies selling turnips, apricots, and other bright veggies, and it's easy to imagine how the custom's been kept alive. It's a perspective on history which focuses less on the accomplishments of great men or the rise of empires, and more on the habits of the common people (and, I suppose, their cabbages). But that's just on the surface. Underneath the Cabbage Market, there's a labyrinth of cellars, crypts, tunnels and vaults all accessible to any adventure-seeking tourists. 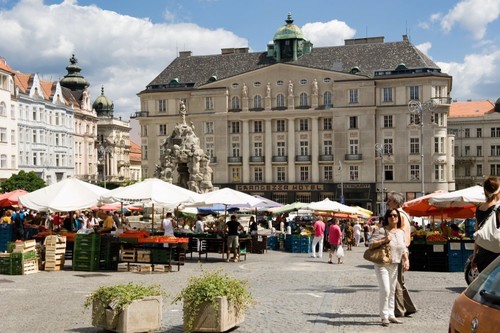 The city in 1999 got a grant to study the length and breadth of its underground network. After a survey, they opened the Mint Master's Cellar complex in 2007. That's mint in the sense of money-making, not the herb. (I kept expecting some herbal tea or something. The flickering bulb of my awareness only sputtered on when they made me a souvenir coin.) Inside, visitors for a pittance of 10 euro get to explore a cavernous labyrinth, full of recreations of a medieval burgher's stores, an alchemical workshop, and of course, the money press. I imagined myself as a Czech city boy, trudging down here every blizzard winter to enjoy my preserves of fruit, salami, cabbages, cabbages, and cabbages.

Is that it for the underground exploration? Are my spelunking readers satisfied with their subterranean jaunt? I think not. More backstory: In the middle ages, people died fast. During plague years, people died so fast the Catholic church in Brno briefly used "dumper" coffins with a false bottom, so the body would plummet into the grave, and the coffin remained empty, ready for re-use for the funeral later that afternoon, and also the six funerals tomorrow morning. Brno residents were not pleased, and eventually forced the discontinuation of dumper coffins.

Anyway, death came from disease or battle or numerous other completely preventable causes if you have medicine, capitalism, understanding of germ theory, or plastics. The bones of the deceased got put into Christian graves next to the church. The huge and obvious problem, of course, is lack of real estate. It's hard enough to find a flat to rent downtown, let alone when all the prime land has already been taken by all the dead people. Town leaders weren't keen on giving the church any more burial plots, so the priests worked out a good system: They buried people, and then after 10 years, dug up their bones and threw them into a much larger hole. Then the old grave is once again unoccupied, and you can bury a new dead guy in there! So runs this intuitive system of holes, dead people, and real estate.

This is all a roundabout way of explaining what the Ossuary is. It's the aforementioned bone repository underneath the largest cathedral in Brno.

During another public works project to uncover the length and breadth of Brno's tunnels, and perhaps open something similar to the Mint-Master's complex, officials discovered this Ossuary: An underground hall of brick full to the brim with the bones of approximately 50,000 people. So the officials did what any totally normal, totally cool guys would do, and got an EU grant to build a museum. Half the bones were glassed off in the vault so visitors can see what the researchers originally found, but the other half are a bit more interesting. The bones are now "tastefully and artistically arranged" into a spooky tibia wall polka-dotted by skulls. Add a few modernist sculptures, some especially composed music, and voila! You've got yourself the hottest five-euro ticket in town. 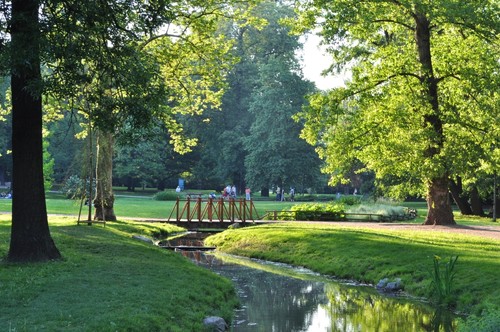 Had enough of lightless caverns beneath our dusty crust? Didn't think so. Third prize in the "underground places you can go in the Czech Republic for 5 euro" goes to 10-Z, a former air raid and nuclear fallout shelter. It was top secret, decommissioned, and then transformed only recently into a museum slash bar. Inside, on top of ventilators and electrical equipment, the curators have placed TVs from the late 50s playing short informational videos. Most are interviews with technicians, or with wizened Czechs who hid out here during WWII. Somewhere, a recording of a dog barks. Rows of fatigues are hung up on the bare concrete tunnel walls at the front door. Charmingly, next to some of the exhibits, old school phones implore visitors to pick up the receiver and listen to recordings about the purposes of all these ancient objects. Many of the signs were purely in Czech and therefore meaningless to me, but I still enjoyed looking at the rooms with old newspapers. In the cafe just outside the bunker's doors, a TV plays old animated advertisements from the Communist times. Did you know that even communists had animated ads? I figured the point of communism was to eliminate the need for ads altogether. (Note: as long as you look fresh-faced, anywhere in town will give you a student ticket.)

For me, travel involves learning about the history of places which aren't your own. I barely had a grasp of American history before going on this long series of escapades to the corners of Europe, and each time I go out, the history of others becomes real to me, in a way. It's so unnatural to think of history outside of our own nationalistic perspectives. I like the discomfort. Also the protection from radiation. Anyway.

Oh, but comrades, do the layers of secrets run deep. There is yet a fourth hidden place for a five euro price, but of it I cannot speak. (The mystery is half the fun). You have to visit the Super Panda Circus. It's a restaurant in another dimension. Curtains veil their door. A doorman will sweep you in when you hit the buzzer. Their menu isn't paper, but a mystery pegboard of toys, and you kind of don't know what you're ordering. Everything you order comes with a surprise. (I got a temporary tattoo which read "I am a panda!" in Czech). I don't want to spoil it for anyone else, so that's all you get in this column. Tantalizing, I know.

Last and least, because it's above the ground and totally un-secret and who cares about that, Brno cafe culture maybe outclasses even Istanbul. Here's why: It's a provincial university town. Brno attracts students from all across the EU. It's got what, four universities in a town of 200,000? There might be more cafes than churches, but because there are only a few great spots to hang out, you have a good chance of running into some local friends no matter where you choose to go. (I was staying with some local friends, and they ran into someone everywhere we went, so).

Cafe Podnebi has the best garden in town and keeps a quiet vibe, despite the struggle for outdoor seating. They're also visited every so often by the only wild goat in the city. The Praha Cafe next to the Moravian Gallery is fantastic. You can drink your coffee on public sculptures of paper boats, and look across at a wild zigzag sculpture of grey and red aluminum, fittingly entitled "Zigzag." Vycep Na Stojaka, which means "No sitting allowed!" doesn't have any seats, as its name suggests but it's right next to the curb, so everyone just sits down outside on the cobblestones. That one place alone transformed a sleepy square behind a church into the most mega funniest flat space in the whole town. Cafe Spolek started a boom of funky modern cafes and offers a full range of small lunches and designer coffees.

Though my favorite was in the middle of Namesti Svobodi square, where locals had set up a nameless impromptu tent selling different varieties of lemonade. Around the square's fountain sit a bunch of canvas chairs and pallets, so anyone can grab a drink and watch the city roll by. This is all right next to a smooth black obelisk. It's a clock, supposedly, as it's got four cylindrical sections, all rotating independently. There's no readout so it might be more useful as a sundial, except! Every day at 11:00 a.m. it spits out a marble from one of four slots. A (probably apocryphal) story: When the Swedish army was sieging the city in 1645, the commander in his hubris bet that his army would have the city by noon, or they'd retreat. The locals somehow got wind of this plan and set all the clocks back an hour, so the bells chimed early, and the Swedes stuck their hands in their pockets, and with an "aw shucks!" disappeared over the horizon. The local gypsy kids have figured out that these marbles are worth tourist euros, so they stand with their hands jammed up in each of the slots as soon as the actual clock reads 10, and then sell them later on. (Why marbles? Does anyone refill the marbles?)

Thus concludes our tour of Brno from the (under)ground up. As you sit at a cafe and sample some of the city's finest beverages, imagine what other discoveries might lurk just beneath your feet.