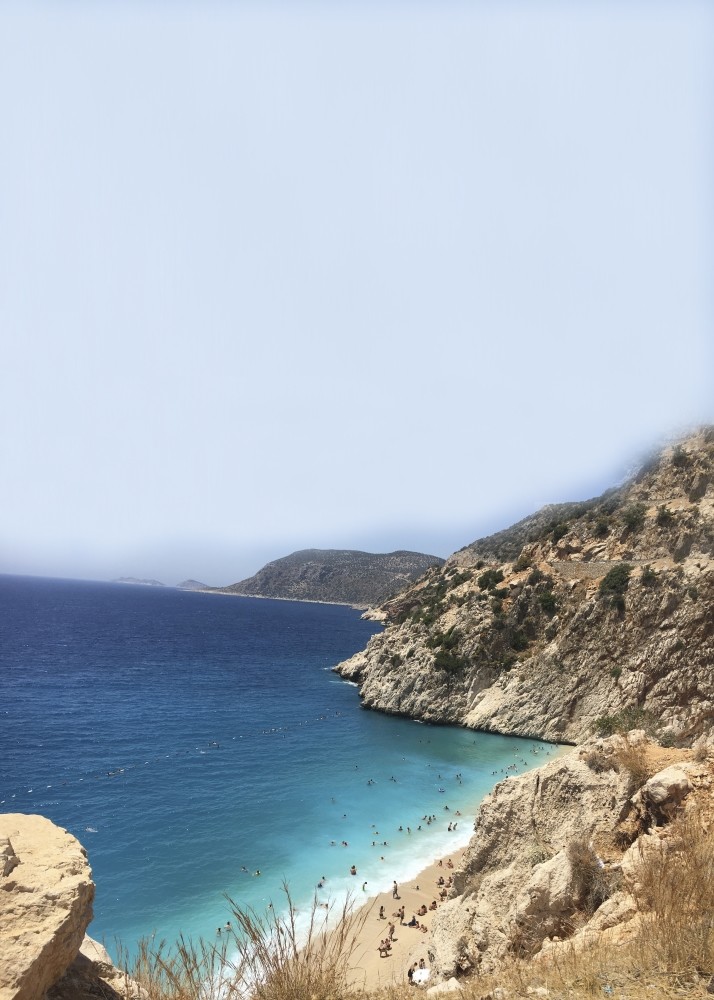 Antalya's Kaş district, renowned for its crystal-clear blue sea, has attracted attention in recent years for its diversity in tourism.

Situated in the westernmost part of Antalya between green mountains and the blue Mediterranean Sea, Kaş bursts with natural beauty. Those who come to Kaş, which has a summer population of over 100,000, often engage in diving, paragliding and hiking on the Lycian road, or enjoy swimming in the turquoise sea and visiting ancient cities like Patara and Xanthos, the former capitals of the Lycian civilization.

Kaş Mayor Halil Kocaer told Anadolu Agency (AA) that the port city of Kaş, the most important center of Lycia, has a coastline that stretches 60 kilometers (37 miles) in length.

Kocaer informed that in the 1600s the Lord of Teke observed Kaş and Meis from the top of the hill and said, "If Meis is the eye, then this place will be its kaş [eyebrow]."

According to the mayor, tourism began to pick up in the district of Kaş during the 1980s when it became a popular spot for hippies, a trend that brought a steady flow of tourists there from various European countries.

He also added that package tourism began in the district in the 1990s, pointing out that tourists come to the region from every corner of the world for diving, paragliding, hiking, climbing the plateaus as well as to enjoy the sea and sand. Highlighting that local tourists have shown the biggest interest in the district, Mayor Kocaer explained that Kaş, with its quiet and peaceful resting areas, has become a center for domestic tourism in recent years. "You can find the most beautiful coastal views here. No one bothers anyone and people can go swimming anywhere in the district. We welcome around 500,000 tourists on average, per year," Kocaer continued, informing that 70 percent of these tourists are Turkish and 30,000 of them have entered the port on yachts and boats, while Meis Island hosts about 35,000 tourists arriving and departing, as well.

Emphasizing that tourism in Kaş takes a different approach when compared to other touristic cities, Kocaer stressed that they want to continue with this tradition.

Kocaer pointed to the fact that there are mainly boutique hotels and guesthouses in the district rather than large resorts, indicating that families working in these businesses are in close contact with visitors and offer a homey environment and warm, sincere relationships. "This is what makes Kaş so different. Visitors have a nice time here in peace and safety. We want to continue to promote tourism in Kaş in this manner," Kocaer said, going on to explain that "We do not allow high-rise houses to be built. We are implementing new development plans in remote places outside of Kaş. We do not want to ruin the atmosphere of Kas. We dote upon the district," he added.

Suggesting that the diversity of tourism increases consumer demand in the district, Kocaer said Kaş tourism has held steady over the years.

Pointing to the region's unique geography as an attributing factor to the success, Kocaer said: "Not only our beaches but also the city's plateaus attract tourists. Namely, the Gömbe Plateau is quite attractive with its natural beauty and cedar trees. In the district, agriculture also comes to the fore and we have 40,000 acres of greenhouses."

Discussing tourists' appreciation for the 18-kilometer-long Patara Beach and the world-famous Kaputaş Beach with its turquoise waters, Kaş Mayor Kocaer said this beach has been in the news lately amid accusations that recent road construction is destroying the area's natural beauty. "We are trying to make Kaputaş more beautiful. The Mediterranean dual highway will pass near the area via a 600-meter-high [1,970-foot-high] bridge. This development has nothing to do with Kupataş and the beach will not be affected," Kocaer concluded.