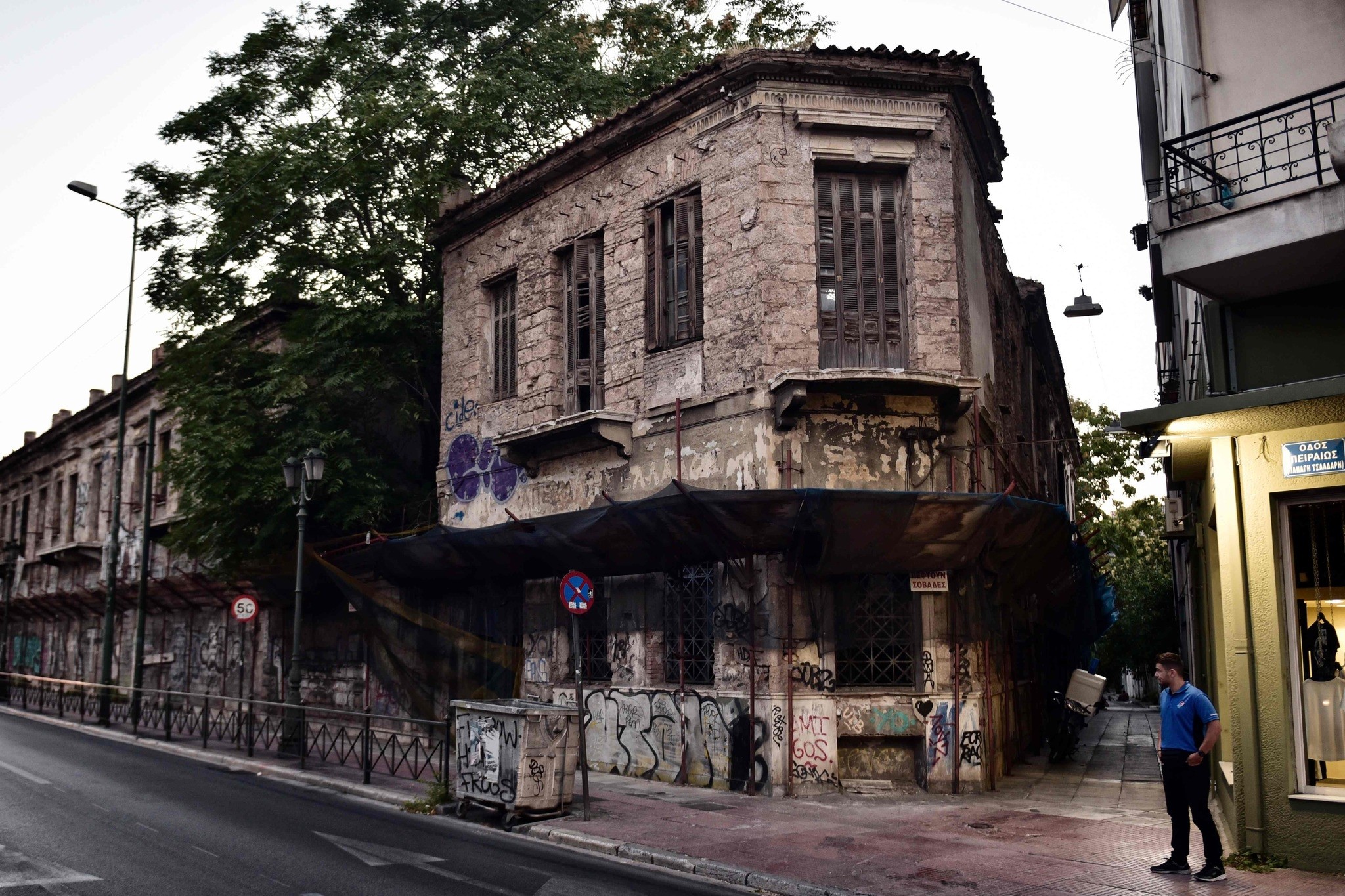 A man stands close to the abandoned neoclassical former Hatzikostas Orphanage in Athens.
by French Press Agency - AFP
Aug 14, 2017 12:00 am

Although in the shadow of its ancient hilltop Parthenon, Athens is also home to elegant architectural gems from the 19th and 20th centuries which marked its emergence as modern Greece's capital.

But their numbers are dwindling fast after Greece's long and devastating economic crisis left many with little option but to tear them down rather than pay for their restoration.

"Due to the crisis, it's expensive and difficult to repair these buildings, there is no financial help from the Greek state," says Maria Daniil, an architect, who specializes in buildings of the late 19th-early 20th century.

"People prefer to abandon or to demolish them," she adds.

In the 1980s, Daniil had access to state funding that helped her restore her 1936 family home in Koukaki, a neighborhood in the foothills of the Acropolis.

Occupying 300 square meters (3,228 square feet), it is an eclectic take on the neoclassical style with stone walls and concrete floors.

Like many houses of that period, it has high ceilings, enclosed balconies and mural paintings above the stairs that dominate the entrance.

Little more than a provincial town when Greece achieved independence from the Ottoman Empire in 1830, Athens was essentially rebuilt by Bavarian planners during the rule of Otto of Wittelsbach, the country's first modern king.

But just a small fraction of the buildings remain from that period when Athens was a young emerging capital with a mere 150,000 inhabitants.

They number around 10,600, according to Monumenta, an association that has compiled a database aimed at "raising awareness for the survival of the modern architectural heritage among authorities as well as owners."

"Most of these are abandoned, ruined, demolished. More than 80 percent of such buildings no longer exist," laments Irini Gratsia, an archaeologist and co-founder of Monumenta.

Many were torn down in the 1960s and 1970s, a period of chaotic expansion in the Greek capital, and replaced by concrete blocks of flats.

The new buildings, five floors high or taller, were meant to address the needs of urbanization that transformed the capital as it gradually attracted nearly half the country's population from rural, impoverished areas.

It also helped relaunch the Greek economy that was in tatters after World War II.

This urban phenomenon eradicated most of the elegant neoclassical facades that had been a feature of Athens' streets until then.

A law enacted that year under the tutelage of iconic Greek actress and culture minister at the time Melina Mercouri stipulated that the owners of neoclassical buildings were obliged to take responsibility for their restoration.

For a time, the new regulations managed to slow the onslaught of bulldozers.

But in the wake of Greece's 2010 economic crunch, marked by state spending cuts, tax hikes and a bank loan freeze, owners have once more been forced to abandon the buildings to their fate.

Two years ago, despite the efforts of Monumenta, a neoclassical house built in 1875 in a western district of Athens was demolished.

It was one of the last remaining buildings to have survived the capital's first urban boom, which eventually took it to half a million inhabitants during the first half of the 20th century.

The next wave of architectural innovation came in the 1930s when the Bauhaus movement charmed Athenians with its more practical character.

The cube-like houses lacked neoclassical ornamentation but incorporated modern comforts sought by the emerging Greek middle class, such as central heating and lifts.

One of Athens' most emblematic modern buildings, the U.S. embassy, was likewise conceived in the 1950s by German architect Walter Gropius, one of the founders of the Bauhaus school.