Traveling to Central Asia, all I wanted was to get a taste of the heyday of the Silk Road and the age of Timur, but, what I found in Samarkand and Bukhara did nothing but blur the terms east and west

Central Asia, especially in what is now known as Uzbekistan, was not always thought of as a remote backwater in the former Soviet Union. It used to be a thriving intellectual hub. Positioned between Europe, the Middle East, India and China, they figured out how to work the best deals from every side. They had complex engineering projects, usually to bring water from hundreds of miles away, sometimes through underground channels, to irrigate their soil. They developed cotton paper, to undersell China's brittle silk paper, and because it was so cheap to make, were able to do a lot of writing, translating and archiving. This was all before the Islamic conquest in the eighth century. After that, Arabic became a lingua franca and enabled new written knowledge to spread much faster. Algebra was invented in medieval Uzbekistan, so were some astronomical techniques and measurements still in use today. This part of the world wasn't just a caravanserai. It was a complex civilization in its own right.

Most of those great cities are now gone. Instead of European or Indian stone, the great buildings in Central Asia were all made from adobe brick, most of which has since turned to dust in the dry heat of the steppe and desert. What remains, especially in Samarkand, was thanks to Timur. In the 14th century, a mediocre Chagatai generalissimo named Timur seized power and conquered everyone, kidnapped all of the best architects, artisans and artists, and sent them back to his capital city.

Timur said, "If you want to know about our people, look at our buildings." A good premise for some great sightseeing! We marked a trail to Samarkand and Bukhara, two cultural powerhouses of the medieval world. I came to Samarkand and Bukhara to fulfill my inbred orientalist fantasies of walking the old Silk Road. They delivered, but my idea of what counts as east and west has since been twisted.

Due to utterly random but auspicious timing, on the first evening we arrived in Samarkand the city was rehearsing for its annual Eurovision spin off, the Sharq Taronlari. Every other year, Uzbekistan invites nations to send their best folk singers for a gaudy competition in traditional musical styles from around the globe. And, they compete on a wholly unique stage in the square of the Registan. Along with hundreds of locals, we peered over the fences. This was going to be high-budget, whatever it was.

From a distance, we could see the huge vaulted gates of the square, framed by domes, towers and mosaics. About 50 guys in pointed shoes and gold vests waited in the wings with flat camels to trod across the stage, just in front of a tiled Registan backdrop, to re-enact Silk Road trade. Dancers with flowery pink fans and a Chinese paper dragon leapt around in the middle. If possible, Uzbekistan had out-orientalized all my stupid orientalist fantasies. Give the audience what they like, I suppose.

The next day, we went to see the Registan up close. 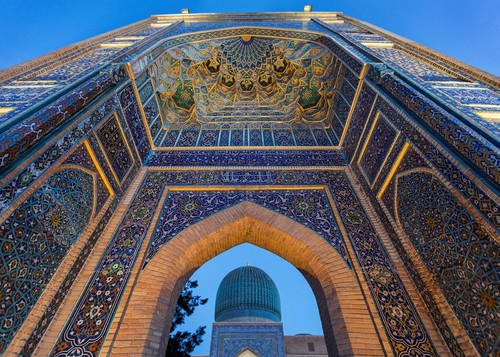 Much like the Hagia Sophia and the Blue Mosque, the Registan is clearly another case of one-upsmanship taken to the extreme. Three gigantic madrasahs, each framed by an intricately decorated gate, tower above the square. The first fabulous facade was built in the 1400s by Timur's grandson Ulughbek, featuring a blue mosaic of star-like constellations. It stood alone for almost 200 years before madrasah number two and three were raised next door. Tiled blue minarets, their tops all shaken off by earthquakes long ago, lean crazily over the square. Guttered blue domes balloon above the frenzy of mosaic work. My favorite mural was on the front of madrasah number three, as it most unusually features an image rather than just abstract design. Two tigers in a starry sky rear up on either side of the gate, and two suns with frowny faces shoot their rays out of the tigers backsides.

Shah-i-Zinda was another case of one-upping. Not content with being outdone in life with their madrasahs, the Timurid kings outdid each other in death, as well. A row of exquisite mausoleums, done in dazzling blue bas-relief, stand next to each other almost like a gated community of luxury condos at the periphery of a graveyard. Every surface had a rippling texture of designs and embossed Arabic calligraphy in green, blue and gold. There's no mistaking that this land was an economic, artistic and political giant of its time. The architectural styles here are influenced by Mughal India, including the mausoleum in Delhi commonly known as the Taj Mahal.

On to Bukhara! Here, ancient scholars figured out how to measure the dome of the sky in degrees. They debated religion, philosophy, astronomy and medicine.

Sadly, the entire touristic part of the city is under construction, except for a few monuments. We got to see the sloping bulgy city walls common to Central Asia, designed to keep out both dust and armies of nomadic horseman, but huge chunks of the walls have been pulled apart. Men were clambering all over them in the heat, building them back up. It's interesting to think how now these walls, instead of keeping things out, will bring more tourists in.

A huge chunk of downtown had been pummeled into rubble. Piles of bricks were everywhere. Across from the Kalyan Madrasah was a corrugated tin wall and half of an empty lot. Through a small cut-out door hole in the tin wall, we entered the old city and found a massive terrace perched between the buildings. It was a restaurant, run single-handedly by a cheerful bald man named Erkin. He was our first introduction to the city. He serves the best "manti" in the city, next to the fruity pumpkin, delicate meatballs and humble potatoes gracing his plates. His terrace also features a magnificent view of the Kalyan Mosque complex and its turbaned brick minaret. Much like the madrasahs in the Registan, Kalyan has two impossibly beautiful facades of mosaic facing each other, but a unique minaret stands between them. It's freestanding, set apart from the mosque, and is as fat as a sequoia. 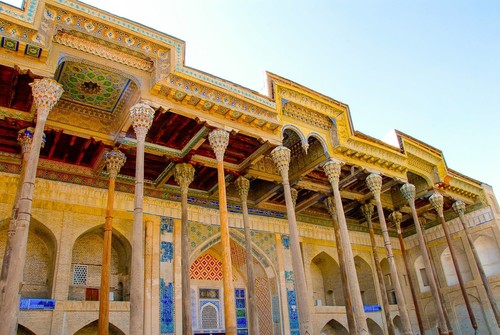 Its constructors put bricks in crosshatched rings, alternating their arrangements so as to create Escheresque tessellations around its bulk. Atop its tower sits a crown, a crenellated deck. Taken together, the minaret looks a bit like a giant Queen piece from a game of chess.

After a quick meal, we set out to explore. In the city we got truly lost in a central tangle of residential alleys. Kids were out on three-wheeled bikes, and local shopkeepers kept laughing, asking where we were from and pointing us out of the maze. Once we escaped, we found ourselves in a town square of sorts with a pool draped with mist between dust-colored brick buildings, all restaurants, bed and breakfasts or silk shops. A wedding band was playing all of the Uzbek and Russian hits, including "Yamansan! Yamansan!," which is now stuck in my head. Happy couples, families and friends either dined on barbecued skewers of beef and lamb sprinkled with black cumin or drank one of a variety of sugary cold drinks. "Kompot" is a watery raisin flavored juice, and "Mors" is an un-carbonated cola substitute. I opted instead for a "Muz Qaymak," a soft-serve ice cream made with banana and dribbled with fruit syrup.

And the people, I should mention, were colorful enough to stun and hypnotize even the aesthetically deficient. Traditional Uzbek fabrics, both cotton and silk-mixed, are gorgeous. They employ blotchy geometric designs in bright colors, proud with personality. Everyone walking by wore patterns on patterns. In the town square, several shops were selling fabric by the meter. I seriously recommend you grab a few and get your local tailor in Istanbul to make you a shirt or dress.

The next day we only had a little bit of time to sightsee before catching our train back, so we went to the Chor-Minor mosque. Hidden away in the back alleys of the town, this unusual mosque is tiny, but four fat minarets shoot out from its corners, each almost as wide as the space within. Each minaret is topped by a broad turquoise dome. Like most things in this city, it was remodeled by Russian engineers after years of neglect, but you can still get a sense of what it must have looked like long ago.

We had to bid farewell and get on our train to Samarkand and onward, out of Uzbekistan. The night we came back, we had time to stop at a local shashlik joint for dinner. Inside, a bunch of off-duty police were watching the opening ceremonies of the Sharq Taronlari. It was as gaudy as I'd hoped and even had fireworks exploding right over our heads, even as they exploded on TV in front of us. Fireworks were invented in China. The TV was made in Korea. The costumes were from every country that had come to the competition. Everyone was speaking Russian, Uzbek, English or some variety of Persian. What was east? What was west? Central Asia, with its ancient roots, remains a riot, a mix.