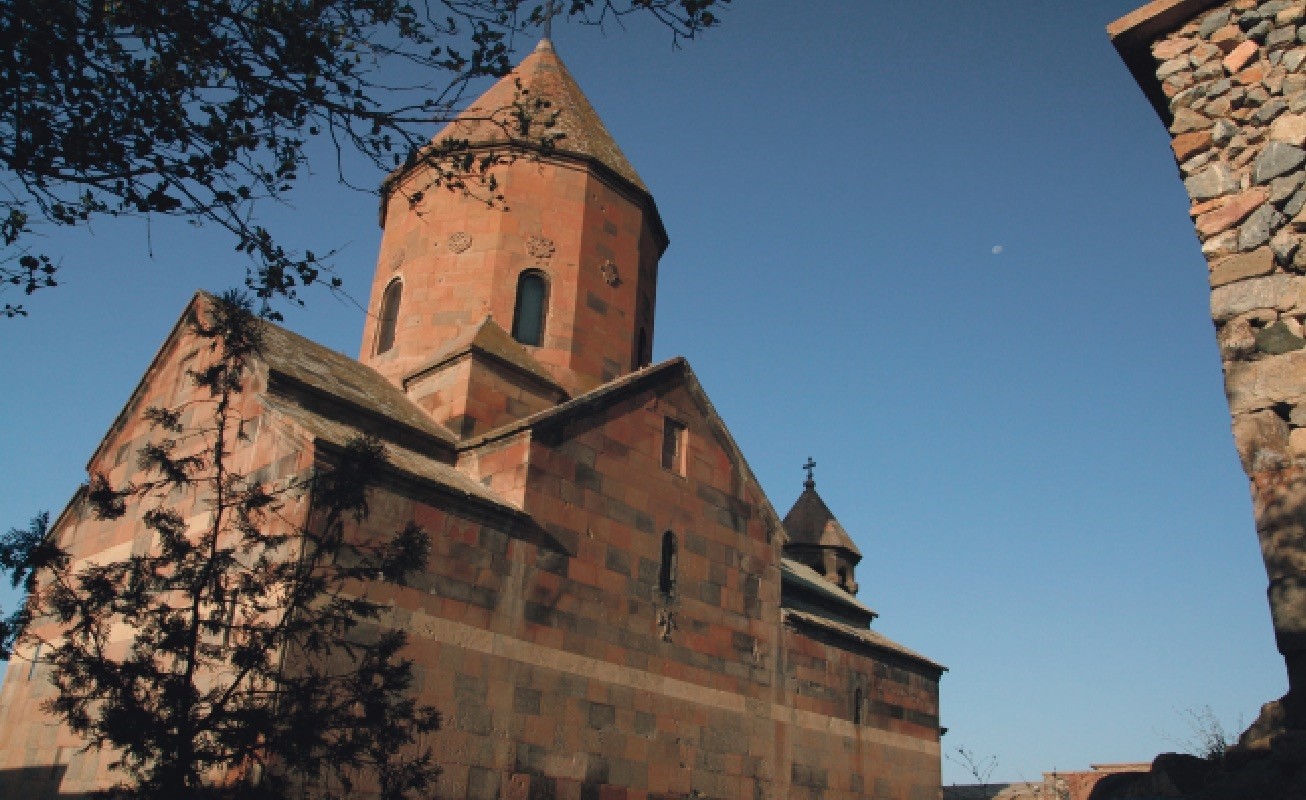 Armenia's religious architecture is like nothing you have seen in any other Christian country before. Hence, me and my team of wanderers set out for a journey to track down Armenia's most amazing churches and monasteries

Armenia was one of the first ever Christian countries, as the locals never hesitate to tell you. They were so excited about being the first Christians that scads of them ran up into the hills to build astonishingly beautiful and compellingly strange monasteries. They put stone cones on their tops, they decorated their graves with intricate braided carvings. For this trip, my team of wanderers went to Yerevan to journey what ancient faiths had inspired the locals to build.

We had selected a handful of the most architecturally unusual places of worship for our tour. On our first day of monastery-spotting, we actually got a package tour. I know, I felt like a total sellout. But Hostel Yerevan offered a four-hour excursion to see both Khor Virap and Noravank Monastery, which were both on our list.

Khor Virap has a dramatic placement: It juts out on a low promontory in front of Mt. Ararat rising behind it in the distance. Khor Virap means "deep well," in Armenian, but what it actually means here is "snake pit."

Let me explain. The story of Armenia's conversion is full of blood and betrayal. A nobleman named Anag assassinated the Zoroastrian King Khrosov II. Anag was pretty naturally executed in response, and his son Gregory fled to Cappadocia to be raised by the underground Christians in the caves. The pagan Roman Empire still considered Christianity borderline heretical in those days, but they tended to tolerate it as long as they kept out of the way of the state. Caves were therefore a convenient way to hide out. 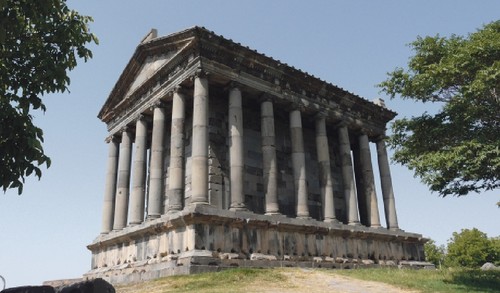 Gregory came back to Armenia as an adult to spread the gospels. At that time the king was still not too keen on the idea of a proselytizer, especially one related to a guy who had killed his dad, so Gregory was thrown in a snake pit at Khor Virap for 13 years. The local leaders hoped it would encourage him to abandon his new religion, but instead, the snakes supposedly lived down there with him in peace, subdued by his meditation, prayer, and superpower snake charming. His astonished keepers opened the door every day to find a smiling Gregory chilling with snakes, so they kept feeding him, trying to wait him out. It didn't work out for them.

Rather than becoming a martyr, he got to be snake king. I mean, a proselytizer. This was the draw of Khor Virap. We wanted to see the same snake pit, and hopefully, some snakes. We set out to the north, and the road got desolate. We passed through a few villages seemingly held together by wire and bricks. We stopped at a roadside stand to buy a sack of fresh orange apricots for 4,000 dram. Though it was an hour before we reached the actual town of Ararat, the mountain of Ararat was perpetually looming on the horizon. We took a right and could see Khor Virap across the flat plains, silhouetted against the peak. We threw apricot pits out the wall as we approached the monastery.

We parked and a man approached us, holding a dove. He had several more doves in cages. Our guide spoke to him and explained to us.

"If you pay him a dollar, you can take a dove up to the top of the monastery, and throw it off." Before I could even laugh, the man gave me the dove. I balked. I tried to adjust my grip, and the dove leaped at its chance to escape, flying up to alight on a power line above. The man demanded I give him a dollar. 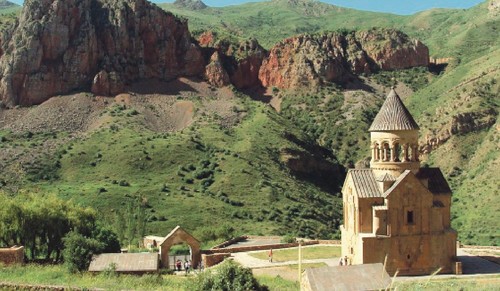 "It's not my fault," I said. "The dove escaped." The man was insistent, and so I gave him the dollar anyways. I looked up to the top of the hill, and watched a luckier and more sure-handed man than I throw his dove into the sunlight.

Khor Virap is set on a low and squarish hill in an otherwise flat green plain. Four castle walls surround an imposing stone cathedral peaked with a smooth cone. We climbed up the hill to explore the complex and, of course, made a beeline for the snake pit inside the chambers. We followed the few tourists to a back room where a line stretched out underneath a stone arch. We waited our turn, and then were let in. A black hole in the stone floor, and a ladder descending into it. The snake pit. We climbed down, one by one.

Snakes! Snakes everywhere! No, just kidding. It was empty, save for an improvised altar. There was enough space at the bottom to walk around, but not much more. The walls were black and covered in graffiti, presumably the last words of those who were eaten by snakes. I imagined being surrounded by hissing menaces in the darkness. Our hostel guy told us that last time he was here, a fat woman had gotten stuck in the ladder tunnel. It cut the spooky mood.

Next, we piled back into the van and tried to take excellent pictures of Khor Virap and Ararat behind it, but the clouds had obscured the mountain. We ate more apricots, sullenly, and drove for another hour up the narrow Amaghu river gorge.

Noravank was next on our list because it has the greatest collection of Khachkars anywhere on earth. The Khachkars are the carved tombstones of the monks who lived out their lives at these far-flung monasteries. The designs often look like Celtic knots, detailed spirals and ropes of crosses or animals on yellow stone.

Noravank is a tiny monastery on a tiny square block with insane carvings everywhere, positioned next to and on top of bright red rock cliffs. Noravank had been a crumbling wreck at the turn of the century, but new stonework has restored it to its glory - the same stone-box-and-pointy-cone design of Khor Virap.

The doors to the church were covered in carvings, so were the staircases, and so were the walls. Just above the outside doors, an absurdly narrow staircase protruded from the walls, up the sides of the church. We climbed teetering on our hands and knees up the odd staircase to the second floor belfry, and took silly pictures of ourselves meditating under the bell. We clambered down and peeked inside the monastery - it was almost barren, a sensory isolation chamber.

We examined the Khachkars in the graveyard and their twisting, obsessive designs, and wondered who and what had spent so much time making these things, so far away from civilization, so long ago, for the glory of God.

On our next day trip, we paid a taxi driver the equivalent of 30 bucks (27,000 dram!) to take us up to Geghard and Garni, a pair of temples sort of close to each other. First was Geghard, a monastery built into the side of a mountain. Its name means "Monastery of the Spear." It used to be called simply "the cave monastery," since it's built into the side of a cliff, and some of the complex's chambers go into the mountain itself. Of the monasteries we visited, this felt the most like a fortress.

A lot of other pilgrims had gathered in the parking lot, where enterprising grandmas had set up stalls to sell fruit leather and walnut candy. Stone walls surrounded the monastery complex, and we could see the black roof of the church itself, a cone rising out against the rough mountainside. We got out of the taxi and walked underneath the arch, inside the complex, and made for the church's door.

Geghard monastery felt alien. The wooden doors were covered by carvings in medieval Armenian, an alphabet which is basically a magic spell. Inside, it was dark and the ceiling was jagged and spiked, and made of black stone. The floor was made of tombstones. We lit some beeswax candles and explored. Art had been carved into every surface - every wall showed broad-faced animals and fat bundles of wheat, all in the same color of black bare stone. It was eerie. We bought some homemade green apple fruit leather from some grandmas as a snack, hopped back in the car, and drove up and down through a village to our final destination, Garni temple. Garni, for total contrast, is not even Christian. It is a Greek-style miniature pagan temple whose construction was ordered by a first century Armenian king to make the kingdom more Hellenic. It was destroyed by an earthquake in the 17th century, and the USSR, to their credit, rebuilt it. After Armenia's conversion to Christianity, most of the pagan temples were destroyed, but Garni endured.

It looked exactly like a small Parthenon - the columns, the roof, the bricks. It looked a bit like a jigsaw puzzle put together in a hurry - the colors of the bricks and columns did not always match their neighbor bricks and columns, probably due to an inaccurate (if still beautiful) rebuild. But it was at odds with the surroundings, a tiny Parthenon at the top of a jagged gorge delving to untold depths below. I spent more time looking out at the view than at the temple itself. We found Arabic and French graffiti carved into the temple from other archaeologists of a different age. Who else had come here to wonder at the temple, to look at the view? It seemed an appropriate place to contemplate our long and curious pilgrimage through an ancient, wondrous part of the world.