Eat your way through New York 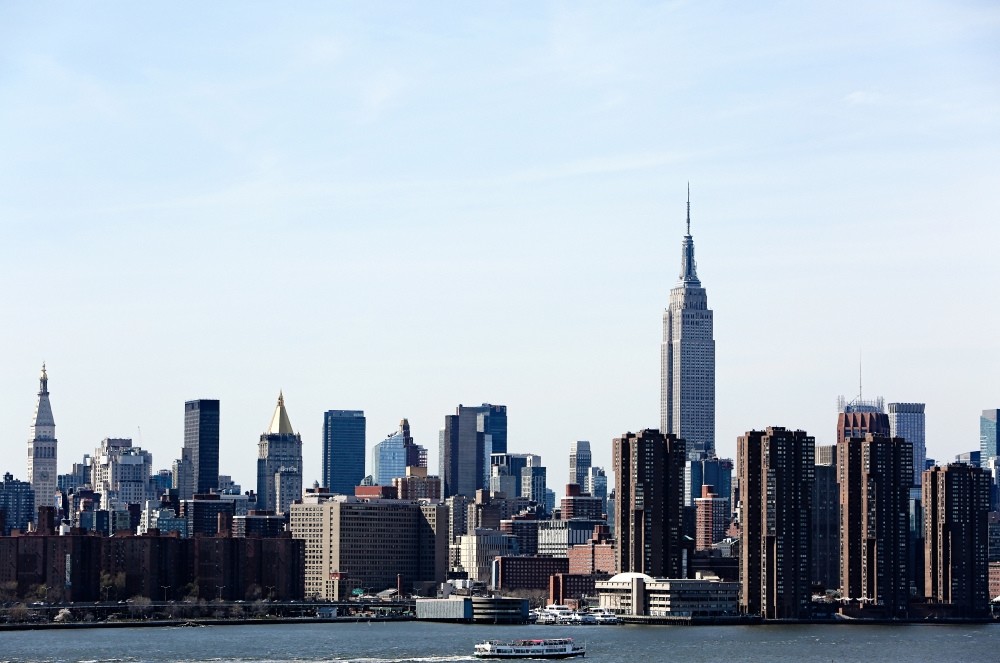 New York is the heart of the United States for some, but for me it is the perfect place to eat the traditional cuisine of numerous peoples, so this week, I spent a week in New York City eating everything I could get my hands on

New York City has no origin except as scrambled eggs. Algonquians, Dutch, English and then the immigrants of a hundred nations, all pouring into the same deep-water harbor, blending together in a shirred mess. Everyone has been living and, most importantly, eating on that 13-mile island for the last 300 years, and the culinary traditions are especially diverse. You know in some countries, how you can go from different biome to biome in the same afternoon? Snowy mountain to desert to beach to forest? In New York City, you can visit any cuisine from any nation by walking across the street. And a trillion new innovations.

For this article, I spent a week in New York City, and I really intended to write more about the sites. I really did. But mostly, I ate. I ate Greek food, I ate Italian, I ate Chinese, I ate cake. The sheer range of kitchen traditions defined my time in the city, and I collected some of my favorite culinary experiences to share with you.

THE BEST CHOCOLATE CAKE IN THE U.S. (The Bake Shop, 995 Flushing Ave.)

Brooklyn was like the idealized society, written about in some utopian fantasy. Farmer's markets. Food delivered to your door with many many apps. Donut boutiques. Unfreezing stacks of compost bins at the Farmer's Market. Like who would ever have thought of Spaghetti squash stir fry? Or chia with Greek yogurt? The iced Americano?

So they've had time to perfect the basics at Bake Shop. Inside, the place was decorated like a dorm room – black IKEA bookshelves, a leftover mannequin decorated in trash cloth, and five-dollar plants. The menu was written – also on a chalkboard – in a practiced careless scrawl. I liked it immediately. The Brooklyn Blackout cake came on a floral ceramic plate, and as we ate it, we blacked out. We went through time and space. We woke up in a cakey stupor, dark crumbs around the corners of our lips. We passed on our compliments to the baristas, which were repeated in Spanish to the chef. 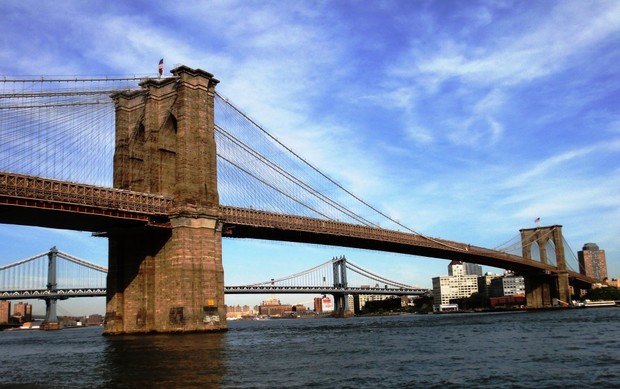 The death lasers of Times Square burned my eye skin until it had curled back like onion paper. Though it aims to dazzle, mostly it disorients. I saw a very short movie, projected on a screen wrapped around the corner of the building, which made me feel like I was zooming forward through a Tim-Burton-esque Halloween space. It was an ad for the new Michael Jackson album, "Scream." Isn't Michael Jackson dead? Truly, everything is possible in New York. I was here to eat alligator.

How do you feel about alligator sausage? I felt great about alligator sausage, which is why I ordered a plate of it at Manhattan's only Louisiana-themed restaurant, Bourbon Street New York. Is it Manhattan's only Louisiana-themed restaurant? Probably not. New York has everything. The cuisine of the American south is itself a patois, formed from African and American grains and vegetables, and Scottish and English cooking techniques. The best parts were all developed by African-American slaves, working with whatever little was given to them, and frying it into gold. Bourbon St. New York had it all – hush puppies (fried corn donuts), cheese grits (an American dish similar to Turkish muhlama), and barbecue – I hope you're familiar with what barbecue is. And in the swamp and bayous of Louisiana, the creole population worked with the local game – frogs and gators chief among them.

In what's been listed by Buzzfeed as "15 of the most disappointing moments of Ernie's short, disappointing life," Bourbon Street NY was out of alligator. So I also ordered a side of fried pickles with remoulade, and parmesan fries with truffles and ketchup. As they had a perpetual happy hour, I ordered a five-dollar drink filled with tropical juices rather insensitively called a Hurricane.

Think of the last time you put the words "fried" and "pickles" next to each other in the same sentence. Think of them being the same thing! What even is a fried pickle?! I will spare you the suspense: it is literally a fried slice of dill turşu. It tasted exactly like I expected. It is almost conventional as a fried starch, like potato or dough or even carrot, but sour and crisp and boiling hot on the inside. Apparently they were invented in Arkansas. I'm from the north; I know not these southern traditions. 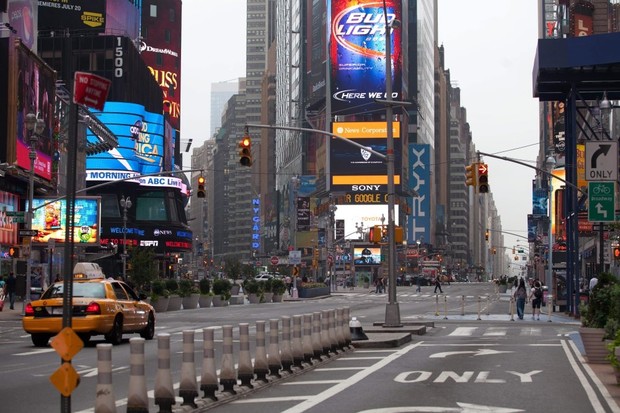 The most obvious thing to eat in New York is a deli sandwich. Romanian Jews brought Turkish techniques for making Pastırma to New York sometime a hundred years ago, so in a sense, this cultural icon has Turkish origins. The Pastrami on Rye is a classic New York kosher deli thing – mustard, Russian salad, sauerkraut, and dark toasted bread made from rye flour and caraway seeds.

For true aficionados the only place to get the sandwich is Katz's Deli. Katz's in the early 20th century stored barrels of meats and pickles across the street in a vacant lot, which is now a subway station, but they have since found the space to cure their own beef themselves. It takes 30 days to get mellow and soft and sliceable. For $20, you and probably two other friends could feast for probably two meals on the gargantuan, savory New York creation.

Spicy Village is the greatest Chinese noodle restaurant in the universe. They make traditional hand-pulled Henan noodles made from wheat. Here is a story from Spicy Village's website:

"It is said that the first person who ate braised noodles was Li Shimin, the first emperor of the Tang dynasty. When he was still a soldier he became sick. It was a snowy and windy day and had nothing to eat. He had no choice but to walk to a cottage and beg. The hostess was very kind and prepared something immediately. However, her family was also very poor, so she made some wide noodles and boiled them in pure water. She put the boiled noodles into a bowl and added some bone soup. Li Shimin liked the noodles very much, and did not feel cold anymore."

Afterwards, I walked up to Kung Fu Tea on the corner, and got a Winter Melon Milk Green Bubble Tea.

Most of the island of Manhattan is laid out in an impenetrable grid, a veritable fistula of logical progression through space. It is so that people can zip on through from the top of the island to the bottom. But skip around to the southwest corner, and you can find the magical sprite zone of Greenwich Village – when streets go at angles, anything is possible.

An Italian immigrant named Domenico Parisi felt the super-magic of these angled streets and, also, really missed good espresso. He saved up money and bought Café Reggio on Macdougal, and then probably spent more 1920s dollars importing an espresso machine from Italy. Parisi made New Yorkers try cappuccinos for the first time. The café's popularity grew, and it was featured in a whole slew of movies – Harry met Sally there, so did the Godfather meet his Part II.

Today, Macdougal Street is an uncommon gathering of famous sites. There's the Comedy Cellar, which hosts greats like Jerry Seinfeld, Amy Schumer, Dave Chappelle. Right across the street, tour groups stop to gawk at the brownstone where Louisa May Alcott wrote "Little Women." Then they spin 180 to look at Reggio's façade. Sounds culturally intimidating, but the café's casual elegance makes it a local's hangout. But apparently they don't go inside to sit down at the marble tables, order a bowl of ice cream dribbled with hot espresso, and check out all the antique Italian art.

"Someone's always writing their screenplay there," my friend told me, and this is absolutely true. "Also there's a real Caravaggio there."

On the way back to Brooklyn, two very tall guys in Italian shirts sat across from me on the subway, one with a dark goatee, one with a blond man bun. The Q train was inching with agonizing slowness over the Manhattan Bridge. They had been talking about 'shares', and a bathtub in the center of an apartment they were renting/selling/owning/doing a vague business with. Man Bun took the opportunity of being outdoors to answer his phone

The Hudson River rolled out beneath us behind the dirty, scratched-up train windows, orange sunset dancing across the water. I had a box of takeout burritos on my lap. Where else could we be?