Seville: Spain's vibrant, ancient city is a great best place to get lost 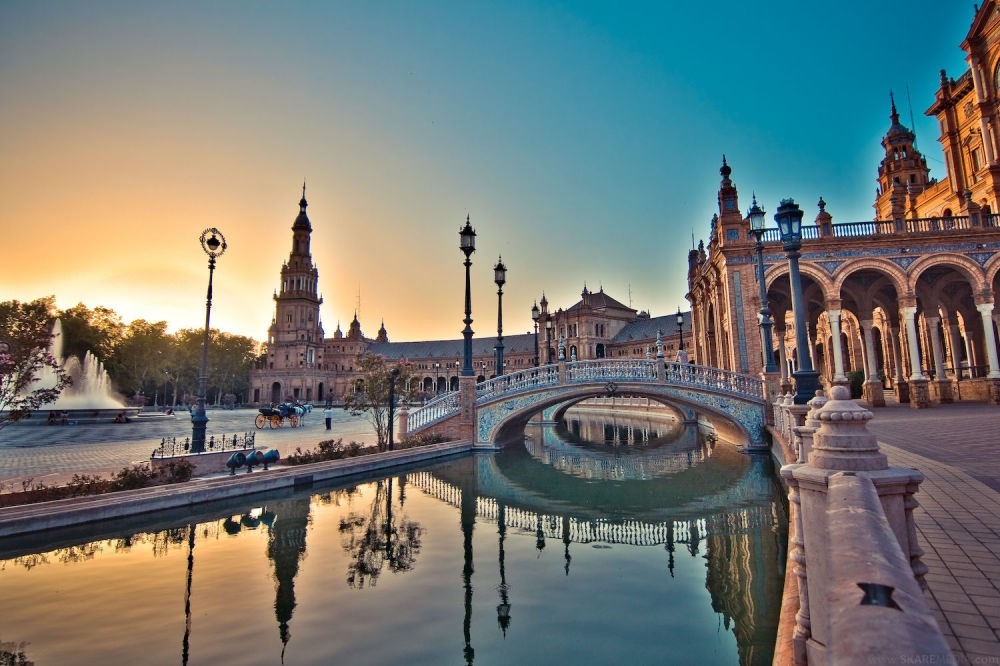 This winter pack your bags and travel to Seville, where you can find almost all Spanish archetypes and even the royal family

If you don't waste all your money going to Seville this winter then I don't think we can be friends anymore. Seville is just the greatest. What other city packs so many great stereotypical Spanish things into one place? Tapas? Flamenco? Bullfighting? Okay, maybe not bullfighting. That one is a bit morally gray, don't you think? I know Hemingway was all about the goofy manliness of the sport, but Hemingway liked a lot of crazy things, like the Florida Keys. Anyways.

Seville gets a lot of things right. It's a medieval city where Christian and Islamic influence met, like in the rest of Andalusia in southern Spain. Half the city still stands as stone buildings compressing a narrow labyrinth of streets and sand-colored buildings compressing a series of shady courtyards together. The Royal Family (did you know they still have a Royal Family?) lives here. As a present to some long-dead Spanish princess, some long-dead king imported thousands of orange trees, and in the winter, the streets fill with the glorious scent of ripening citrus. Also with the scent of oranges which have become overripe and have fallen to the ground and been trodden upon, and exploded. Do not eat these oranges. While pleasing to the nose, they are unbelievably bitter to the palate, and stain your cuticles pale yellow for a week. They also make your whole mouth go numb. I am sure this present was mostly about the flowers, not about the fruit.

Lucky pedestrians can spend entire days just getting utterly lost in the streets of Seville. Every once in awhile the streets will open up to allow a few restaurants to put tables outside, and crowds of chatty Spaniards will occupy them for hours over tapas. Oh, what are tapas? Like our Turkish meze, tapas are a zillion small plates served with drinks at every restaurant where you can while away the afternoon. The reason you should get on a plane and fly all the way to Spain for meze with different ingredients is because the Spanish consider tapas, one, to be free by right when accompanying a beverage, and two, the only proper thing to be doing all afternoon if you're not taking a three-hour nap. That's right: With the siesta and the tapas restaurant, Spain turned eating and sleeping into world-famous cultural events.

So, in this fascinating setting you've got the chance to do some world-class sightseeing. Here you can find the largest gothic cathedral in Europe, called rather predictably the Cathedral de Seville. 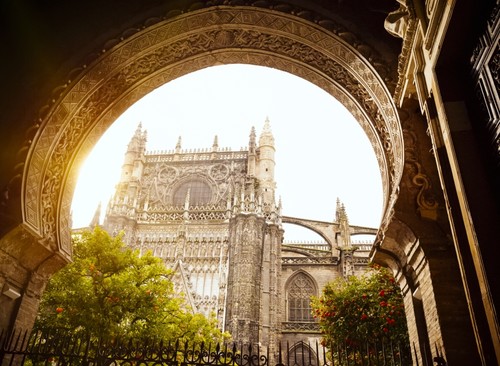 It used to be a mosque before La Reconquista, when the Spanish Monarchy expelled all the Muslims from Andalusia. The whole complex was destroyed in 1402. A tad later in the 15th century, they replaced the mosque with this grey fractal behemoth. When I first traveled to Seville, I actually had not known that such a cathedral was here, and I emerged into a crowded square by chance and gasped at it. Right next door is La Giralda - a huge minaret, the last remaining evidence that this used to be a Muslim place of worship. It has ramps instead of stairways all the way up, so that the city guards could ride their horses up and down. Presumably, this was when they weren't sleeping or eating.

Next on my list is the Alcazar of Seville. That royal family that I mentioned earlier has some pretty nice digs - a huge open-air masterpiece of columns, arches, and lush gardens. It was built by Moorish kings in the 10th century, and the Spanish kings thought it so nice that when they stole it, they moved in themselves. Fun fact: All of the country of Dorn from Game of Thrones was shot here in Seville, and much of it at the palace. They've got their own Basilica Cistern, too - a series of rainwater tanks called the Banos de Dona Maria de Padilla. Golden sunlight pours inside the crenelated walls and between the columns to illuminate the pools. 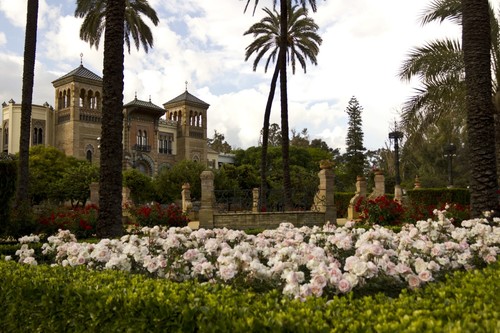 Just to the south is the Plaza de Espana, and though it looks as old as the rest of the old city, it was built in 1929 as part of an expedition. The architects came up with a half-hemisphere of stylistic pastiche, columns and tiles and towers and canals. It looks almost like a huge coliseum, a grand hall where visiting dignitaries can stand and see any point in the plaza inside. A huge fountain and a garden occupy the square in front of the complex, and a canal encircles it all. Best of all, they've got their own Venetian-style gondoliers. What is this alien place? It's the set for yet another movie. Both Lawrence of Arabia and Star Wars: Attack of the Clones had scenes filmed here. 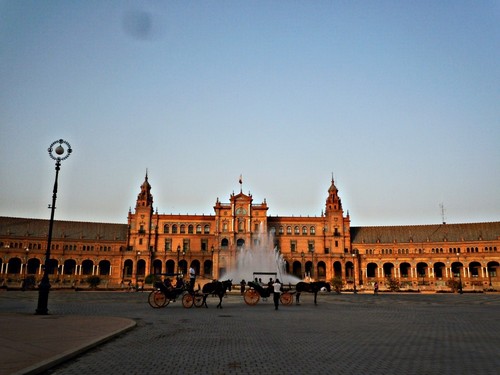 The architecture continues to get more modern elsewhere. A bit to the north, built in what used to be a hideous parking lot amid historical buildings, is a huge wooden waffle. The locals call it The Mushrooms, but the strange, rippling lattice of wood elevated a good two stories off the ground on sprouting columns looked to me like a floating waffle. (I insisted on calling it a waffle while trying to locate it a second time, and none of the locals had any idea what I was talking about.) This is the Metropol Parasol, the city's umbrella. It's the largest wooden structure in the world and is its own tiny universe. For a few euros you can take an elevator to the top and walk along a guide-railed path above the lattice. They've got a farmer's market, a restaurant, and an archaeological museum up there. How did they figure that out? Why did they put it all in a giant wooden waffle/mushroom/modern art piece? I sort of wonder if in another few centuries, other architects will copy Spain's avant garde buildings rather than its comely Moorish arches and painted tiles. At any rate, it's a bizarre sight that should be at the top of any traveler's list.

Decidedly in the middle of the list should be bullfighting at the Real Maestranza. They still actually do the whole weird bloodthirsty charade of matador, picador, and toro here, and have for hundreds of years. Bullfighting is actually illegal in other parts of Spain, but Seville has a long tradition to look after. It's a genuine coliseum, built in 1761 so that 14,000 howling spectators could watch a man in a cape stab a cow. It's strange to think that with all the eating and sleeping, a bit of spectated animal cruelty got added to the list of cultural achievements. I think you should go see it anyway.My last and favorite night in Seville was spent in the Barrio Santa Cruz, the old Jewish Quarter. It's all cobblestone and whitewashed houses with colorful doors and bright green orange trees, and you can hear soft conversation at every outdoor restaurant between local friends. My hostel owner had taken a group of us out to watch a genuine flamenco show at a place he knew, some underground venue lit by torchlight. This all sounds romanticized - and I assure you, I am romanticizing this as much as I can for maximum effect here - but I truly got a taste for the atmosphere of the city. Flamenco was born here, a unique confluence between Moorish music, gypsy melodies, and Spanish guitar.

The performance felt almost impromptu in the setting. People were hanging around, talking excitedly, when all of a sudden three people emerged from the corners of the room and made their way to the front. All conversation at the long wooden tables stopped, and the three people stepped onto the bare stage - two men dressed all in black, and a woman in a vibrant dress with a crazy draping skirt. One of them held a guitar and started to spin out a wild, frantic melody. If you've ever heard flamenco before, it starts with a long, mournful and musically dazzling intro - a guitarist gets to show off a bit. The second man began to sing, almost to howl, in a piercing melody.

The two men traded off phrases for a few minutes in long, unhurried explorations of melancholy, before the guitarist started to bring the rhythm to his strumming. This is what flamenco's famous for - the rhythmic slapping of the strings, and the participatory claps. The whole room started lightly tapping along to the beat, and the dancer began to stamp and spin around the stage. It was like casting a spell, like drawing everyone into a trance. The three components - singer, guitarist, and dancer - all working to conjure the spirit of the city. They made me miss Seville before I'd even left.