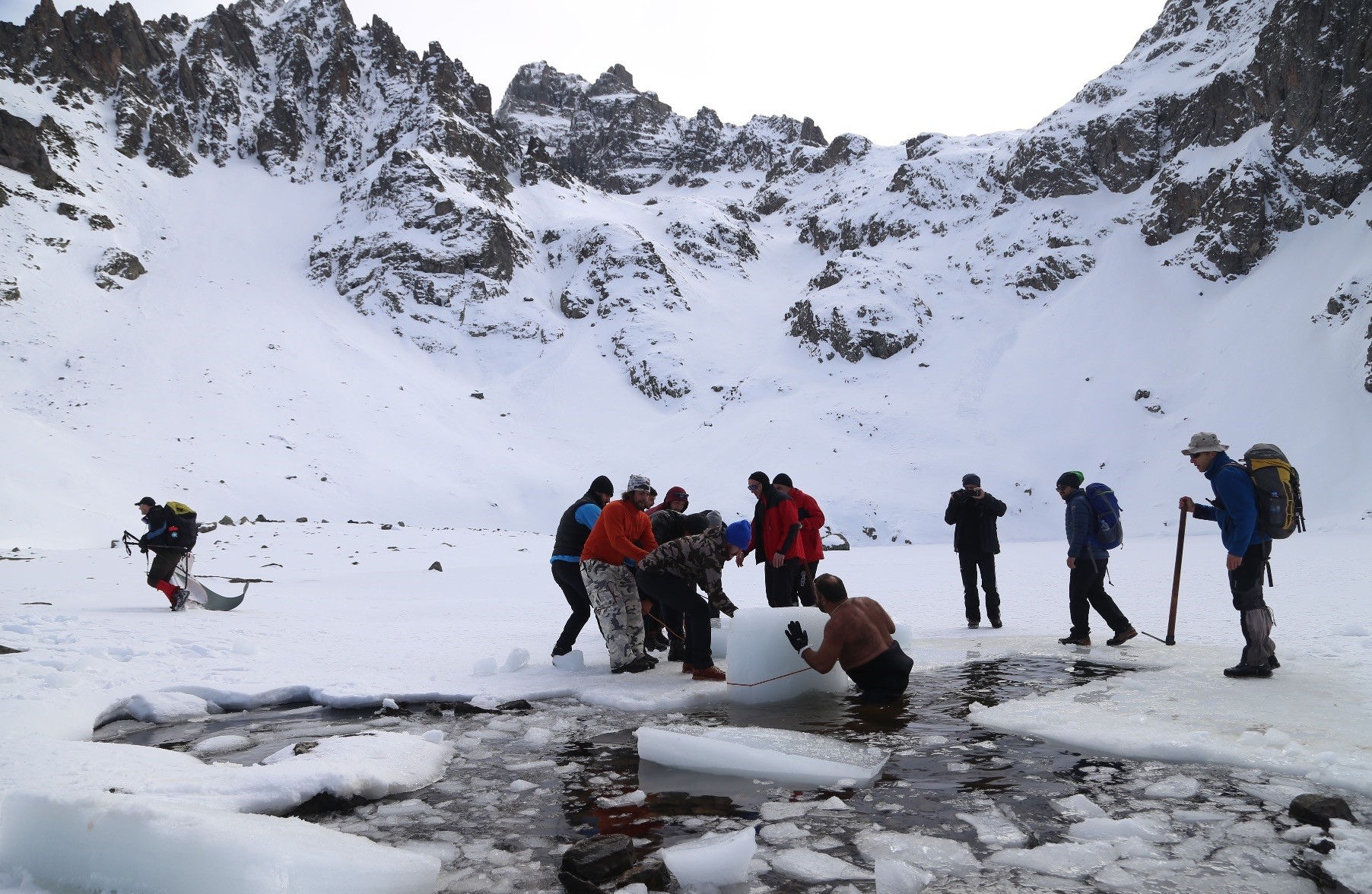 The Kalpli (Tobacelazena) Glacial Lake, located in the Kaçkar Mountains Natural Park in the Çamlıhemşin district of Rize province, hosted a swimming festival. The ice cover on the lake, which has an altitude of 2,850 meters (9,350 feet), could only be crushed by a power saw.

Organized under the leadership of Hasan Önder, a mountaineer from Rize, the Fourth Kaçkar Swimming Festival was held with the participation of Mehmet Kemal Arıcı, the provincial representative of Rize's roughly 300 alpinists and nature lovers.

Nature lovers gathered in the Avusor Highlands, making the one-and-a-half-hour trek to Kalpli Glacial Lake. The body of water was entirely covered in ice and trekkers had to use a power saw to break the top layer of ice, which was roughly 20 centimeters thick along the edge of the lack and 70 centimeters thick at a depth of 1 meter.

The trekkers successfully cut a swimming area of 6 square meters for evaluation before the power saw they were using broke down due to the difficulty in breaking the top layer of ice.

The provincial representative of alpinism, Mehmet Kemal Avcı, was among the first participants to swim in the water, which measured a temperature of 1-degree Celsius (34 degrees Fahrenheit). Despite the extreme frigid temperatures, Arıcı managed to stay in the lake for about one-and-a-half minutes.

An 11-person group of alpinists and nature lovers, consisting of Hasan Önder and his friends, covered themselves in snow before jumping into the lake. They were able to stay in the water for roughly one minute, and the 12 festival participants who successfully jumped into the water later warmed up by drinking hot tea.

One of the participants, Reşat Hacıahmetoğlu, said that he enjoyed the event in spite of the freezing water and frigid temperatures.

Zafer Koçal, the alpinist who tried to cut into the layers of ice with a power saw, said they were unable to penetrate the surface of the lake completely due to the 70-centimeter thickness of the ice, noting that the power saw was broken as a result of their attempts.