When a trip to Italy is planned, people tend to visit Rome, Venice and Naples, but it is always a good idea to find the underdog, a lesser-known city like Ravenna, which has hidden beauties all over the town

Last summer I flung myself on an ill-planned trip from Bosnia to Italy overland. My girlfriend and I mostly planned on seeing Sarajevo and Zagreb, and Italy was an afterthought. I know, I know, when is Italy ever an afterthought? But my friend was getting married in a town I'd never heard of before, and we'd tacked on a few days there at the end of the trip. I figured it would be a lot of pasta. (Spoiler alert: It was.) What I did not realize was that Ravenna is a thing. We walked from the train station through palm-lined streets toward the old part of town, until the road led us to a massive open gate, the Porta Adriana. The cobblestone road led us to medieval houses and to crenellated towers. I was blown away by Ravenna's ancient architecture, its charming public squares, and friendly locals on yellow bikes. And, most surprisingly of all, I found out it shares a special connection to Istanbul - Ravenna is the city which feels the most like old Byzantium. It too used to be a capitol of the Byzantine Empire.

Ravenna used to be a capitol of three different kingdoms, actually, the Western Roman Empire after Rome fell to Goths - the Germanic ones, not the emo ones - and then those same Goths liked it so much after sacking it they picked it for their capitol. And after they got kicked out, the Byzantines chose it as their western capitol. It didn't get to be a flagship city for any of these kingdoms for a very long time, per se, but during its brief centuries in the spotlight, leaders invested in the art and architecture of the town. But honestly, as empires slowly forgot about the place, it made it a bit easier for the locals to protect their treasures. 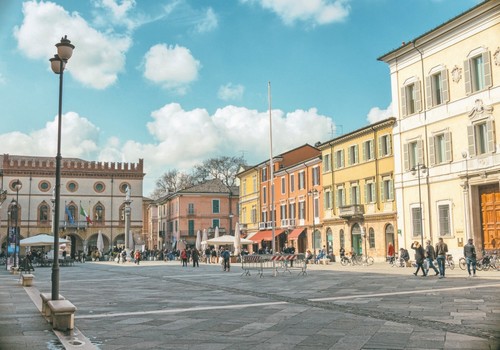 Ravenna's biggest claim to fame is its mosaics. Among its eight UNESCO World Heritage sights of early Christian art and architecture, it has a plethora of top-quality mosaics hidden away in its churches and mausoleums. Ravenna has the best-preserved Byzantine mosaics you'll find outside of the Hagia Sophia and Chora Church in Istanbul. In fact, Ravenna's Basicila di San Vitale was built just 10 years before the Hagia Sophia in Istanbul, and it's hard not to imagine that Roman architects took one as a model for the other.

When you're outside the building, the similarity is striking - a bunch of rounded walls, chunks and corners sticking out, a strange pile of bricks holding up a windowed steeple. Inside, portraits in mosaic run up and down the sides of the arches. You can find a series of imperial selfies: Justinian and his closest advisors, or the Empress Theodora and her entourage, or any number of saints. (Who held the mosaic-camera??) Wall panels and nooks portray scenes from the bible, angels and cherubs and wild animals all fragmented across the surface. Imagine how much time it must have taken for scads of trained artisans to get all these shiny tiles and insert them just right, 5 or 6 meters on scaffolding above the ground. It's stunning.

And that's not even the best place for mosaics in Ravenna, not even close. Around the corner is the Mausoleum of Galla Placidia. The ceiling's mosaic resembles a Christian "Starry Night," with gold stars on a deep blue background, save for a huge gold cross in the middle. Inside there are images of early Christian themes and stories combining with Greek and other Hellenic influences. The whole place shimmers, making the 1,400-year-old space seem alive. 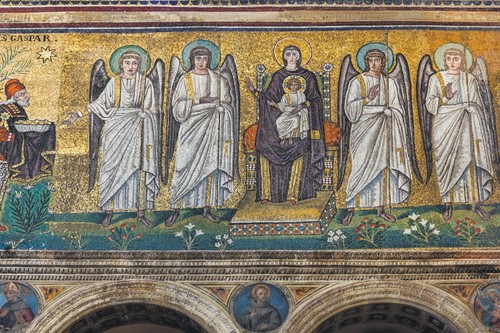 Mosaics at Basilica of Sant'Apollinare Nuovo

After immersing yourself in the spectral mosaic ocean, you should take a stroll to see some of the town's other medieval sights. My favorite was the Torre Civica, or the Civic Tower. Much like Trump Tower, or I suppose any other modern skyscraper, it was built by local businessmen eager to show off their wealth and prestige. Thank god for the hubris of powerful people who have lots of money and good taste. In the 13th century most of Italy's towers came down because the Pope wanted to throw his weight around. The Torre Civica survived the tower purge - it had become too useful. They used it as a fire watchtower, as a gathering point in case of emergency. Much like the other more famous tower in Pisa, this tower lists to the right as well, for exactly the same reason - perpetual slow underground mudslide. Ravenna however is a bit off the tourist trail, since it's in a no-man's-land between Venice, Florence, and Bolonga. Nobody's swarming around the Torre Civica trying to take that tricky-perspective shot where it looks like you're holding a very tiny leaning tower. This stone tower isn't really in an open field - it rises above terra-cotta roofs and yellow-orange plaster walls of the buildings hemming it in, and makes the city feel both cozier and older.

The city's full of quirks, too. Dante Alighieri, Italy's most celebrated poet, died in Ravenna. He'd used the old poet's trick of "changing everyone's names" to write some political satires, and the people whose names he'd changed were neither fooled nor took it well. So he was exiled to Ravenna on the coast, where he spent the rest of his days. After several hundred years, things had cooled down, and Dante's work had become the defining work of Italian poetry. The Florentine dialect had become Italian as we know it almost solely due to Dante. So the Florentines were keen on getting their poet-laureate bones' back. "Nope," said the Franciscan monks who ran the Basilica di San Francisco where he'd been interred. Pope Leo X ordered the bones be returned. "Sure thing boss," the monks said, hiding the bones. They sent an empty coffin to Florence. Dante's bones weren't found until the 1800s when they were doing some restoration work, and they found them in the walls. Presumably with a note saying "yo, here are Dante's bones, if found, tell the Florentines to take a hike." It's a tale of unbelievable petty monks, and it made me smile. You can still see Dante's bones in the basement of the Basilica di San Francisco. Just like the Basilica Cistern in Istanbul, this place occasionally gets a few inches of water - though that wasn't really intentional here. Perhaps you should read a few of your own rhymes to the bard's body in homage. 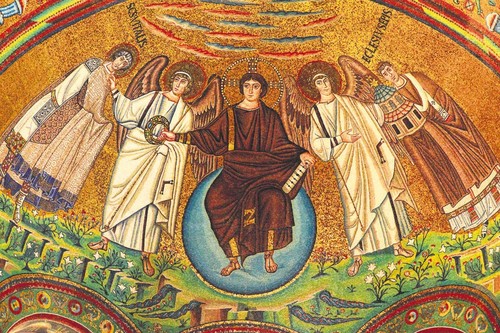 Mosaics at the Basilica of San Vitale

Another delightful bit of Ravenna lore is the Sweaty Madonna. No, it's not the rejected title to a Beatles tune, it's an icon lodged in the transept of a ridiculously lavish church. As everywhere else in Italy, you trip over medieval art and architecture without particularly meaning to. The Duomo, or Cattedrale Metropolitana della Risurrezione di Nostro Signore Gesu Cristo, has about as many treasures as its lengthy title would suggest. A quick survey: There's a mosaic of Bishop Ursus done in the Byzantine style. There's a 2-meter-tall marble pulpit, taken from a quarry in the Sea of Marmara, (there's that Constantinople connection again) decorated by 36 carved panels of different animals.

There's a pair of old Roman stone tombs, one of which was repurposed to hold the remains of Blessed Rinaldo da Concorezzo, who died in the 1300s. But in a gold-lined chapel in the church, you can see La Madonna del Sudore - the Sweaty Madonna, an otherwise minor icon surrounded by famous art. The story goes a drunken gambling soldier slashed at the icon in a rage, after losing all his money, and the icon bled. I checked a few sources - nobody seems to have a story of the icon sweating, so I remain totally baffled. Perhaps when you visit Ravenna you can shine a heat lamp on it or something. Though the Arts Directorate probably wouldn't be too happy about that, no?

But that's what I enjoy most about Italy. No, not magic sweaty religious symbols, but that ability to blunder along into some lesser-known town and find fabulous art and architecture by chance. Turkey has that quality, too. Any country that aspires to the heights of spiritual life, or aesthetic appearance, or even base commerce, tends to leave a lot of beautiful evidence behind. And chance, more or less, is what made a lot of the most famous touristy things, well, famous - the leaning tower of Pisa only started leaning because of unlucky geology. So why not take a chance on a city you haven't heard so much about?