Hasankeyf: A dreamland of southern Turkey 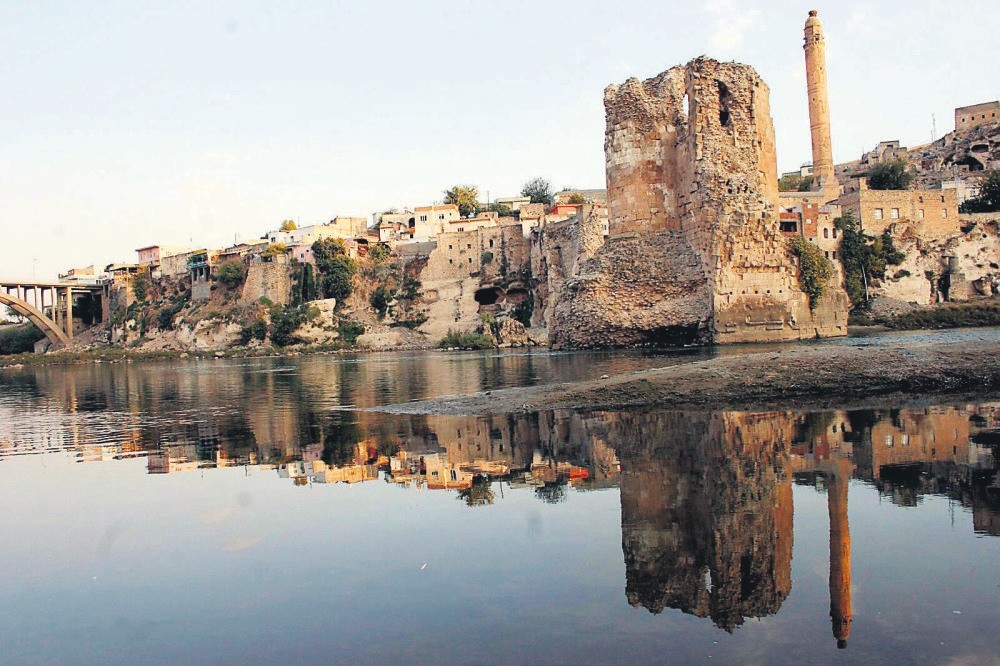 The ancient and magical city of Hasankeyf personifies every Anatolian civilization that has come and gone, but soon, the city will be flooded by the Ilısu Dam, but until then, Hasankeyf stands tall as an ancient relic and a reminder of living history

Hasankeyf is a 10,000-year-old settlement on the Tigris River in southeast Turkey, a place of central importance as a Silk Road stop. It's full of remnants from every conceivable period of human civilization, from Neolithic to Roman to Mongol to Ottoman.

It's a gorgeous wrap of canyons, a crumbling bridge, a tiled tomb, and splendid caves. At some indeterminate point within the next few years the Ilisu Dam will be finished and the town will be flooded, and its thousand-year-old stone minarets and thousands of cave houses swirling up the slopes of the canyons will be collapsed, and everything will be sealed underwater for the next hundred years.

"The mood in the town is pretty grim these days," admits John Crofoot, an American national who has been living in Hasankeyf for several years and the co-founder of an organization to draw attention to the town. "But local residents still really appreciate visitors and the chance for conversation." 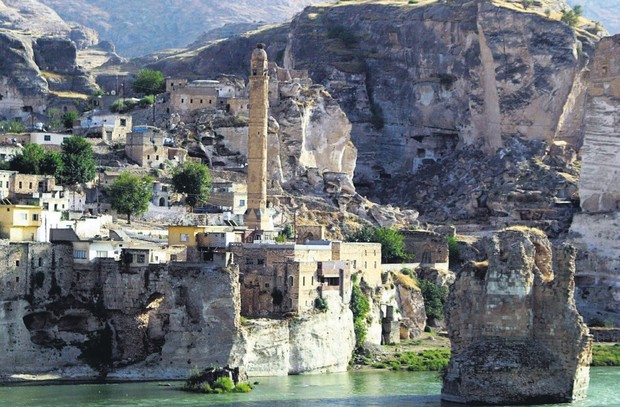 Nobody knows when exactly the town will be flooded. The dam's construction has been delayed for all sorts of reasons over the years, but the latest good news is that tourists will definitely be able to visit through Ramadan 2018. That means you have less than a year to see it. I highly, highly recommend you do so. Not just because of the relics from dynasties past - though those in themselves are an excellent reason for some sightseeing - but because the town has a sense of community often hard to find in the modern world.

This patch of cliffside land in the Fertile Crescent has been hot real estate for most of recorded history. The first settlers came here likely before agriculture was invented and either found caves to live in or created their own. Early Anatolian people recognized the defensive potential of the site and set about building fortifications. The original name was Assyrian, Castrum Kefa, "The Castle of the Rock," and it was most likely a large walled city by the river, though little remains from those times.

Romans, on their way to Palmyra, built a citadel here in the fourth century B.C. and the place was used as an outpost on their eastern border with Persia. The Arabs conquered the place in the sixth century B.C. and changed its name into their own language, Hisn Kayfa, which clearly stuck. A succession of Central Asian tribes later took over - the Artuqids, the Ayyubids and the Aqqoyunlu. 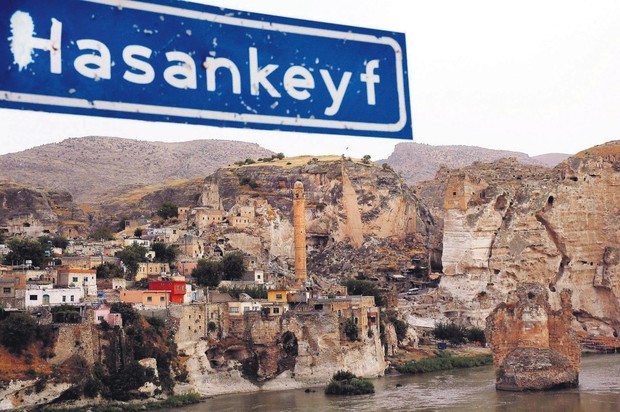 Each group of people left something here to mark their power and influence, whether it was a mosque, graveyard or of course, a castle. The result is a crazy scramble of styles and cultures. The locals even speak a patchwork language of Arabic, Kurdish and Turkish. The community has absorbed a different flavor from every population who has ever visited, and as a result, they have some of the best instincts for hospitality in the whole of the Middle East.

My brother and I visited in the winter of 2015. We were on a longer trip through the southeast, through Mardin and Urfa, and had heard about the town from some friends, so we hitchhiked to see it. The road wound down from a nearby mountain pass, and we could see the whole valley lit up with the sun perched low in the sky. Shadows collected in the folds of the hills rising up on the horizon. The Tigris River, a broad unreflecting ribbon of grey, unrolled along the valley floor. Smoke from coal stoves hovered in the air. The town looked as if it had been chiseled out, rather than built up, from the sandy brown stone.

We wandered through a teetering bazaar of bakkals (small grocery shops) and cafes draped with fairy lights. We offered a local shopkeeper TL 80 ($21) to sleep in his attic and he was happy to have us as guests. You could probably do this more ramshackle style of travel as well, but if you are more keen on doing things right, you can fly to nearby Batman, take a bus and then stay in the Hasankeyf Hasbahçe - a guesthouse with a restaurant and huge patio overlooking the river.

We explored the town in the sunset light. Up through the Seljuk bazaar is the El Rizk Mosque, built in the 1400s by a clan of Ayyubid Kurds. The slim profile of its stone minaret looms over the town, and it is easy to imagine how the muezzin could ascend the stairs and call out over the whole valley. Behind the mosque is my favorite part of town - a series of overlapping ruins, stairs, caves and towers up to the top of the cliffs.

Up on the crisscrossing pathways we could get a view of the best sights in town. The Kızlar Mosque's minaret, also an Ayyubid original, is visible at the opposite side of town against the backdrop of the hills. Two massive bridge pilings rise from the river, constructed a thousand years ago by a Turkmen Artuqid dynasty. The onion-shaped Zeynel Bey Mausoleum stands across the river. The tomb, made for a Mongol prince slain in battle, demonstrates an aesthetic link between the designs of Central Asia and those of Anatolia, with a beautiful turquoise dome and crosshatched tile mosaics up the side. And the cliffside on the other side of the river looked pockmarked - full of ancient caves carved into the rock.

My brother and I descended the cliffs and went into the canyons behind the town to admire the archaeological digs and the citadel. The citadel was also built by the Turkmen Artuqids, and it is a fun place to poke around. We met a teenager there in the canyons, digging in the dried-up river basin for silver and other precious metals, usually illegal without a permit. He told us a bit of a strange story about how he made friends with a policeman by giving him a sheep. He had also defended the policeman's kid from a gang of bullies, fighting them in a desperate street brawl. The policeman was so grateful that the teenager had saved his kid, he wrote him up a mining permit so he could dig whenever he liked. When asked if he was trying to get some extra money for his family - Hasankeyf is a very poor town - he shrugged and said, "Nahh, I just really like digging around for stuff."

That night, my brother and I heard impossibly loud music echoing throughout the valley. We followed the sounds through the low stone alleys until we found the source - a wedding party dancing in a circle. About 200 people were there, and a quarter of them were on their feet. The rest of them sat along the walls, in gardens, on balconies or in chairs they had set up in the streets. Two musicians headed the throng, a singer and a keyboard player with a drum machine. When the wedding party saw us, they immediately drew us in and insisted we dance with everyone, including the mother of the bride, father of the groom, and an endless procession of kids and grandpas. It was a delirious riot.

We made friends with the brother of the groom. In a lull between songs, though a "lull" in this case lasted about a minute and a half, he took us away from the action and into a tea house. He greeted the patrons and owner by name and made for a table in the back with a lace drape. He explained that this was merely only one of three weddings tonight, and everyone was moving in between them. He ordered me and my brother some tea, and then taught us a card game called Basra, which involved a slimmer deck and adding up to 11. We played until we could hardly keep our eyes open, and then our new friend walked us home. 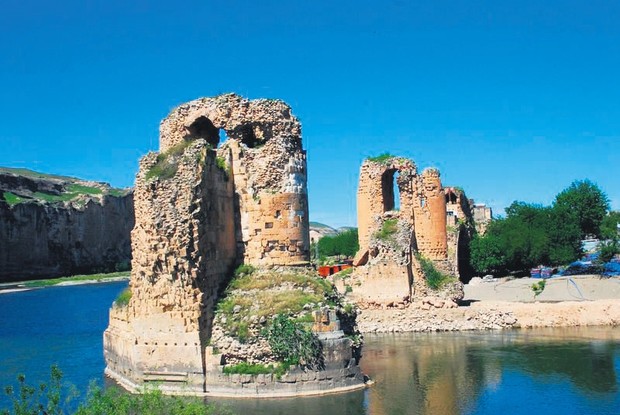 In the morning the brother of the groom and his buddy came by unannounced to give us a walking tour of the entire valley. We wandered up on the cliffs, through caves, clambering up grass-covered slopes and around the huge rocks popping out of the slopes like mushrooms. They led us along the banks of the Tigris, just underneath a cliff, and we got our shoes sopping wet when we stepped in deceptive unsolid patches of marsh grass. When we saw other locals out on our walkabout, either shepherding their herds or out for a stroll themselves, they greeted us and each other in that strange trilingual way.

After our tour, we were starving. No worries our hosts told us, as there were the three feasts for the three weddings to attend. We ate boiled sheep, pilav (rice), tulumba (a type of dessert) and piles of çoban salatası (a kind of mixed salad) in a series of courtyards around town. The locals waved at each other as they passed. Are you going to the next one? Make sure to try the tulumba there, it is the best. The entire town felt like a garden party in slow motion.

Things have changed in the past few years. The Zeynel Bey Mausoleum has been moved, with great architectural care, into the new Hasankeyf Culture Park above the water line. Construction firms have begun collapsing some of the caves for safety's sake. The Housing Development Administration of Turkey (TOKİ) is constructing new apartment buildings on the far shore, and the locals know that at some point they will have to move up the slope.

"Yes, they are making preparations to remove certain architectural elements from the lower city, and they are doing foundation work for the walls that will shield the cliffs of the citadel from the water. This work is unsightly and depressing," Crofoot tells me. "But there is still much of Hasankeyf that is undisturbed, especially the lower city and hinterlands, and a visitor can still get a sense of the medieval urban landscape by wandering through the gardens and taking in the view from the hill."