Jazz up your holiday with a camping adventure in Ölüdeniz 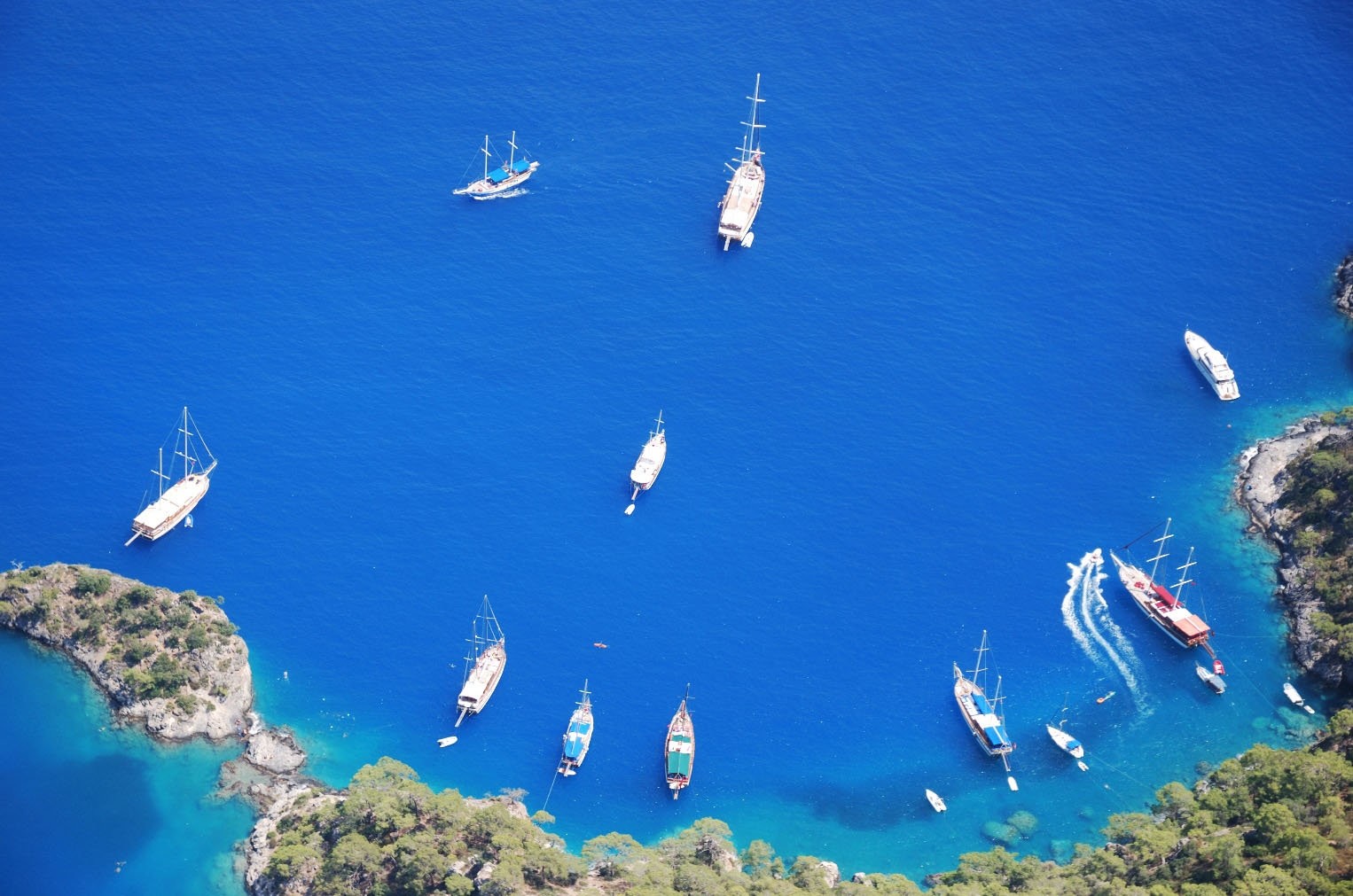 As spring is nigh and after traveling the ‘conventional way' for some time, you might want to try something different, camping, perhaps, at Ölüdeniz, the popular beach resort in Fethiye, a district of Turkey's southwestern Muğla province. But if you are a first-time camper, you can learn from others' mistakes - which I like to think of as a memorable adventure

It was past midnight and still stinking hot - very typical June weather in southwest Muğla province. After spending the evening in port city Marmaris, we remembered we had to find a campsite for the night. This was the first time we would be camping.

We hardly ever make plans when taking off on a trip and, even at the times we do plan, nothing really goes as planned. So, although we have a brief idea of the direction we will be headed in, we decide on the route as we go along. Hence, although we had been traveling for some time now, we were pure amateurs at camping, my husband and I.

I found a campsite in the area online and called. The person running the site informed me that the latest admission time is 12:00 a.m. midnight to prevent other campers from being disturbed while the newcomers settle in. 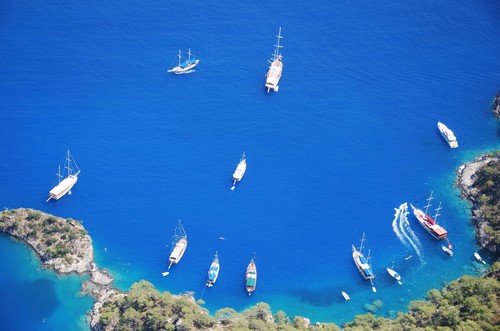 Fair enough, we thought and after a little thinking, we decided to up and leave for Muğla city center as it was only about 55 kilometers away. After checking in on a couple of places and unable to find a vacant spot to camp, we looked on Google Maps to choose where we wanted to see. Our next destination, sleepy, tired and hungry, would be Ölüdeniz in Fethiye - meaning we would be driving roughly another hour. It hardly ever turns out as we think. Although pretty empty, the constantly winding roads prevented speed and forced caution. After two hours on the road we had finally arrived to Fethiye. We were determined, we would be camping that night. It was almost 2:00 a.m. and we were still looking for a place to camp. How clueless we were. I still cannot believe we did no research or reading on camping before we left home for the trip.

I started to uncontrollably clap my hands upon seeing a road sign that read "Doğa Kamp" (nature camp). We were relieved. I just wanted to stretch out my legs and sleep until I could sleep no more. But there was a problem: We could not find the entry point. So, we drove up and down a little more and failed again to find its entry, we stopped by a nearby petrol station and asked the man there - Tip: Petrol station staff in Turkey are often one of the most frequented stops for road directions and they are usually quite helpful - and he told us to look out for an inward entry right next to the sign. 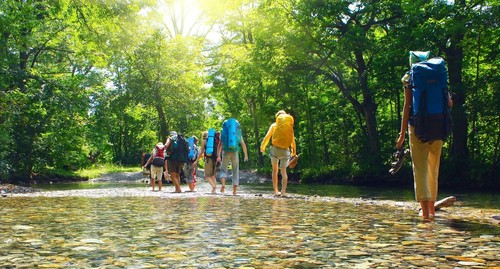 He was right. The entry was a path that led us to a rocky terrain on the edge of a cliff - not that we could see much. It was pitch black. There was no lighting at all. A little into the path, I saw a sign that read: "Doğa Kamp 3 km." Awesome, we would start getting some shuteye anytime now. What was that noise? A wild hound? More than one? We first heard them, then, we saw them thanks to our headlights. I had never seen wild hounds in my life before, but had heard there were plenty of them in Fethiye. Still, it wasn't something I had expected to see. It was a one-way road, so there was no going back, especially since we could not see anything. As we progressed, we came across an old sign that read "Macera Kampı" (adventure camp) and another with a telephone number, cautioning that there is room to fit one vehicle only in the upcoming trail and that those planning to go further should call the number provided so that vehicles coming from the opposite direction will be kept waiting until the newcomer reaches the site. Obviously, we did not make the call and continued along the bumpy and narrow path to the top of the mountain. That was the longest and most adventurous 3-kilometer drive in my life. The 30 minutes it took us to reach the campsite felt more like three hours.

We had trouble finding room to park the car so we left it at the entrance. It was about 3:00 a.m. - it wasn't like anyone would be moving their vehicle at that time. 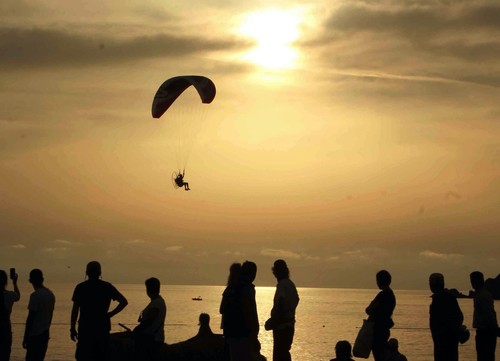 Hoping to find someone, anyone awake, we got lucky at last. A tall, lanky man with mid-length ragged hair walked out of the darkness. Yes, he was our savior, Vahap, the owner of Doğa Kamp. After a brief chitchat about prices, rules, he asked if we knew how to set up a tent. "Yes," replied my better half. I looked at Serdal with questioning eyes. We hadn't even removed the tent from its packing, let alone know how to set it up. But, he is the kind of man who always believes he can do anything if he tries. So, I followed in silence as we walked toward an empty space, big enough to set up our tent. All the tent platforms were full, so we had to make do with the rough ground.

"There was another group of campers today who told me they knew how to set up a tent and after struggling for a couple of hours, they asked to hire one of my ready tents. Just in case you have trouble, let me know," said Vahap with a smirk and walked away. He could see right through us; our wondering eyes made it obvious that we were novices to camping. 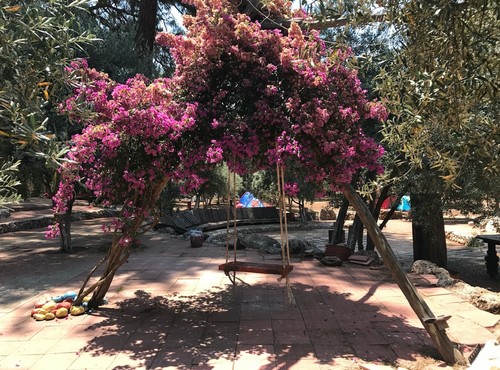 A serene spot at Doğa Kamp for some personal time.

There was a single lightbulb dangling down in our chosen area, less than 20 meters from the makeshift bathrooms. I thought, "Great, I've been hanging to go for hours." After we carried all our camping equipment to our humble camp spot, I grabbed the toilet paper I always have with me on trips and bolted to the bathroom. The door creaked as I closed it. It was most likely Vahap's own handiwork, wooden bathroom cabins, two in the front and two in the back. There were gaps between the pieces of wood hammered together, but I was too tired to think about anything. I was just about to set myself free - sorry - that I saw a baby scorpion on the ground. The only thing my mind processed at that moment was that I couldn't scream, because it was extremely late and people were sleeping. So, without giving it any thought, I jumped on it. I was scared, yet I felt sorry about what I did. It was over, but I was still uneasy, because I was wondering from where else other creepy crawlies may emerge. I eventually answered nature's call and got out of there as soon as I could.

It was time to set up the tent. We opened the packing for the first time. Took out all the parts one by one and grouped them. My handyman, Serdal, first tried to make sense of the parts then attempted to put them together with the very little light we had. It flopped. He couldn't get it upright. I love him dearly, I do, but we always have something we don't like about our partners, right? Well, this one tackles everything without looking at the instructions and takes pride in putting it together, in hours - instead of minutes, had he checked the instructions. 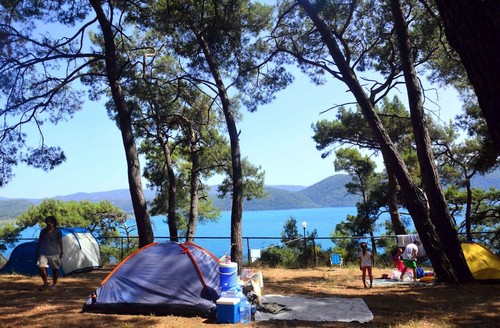 I looked at the time and it was almost 5:00 a.m. Someone had to take control. Looking over the sheet with my smartphone's flashlight app, I saw what was needed to keep the tent up. I guided Serdal and once he tied the knots that were necessary, our tent was finally up. We did not have a mat for the tent but we bought an inflatable bed. Deflated, we positioned the bed inside the tent and with the aid of a hand pump, it was inflated and ready for snooze time. By the time my head hit the pillow I was knocked out.

I woke up at 8:00 a.m. Finally, daylight. Then, I noticed that my pajamas were soaked. I poked my head out of tent and the suffocating humid heat hit my face. Typical Mediterranean weather in the middle of summer. I noticed that being so close to the bathrooms was not a such a good thing after all. People were trailing back and forth to wash up and meet their needs. This was, perhaps, the busiest area at the camp site. Serdal was still sound asleep. Birds were singing like I never heard before. I turned my head in the direction of the galloping sound only to see Vahap riding a horse - another sight I had not expected. I went to the car to grab a fresh set of clothes, my towel and hit the showers. I saw that nobody had removed the body of the crime I had committed the night before. It was quite clear that hygiene is not a priority here. It was now more obvious in broad daylight. I washed up the area before showering. Clean, dried up, fresh and ready, I went to wake up Serdal for breakfast. Within the minute it took me to get to the tent, I had already worked up a sweat without any effort.

Walking through the woods to the breakfast area near the entrance, I was enchanted by the natural beauty of the site, covered in trees, with wild flowers dotting the area, a great playground for children. Who would have thought - especially after such an eventful night?

Breakfast was nothing but ordinary, nonetheless, it was enough.

I later learned that the campsite used to be an adventure park. Was I surprised? Not at all. When the time came to leave Doğa Kamp for our next adventure, driving toward the exit, we saw other campers loaded with their backpacks hiking to the site. When we reached a spot where we could finally see through the trees, I was enchanted by the view of Ölüdeniz, a small village that is one of the most popular beach resorts on the turquoise coast of southwestern Turkey. We stopped the car for a brief moment to take photos and embrace one of the most beautiful views I had ever seen. It took me moments to realize that we were, indeed, on the edge of a cliff and one wrong move would and we would tumble down. We were aware of this while going to the campsite at night, but being aware of something and having knowledge of it through actually seeing it are two different things.

Despite the lack of hygiene - you are in nature, so don't expect much - we were satisfied and will come back again, this time knowing what to expect and to make the most of our time at the campsite.

After a brief tour of Doğa Kamp, I saw that tents are not the only option. There are bungalows and mountain huts at TL 80 ($20) per night, with breakfast included. There are tents that are ready to use at TL 60, but you also have the option of setting up your own tent at TL 40. One other accommodation option available is the tree house at TL 70. Breakfast is optional at TL 15, but do not expect much. All the prices stated are per person.

Check out the Doğa Kamp website for more information and to make a reservation: