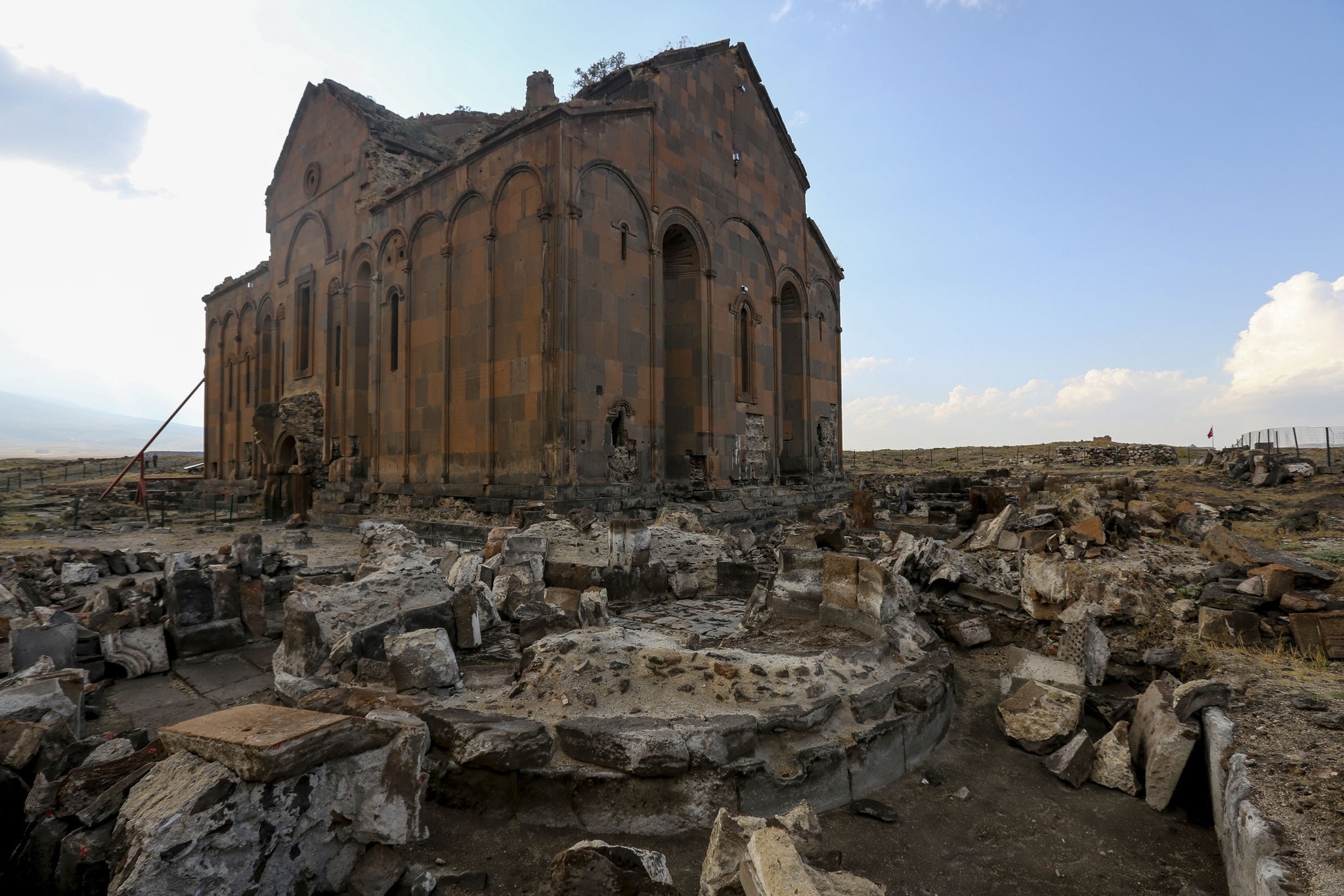 Ani has been home to some 23 civilizations since its establishment and it is also considered to be the first entrance gate to Anatolia from the Caucasus.
by Anadolu Agency Mar 14, 2018 12:00 am

Regarded as a cradle of civilizations that has seen many dynasties throughout the centuries, the Ani archaeological site is growing in popularity with local and foreign tourists, especially after it was added to UNESCO's World Heritage List

Registered on the UNESCO World Heritage List, the Ani archaeological site, also known as the "World City," "Cradle of Civilizations," "Binbir Church" and "40-Ported City," has been attracting tourists across the seasons.

Located on the Turkish-Armenian border close to Arpaçay district in Kars province, Ani was once used as a capital by Armenian rulers in the Bagratuni dynasty between 961 and 1045 B.C. The ancient city, which houses Islamic architectural works of the 11th and 12th centuries, was added to the World Heritage List on July 15, 2016.

In fact, Ani has hosted some 23 civilizations since its establishment and it is also considered to be the first entrance gate to Anatolia from the Caucasus.

Kars Museum Director Necmettin Alp told Anadolu Agency (AA) that Ani is one of the biggest archaeological sites in the eastern Anatolian region and interest increased after it was registered by UNESCO.

"Intensive works have been conducted to protect architectural constructions and immovable cultural values, and to transfer them to the next generations. A complex comprising of a reception center, car park and other equipment has been built," the museum director said.

The efforts of Kars Gov. Rahmi Doğan have led to a flood of tourists to the region, Alp continued.

"There has been a serious increase in the number of visitors. At the end of 2017, our annual visitor number was 41,685. In the first two months of 2018, 24,950 people visited. That is, there is an increase at the rate of 70 or 80 percent," he said. "The city has authentic beauty throughout all of the seasons. When Ani's architectural and archaeological features combine with the geography, there is a unique beauty. I highly recommend people to see this beauty."

The whole world should see it

Lale Hamleci, who came from London, said that she traveled with the Doğu Express to see the ancient site.

"I recommend that everyone come here. I saw Ani on the news and I was very curious. I didn't know what to expect but I decided to go," Hamleci said. "It was a huge surprise when I went. It was much more perfect, much more beautiful than I expected it to be. I will go again with friends. If you haven't seen Ani, you haven't seen the world. I saw the world."

Stephen Hargrave, a British citizen, said that he was mesmerized by Ani, but he didn't even know about it a few weeks ago.

"One of my friends advised traveling with the Doğu Express. I came here from Ankara with it. I discovered Kars and Ani, and it was a great experience for me. When I return to London, I will tell everyone that they should see this beauty," Hargrave said. Another visitor Pelin Şen, who came from Istanbul, noted that Ani is much more beautiful than the pictures they saw on social media. "There are many places that should be seen in Turkey, and Ani is one of them," she said.