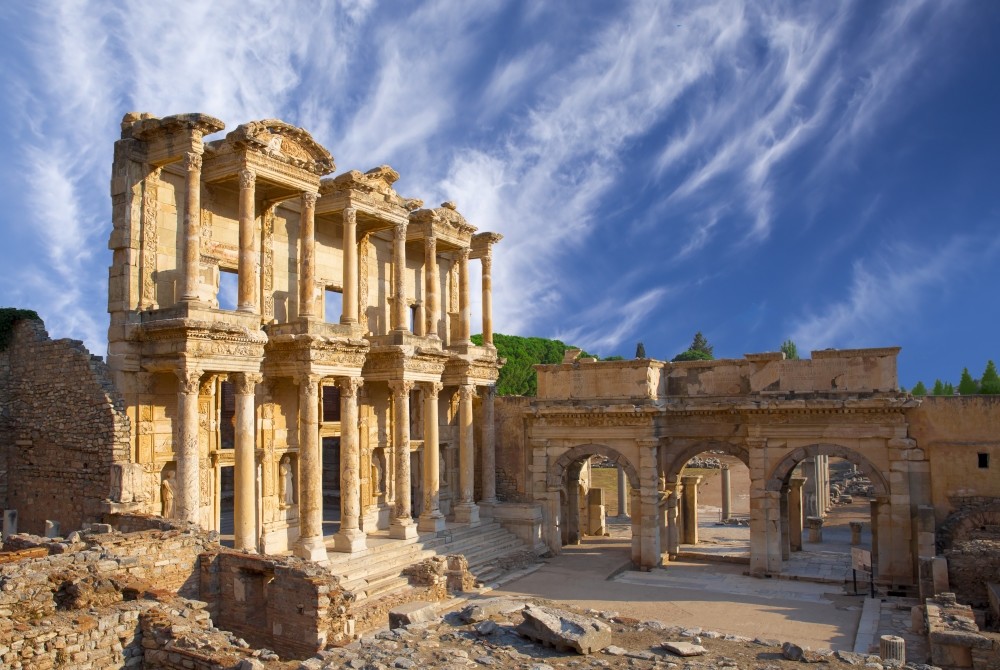 Once a busy port city on the Aegean coast, Ephesus is now teaming with tourists who come to Turkey to see the ruins of the legendary ancient Greek city and one of the first tourist attractions in the modern sense

When it was built in the 10th century B.C., Ephesus was one of the 12 cities of the Ionian League. It was a center for trade as well as education and the ancient Greek city, which is located on the present-day coast of Turkey's İzmir province, thrived under the rule of the Roman Empire until it was buried in the dust.

The city remained a jewel of history until archaeological studies began in 1863. However, since the archaeological excavations were mainly funded by countries such as Austria, the U.K. and Germany, some of the findings were shipped to the countries of the investigators. Yet, one thing remained where it should be: The structures of the great ancient Greek city.

Ephesus, which is on United Nations Educational, Scientific and Cultural Organizations (UNESCO) World Heritage List and visited by a million visitors on average, has been bringing local and foreign tourists in the region for 100 years.

International visits to the ancient city of Ephesus, which dates back to the Neolithic period (6,000 B.C.) and was the capital of the Asia state of the Roman Empire, started very early but it was the 1920s that they became regular.

The Ayasuluk station which started to serve in 1867 on İzmir-Aydın railway, which is the first railway line in Anatolia, revived today's Selçuk district where no residents were left in those times.

The number of tourists visiting the district increased as the transportation to the ancient city of Ephesus, where foreign researchers continued to work at that period, became easier with the opening of the station.

According to the information in the archives of the district, the social and economic life of the county revived with the regular visits in 1920. George Karpouza, a resident of the district, opened the first known hotel of the province in 1873 with the opportunity of increasing number of tourists in Selçuk.

Tours with horse-drawn vehicles to the ancient city of Ephesus also started to serve for the tourists coming to the station in this period.

Speaking to Anadolu Agency (AA), Ephesus Museum Director Cengiz Topal said that the ancient city went through the brightest era between the 3rd and 5th centuries B.C. He said that it had a great role in the introduction of Christianity with its model architecture along with being a port city and an administrative center.

Topal also noted that the first excavations in Ephesus, which once had a sprawling population that reached up to 200,000, started in the 1860s in the time of English railway engineer John Turtle Wood.

He added that the excavations were completed after some 30 years with the initiation of the Austria Archaeological Institute.

"With Woods's works, excavations started here. He was very important in the revealing of this ancient city," the museum director said.

One of the first tourists spots in the world

Topal explained that the mention of Ephesus and its people in the Bible increases the interest of tourists in the city and that regular tours have been organized for 100 years.

"Ephesus is one of the tourism centers in Turkey and even the world. We know that tours were organized here in the 1920s. According to the information that was received from the residents of the district and the archives, it is revealed that tourists coming to the station by railway came to this region by means of horse-drawn vehicles. We have fixed a million visitors every year. We foresee to complete the year with around a million visitors," he said.

Ephesus from perspective of tourists

A Bosnian couple who live in Germany, Niyaz and Turkana Vuksanovic, said that they saw Ephesus on TV and in photographs and they decided to see it in person.

Meanwhile, a 28-year-old Indian native, Akshay Kolvalkar, shared his experiences about when he visited Istanbul, Cappadocia and Ephesus on a nine-day tour.

"I have seen Ephesus on the internet before. I know that it is one of the best places to visit in Turkey. Every place is very special there. There are many beautiful buildings, such as the library and ancient theater. The terrace houses are also very extraordinary. You can see the traces of the daily life back then," he said.

"Excavations are still continuing, and the murals and ruins have been protected very well. Seeing this place was an incredible experience for me," he added.

Oma Aruofor from Britain said he visited Ephesus with his family. He said that he knew about the city as much as it was written in the Bible.

"We thought that it would be a good idea to visit Ephesus when were in Turkey. The Library of Celsus is a very beautiful, well protected and big building. We have read many things about the security problems in Turkey before coming. However, we didn't see any of those problems. People are very good-humored and sincere. We are really satisfied," he said.