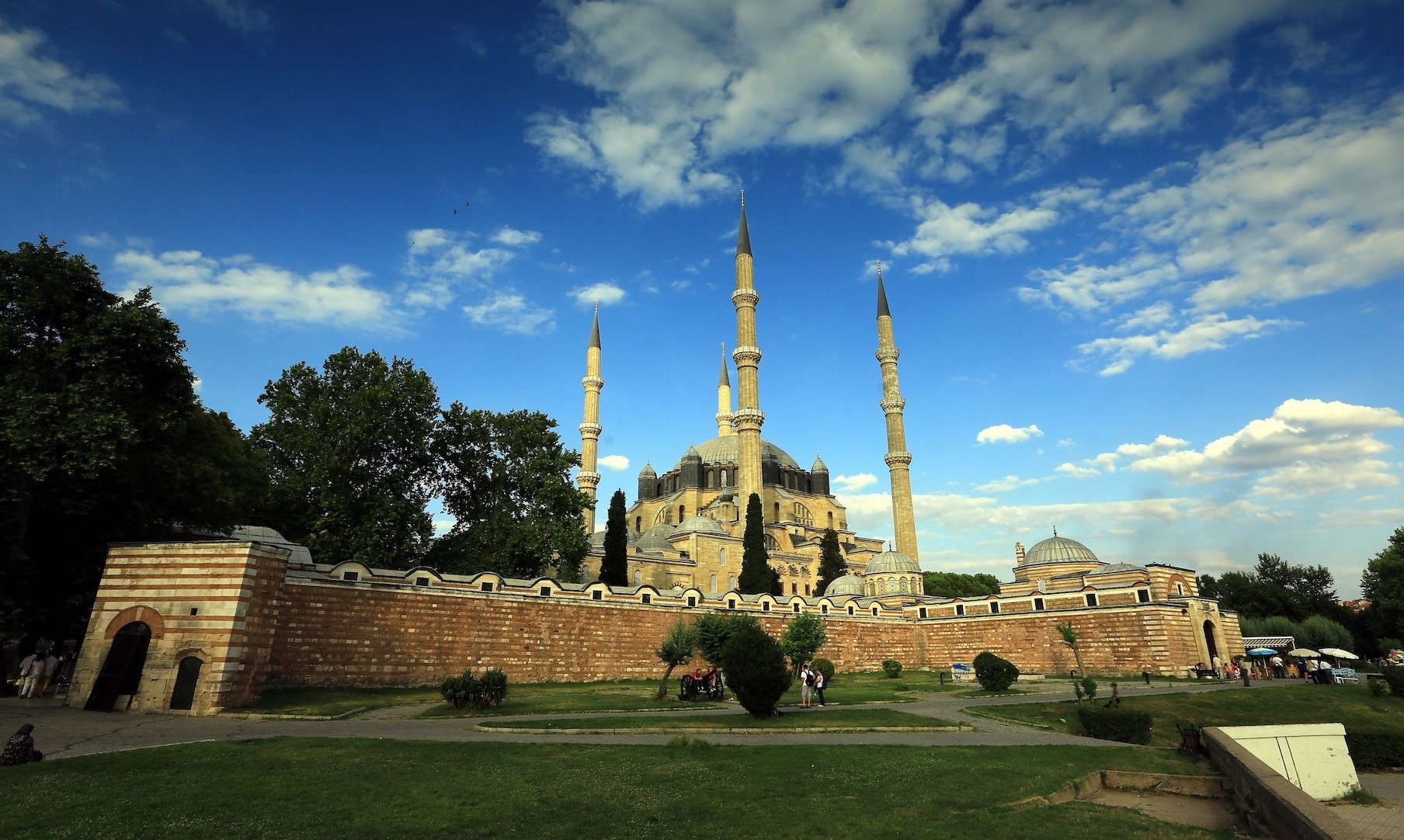 Turkey, as one of the most amazing countries to be in during Ramadan, welcomes millions of visitors every year. To help spread the spirit of Ramadan, Daily Sabah has compiled a list of the best places to visit during this holiest of months

The holiest month of Islam, Ramadan, has arrived in all its glory. Ramadan is one of Islam's five pillars alongside the declaration of faith, prayer five times a day, alms-giving and the pilgrimage to Mecca, and arrives in the ninth month of the lunar Islamic calendar. During this month, Muslims fast from dawn to dusk, an exercise in self-restraint aimed at gaining an understanding of the suffering of those less fortunate.

As this year's Ramadan is being observed during summer months, people in Turkey like to spend time outside until the first light of the next day, sharing the joy of this month.

Ramadan is believed to be a time of intense spirituality when believers are surrounded by angels, the gates of heaven are open and God's blessings and mercy are abundant. But it is also an exciting time, filling the cities' calendars with jubilant festivities that bring them to life when the sun goes down.

During this time of year, there are landmarks around Turkey affiliated with the joy of Ramadan and excellent places to visit during this holy month. This month is a great time to visit iconic mosques, Ottoman artifacts and architecture, and the sacred relics of Islam. Here is a list of places to visit to make your Ramadan even more special. 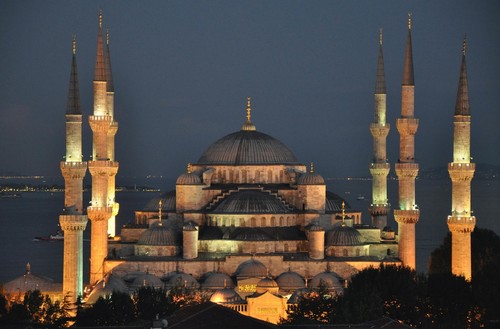 Located in Sultanahmet on the historical peninsula of Istanbul, the Blue Mosque is a place where you can experience spiritual guidance at its best. Adorned with blue, green and white İznik tiles, the mosque and Sultanahmet Square where Hagia Sophia is also located are two of the most iconic Ramadan landmarks in Istanbul. Thousands of Muslims as well as tourists gather around the mosque and the open-air iftar tables to patiently wait to break their fast. Some even pack picnic baskets and spend the night in the square until sahur, the meal eaten before dawn to start the day's fast.

Its architect, Sedefkar Mehmet Agha, built the mosque right across from Hagia Sofia, recognized as the best example of Byzantine architecture in the world. The ceramic tiles inside were produced by artisans in İznik, whose craftsmen are still famous for their intricately painted tiles today. More than 20,000 tiles decorate the interior of the mosque. 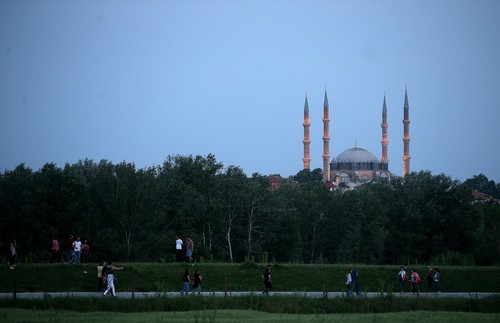 Built by order of Ottoman Sultan Mehmed the Conqueror in 1458 around the tomb of Abu Ayyub al-Ansari, an important Islamic figure in terms of Istanbul's history, Eyüp Sultan Mosque is one of the oldest and most significant mosques in Istanbul. People who want to visit the tomb of this Islamic figure flock to the Eyüp district of Istanbul 24 / 7 during Ramadan.

From the beginning to the end of the holy month, people worship and spend the night here. Eyüp visitors often prefer iftar picnics while relaxing with their families and worshiping in the iconic mosque.

It is rumored that Prophet Muhammad appeared in a dream to Ottoman Sultan Selim II and pointed him toward Edirne to build Selimiye Mosque; thus, Selim ordered the structure to be built in Kavak Square.

It took six years to construct the mosque, which was designed by Mimar Sinan, who called the 11th century structure "his masterpiece."

The former Ottoman capital, Edirne, and Sinan's masterpiece are surely places that Ramadan is celebrated to its fullest. Throughout this holy month, Muslims pay visits to Edirne and Selimiye Mosque, whose grandeur is adorned with "mahyas"- writing adorned with lights hung between the minarets of the mosques. With the aim of conveying spiritual messages through wise sayings, hadith and verses from the Quran during Ramadan, mahyas are known to have been around since the 16th century.

First used at Selatin Mosques, commissioned by the Ottoman Empire, the art of mahya also became a tradition in Anatolian cities. It is said that in addition to Selimiye's minarets, mahyas were placed between sticks fixed along the Meriç River in Edirne back in the Ottoman days.

You can also enjoy breaking your fast with Edirne's famous fried liver and the traditional Ottoman entertainment organized by the municipality. 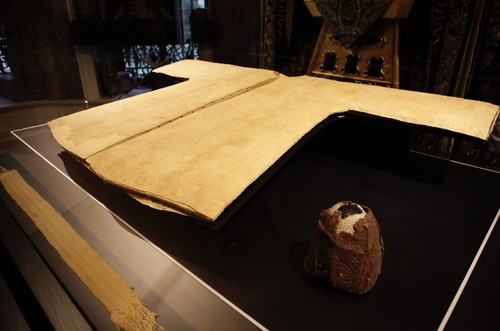 Made of linen, cotton and silk, the Hirka-i Serif (the Holy Cloak) was worn by the Prophet Muhammad and brought to Istanbul during the reign of Ottoman Sultan Ahmet I in the 17th century at a time when the Ottoman Empire controlled much of the Islamic world deep into today's Saudi Arabia.

Every year during Ramadan, the cloak is put on special display at the Hirka-i Serif Mosque in Istanbul, attracting hundreds of thousands of visitors.

The holy relic's exhibition opens on the first Friday of every Ramadan in Hırka-i Şerif Mosque in Istanbul's Fatih district and remains on display until the end of the month.

The cloak had been entrusted to Uwais al-Qarni, who went to Medina to see Prophet Muhammed in the seventh century but had to return to Yemen due to his mother's illness without seeing the prophet.

Impressed by the story, Muhammed presented his cloak to al-Qarni via companions and he received the garment in Yemen. Al-Qarni had no children and the relic was passed down to his brother and is still under the protection of the same family.

The Al-Qarni family lived in southern Anatolia for centuries; however, they later migrated to Kuşadası in the Aegean region. In the 17th century, Ottoman Sultan Ahmet I asked them to bring the holy relic to Istanbul where other holy relics of Islam were being preserved. After the cloak was taken to Istanbul, two keys were made, one for the sultan and one for the Al-Qarni family, for the locked box that the cloak was displayed in.

Istanbul hosts most of its holy relics in Topkapı Palace since Sultan Selim's conquest of Egypt in the 16th century where he seized items of the prophet then in the custody of the Mamluk caliphate, along with the control of the global caliphate of the Muslims. Among them is a battle standard from the prophetic era, a tooth of the prophet and hair from the prophet's beard as well as his sandals and a bowl he used.

The Tomb of Mevlana - Konya 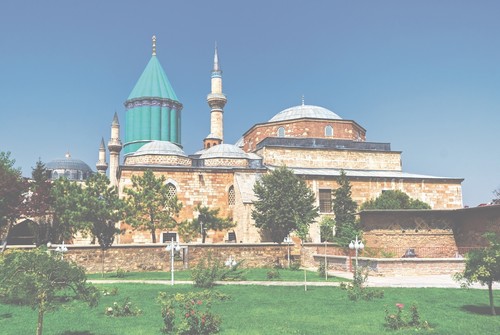 The homeland of Mevlana (Rumi) is perhaps one of the best places to visit during Ramadan. Konya, which is a very spiritual and rooted city located in the central Anatolia, also has the second-most visited tourist attraction after Topkapı Palace in Istanbul: The Tomb of Mevlana.

The distinctive green conical dome covering the tomb of the philosopher, poet and religious leader is the symbol of Konya and the city's main attraction. His tomb, which incorporates the tekke (lodge) of the world famous whirling dervish sect of Sufism that he founded, is now the Mevlana Museum where pilgrims and tourists come to pay their respects to one of Turkey's — and the world's - greatest religious mystics.

Mevlana is one of the world's most read poets. During his life and since his death in 1273, pilgrims have flocked to Konya. He was a mystic, a Sufi who loved all religions and a man whose own religion was love. His followers would - and still do - lose themselves in trance and dance, sometimes spinning like tops for hours on end.

The general structure of the lodge dates back to 16th century, long after Mevlana's death. The only part of the lodge that dates from the 13th century, when Mevlana was alive, is his mausoleum. The museum and the tomb will be open throughout Ramadan.