Pamukkale: A paradise of history, wellness 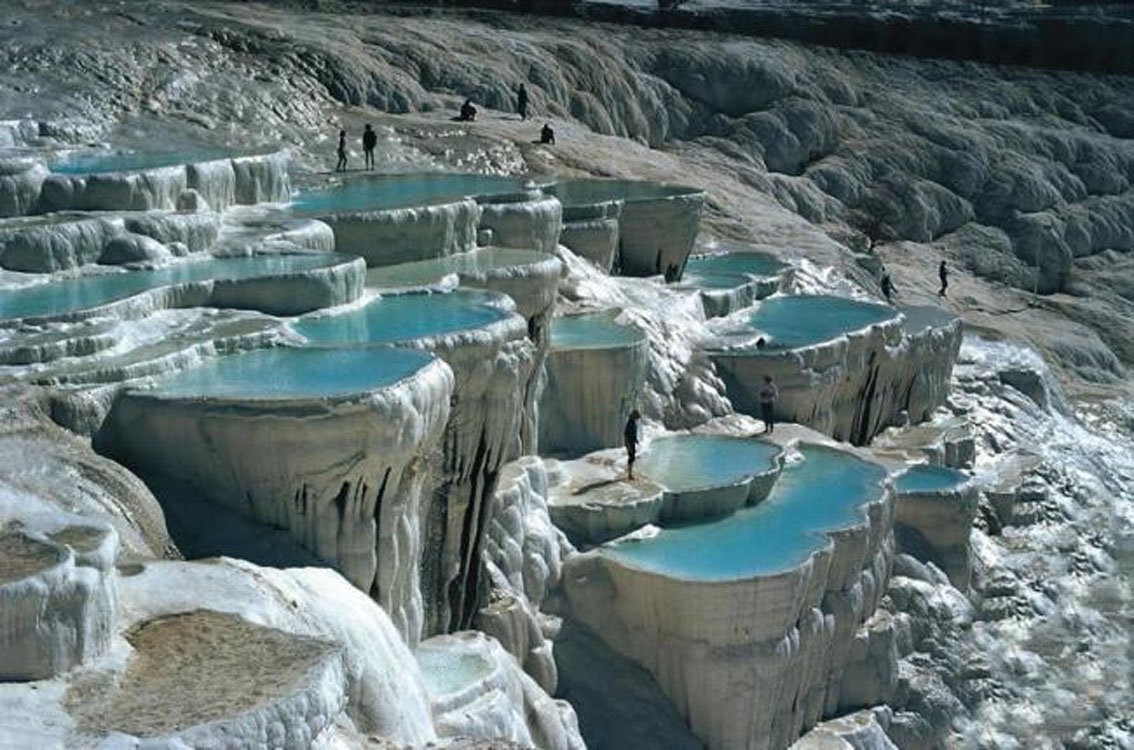 With its healing springs, Turkey's 'white paradise' feels more like something out of a fairy tale. It offers natural wellness and treatment opportunities that have been celebrated for centuries

Pamukkale, which in English translates to "Cotton Castle," is located in the southwestern province of Denizli standing over the ruins of the ancient and sacred city of Hierapolis. This magical place is especially famous for its white limestone travertines shaped by calcium-rich hot springs and has been used as a thermal treatment center for millennia. The spot's first spa dates back to the founding of Hierapolis, established by Eumenes, king of Pergamum, in the second century B.C.

Journey to the past

This city of travertines has long been home to various civilizations and it is possible to trace them back from the dusty pages of history through the ruins of each ancient city.

The best preserved structures belong to the ancient city of Hierapolis. 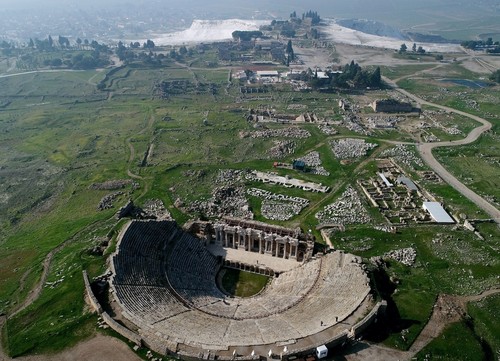 Hierapolis flourished, reaching its peak in the second and third centuries A.D. under the rule of the Roman Empire. However, the city was destroyed by an earthquake in A.D. 60 and later rebuilt. The ruins of the Greco-Roman period include remnants of baths, temples, a monumental arch, a nymphaeum, a necropolis and a theater. Following the acceptance of Christianity by the Emperor Constantine and his establishment of Constantinople as the "new Rome" in A.D. 330, the town was converted into a bishopric. As the place of St. Philip's martyrdom in A.D. 80, commemorated by his martyrium building in the fifth century, Hierapolis with its several churches became an important religious center for the eastern Roman Empire.

The ancient city of Hierapolis is located in the Aegean region and was added to the UNESCO World Heritage List in 1988.

The Temple of Apollo was raised for the town's principal god during the late Hellenistic period. In time, the temple was destroyed; however, Romans rebuilt it using stones from the old temple, but in Roman fashion. The ruins can still be visited in the ancient city.

The remains of the Byzantine city walls, the ruins of the octagonal Martyrs' Church of St. Philipus and the Arch of Honor of Emperor Domitian from the first century complete the journey into the past, which is accompanied at every turn with views of the fantastic "Cotton Castle." Pamukkale is, in the truest sense, a wonder.

The pool, which was formed naturally after the collapse of a series of columns in an earthquake in A.D. 692 causing thermal water to accumulate, offers visitors a unique experience. Its water temperature is fixed at 36 degrees Celsius.

Since ancient times, the springs of Pamukkale have been seen as gift from nature for the mankind. The water is said to be good for rheumatism, cardiovascular diseases as well as skin and nerve diseases.

Among the ruins of Hierapolis, a Roman bath with high-vaulted ceilings is particularly well preserved. It houses an archaeological museum that is home to ornate sarcophagi. Just behind the museum is the Antique Pool. In the pleasantly warm spring water, you take a relaxing swim between ancient column sections.

The phenomenon of Pamukkale continues just over 5 kilometers away in the village of Karahayıt which has its own wonder, only in color. Here, too, hot water flows but iron and sulfur have colored the rocks in bright reds, yellows and greens. Though impressive, it still does not compare to the sinter terraces. The original white terraces are by far a favorite for visitors.

It is worth spending the night in Pamukkale, especially during a full moon. You can swim after dark in the small lake located just down the slope. As the pale light settles on the deserted terraces, one can only sit in silent homage and marvel at its unworldly beauty.

Particularly in the last 20 years, the area's popularity has spiked as an increasing numbers of Turks and foreign tourists have begun visiting the baths again. Today Pamukkale ranks among the most-visited sites of southwestern Turkey, along with Ephesus, Pergamum, Sardis and Aphrodisias.