Edirne: The city that honors history 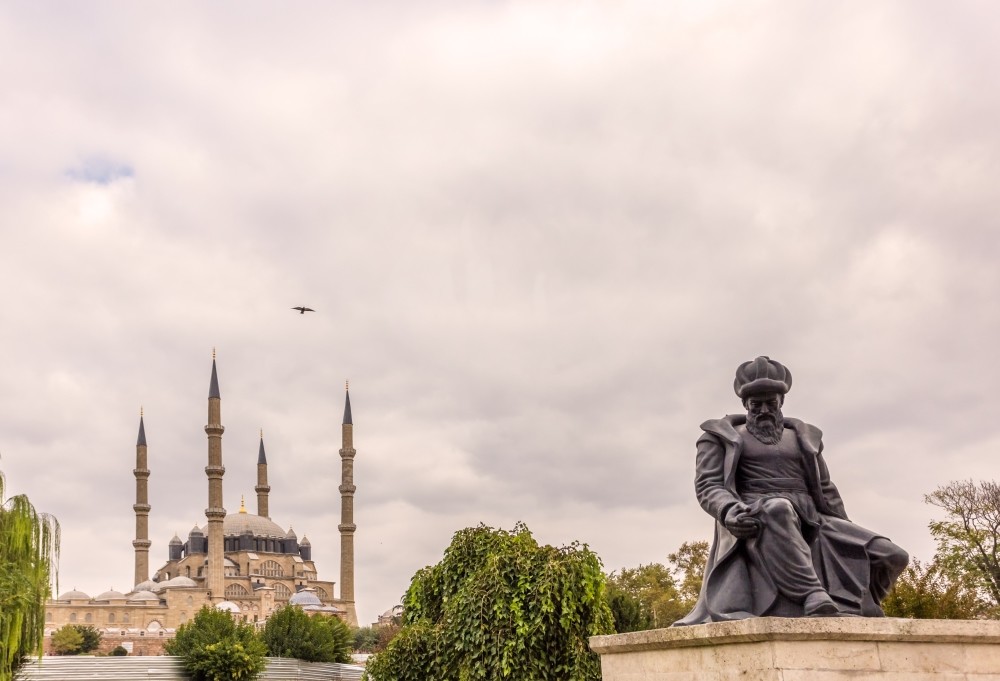 Edirne once witnessed the rise of the Ottoman Empire, today it still bears the soul of the empire and celebrates it with centuries-old festivals and rich cuisine

Beautiful Edirne, historically known as Adrianople, served as the capital of the Ottoman Empire until Sultan Mehmed II, known as Mehmed the Conqueror, went and conquered Istanbul and changed the capital. The city, from which you can head to the Greek and Bulgarian borders by walking, hosts festivals near the Tundzha and Maritsa rivers especially in the summer months. Kırkpınar Oil Wrestling, Kakava Festival and Fried Liver Festival (fried liver is Edirne's signature dish) draw attention. The city also features cultural richness, such as handicrafts of Edirnekari, Edirne tile, brooms decorated with mirrors and wrestler's tights and the craft of gravestones. Edirne comes second after Florence in the world rankings of cities which have the highest number of historical works per square meter.

The first must-see place in Edirne is surely the Selimiye Mosque, which Ottoman architect Mimar Sinan, known as Sinan the Architect, described as his masterwork. Registered in the United Nations Educational, Scientific and Cultural Organization (UNESCO) World Heritage List, the mosque is the most respected construction in the city. It was built with the order of Sultan Selim II, known as Selim the Blonde, between 1569 and 1575 on the highest point of the city.

Its 71-meter-long four minarets are located in the center of a large social complex which includes a madrasah. The main entrance, which is accepted as some of the best of Ottoman architecture, passes through the west yard where a beautiful shadirvan, a type of fountain, is located. The dome in the mosque, which has a 31.3-meter caliber, is supported by eight columns which are larger than the ones in the Hagia Sophia. With the large dome, an impressively spacious, indoor environment was created.

Many painted, calligraphic ornaments in pink and blue shades are revealed by the sunlight. If you like the Blue Mosque, you will also love this mosque as it is a replica of the Blue Mosque. Reverse tulips which are the symbol of Edirne are carved on a marble in the fountain under the centra

l dome of the mosque. It is believed that the tulip symbolizes the owner of the tulip garden on which the mosque was built as he unwillingly gave the garden.

Heart of the festivals

Sarayiçi is the place where the Old Palace was built on the order of Sultan Murad II in the 15th century. It is possible to see some remains of the building, which was destroyed in an explosion, to prevent the Russians from capturing the armaments hidden inside, before the Russo-Turkish War in 1877-78. The kitchens where the Ottoman palace kitchen used to be was rebuilt.

The area, which was once a special place for sultans to hunt, hosts a modern stadium where the Kırkpınar Oil Wrestling Festival and Kakava Festival are organized now. Adalet Palace, which has a conical roof dating back to the period of Suleiman I, known as Suleiman the Magnificent, is located next to the stadium, is surrounded by the bronze statues of the wrestlers-in-chief. Behind the palace, there is the small Fatih Bridge, which was built in 1452. The Balkan Wars Memorial is located across it, while the scattered remains of the Old Palace can be seen on the left of it.

There is also Kaleiçi. It is known for the old streets on the south of Talat Pasha Street and on the west of Saraçlar Street. The heart of this old city dating back to the Medieval Age consists of a series of wooden houses and some stone buildings. If you want to see the traditional houses of Edirne, keep the Kırkpınar House,

which is right across the Police Park, in your mind. Some of them have been restored recently. The Mihran Hanım Mansion on Gazipaşa Street is a good example. However, most of them house have been ruined. Another important mosque of the city is the Sultan Bayezid II Mosque. It was built near the Tundzha River between 1484 and 1488 with the order of Bayezid II. Its design is similar to the other two mosques. The big dome of the prayer room is like the Selimiye Mosque's dome. Furthermore, it has a yard and fountain like the Üç Şerefeli Mosque. It comprises of a complex, guest house, mental ward, medical madrasah and hospital. Even if it is not at a prominent place in the silhouette of Edirne like the Eski Mosque, Selimiye Mosque and Üç Şerefli Mosque - the Sultan Bayezid II Mosque has an important place in the city. It also hosts a faithful community.

The Üç Şerefli Mosque, which was built between 1437 and 1447 with the order of Sultan Murad II and has four different minarets, is located in the center of Edirne. It was named after the three minaret balconies of the highest minaret. The second highest minaret has two balconies while others have only one. The mosque is installed on a hexagon pulley. It has a well-decorated inner dome which is supported by two big hexagon columns. The city houses many historical and art works. Macedonia Tower, Sokullu Mehmed Pasha Bath House, Archaeology Museum, Islamic Works Museum, Şükrü Pasha Memorial, Balkan Wars Museum, Muradiye Mosque, Trakya University, which is the old railroad station, and Lausanne Memorial are among the places that should be visited. You can take a break at Saraçlar Street in order to shop and eat and then see the wooden houses on Maarif Street.

One of the other important places in the city is the Grand Synagogue of Edirne, which tells a history of its own. It was one of the first settlements of Jews who came from Spain in 1492. The synagogue was reopened after 36 years and after five years of restoration work costing $ 2.5 million. It is the only reminder of the more than 20,000 Sephardims who lived in the city. The building, which was built in 1906 after 13 small synagogues were burned in the Great Fire of Edirne in 1903.

It has an elegant, arched roof and well-decorated floors. When the synagogue was built, it welcomed worshipers until the 1200s. Its vivid, yellow facade shines among the faded wooden houses and apartments of the old Jewish neighborhood of the city. The synagogue is used for religious aims as well as being a museum today.

Eat before you leave

I recommend eating at the Lalezar Restaurant near the river in Edirne. Later, do not forget to buy almond paste, Kavala cookies and Hıdırellez cookies which are the restaurant's popular production. You can visit the Atatürk Room in the historical Municipality Building. If your visit coincides with a festival, it will be better, because Edirne does not sleep during festivals. Remember to taste the fried liver. You can also buy some aromatic soaps in order to have a good smell in your home.