Cappadocia: Step into the magical land of beautiful horses 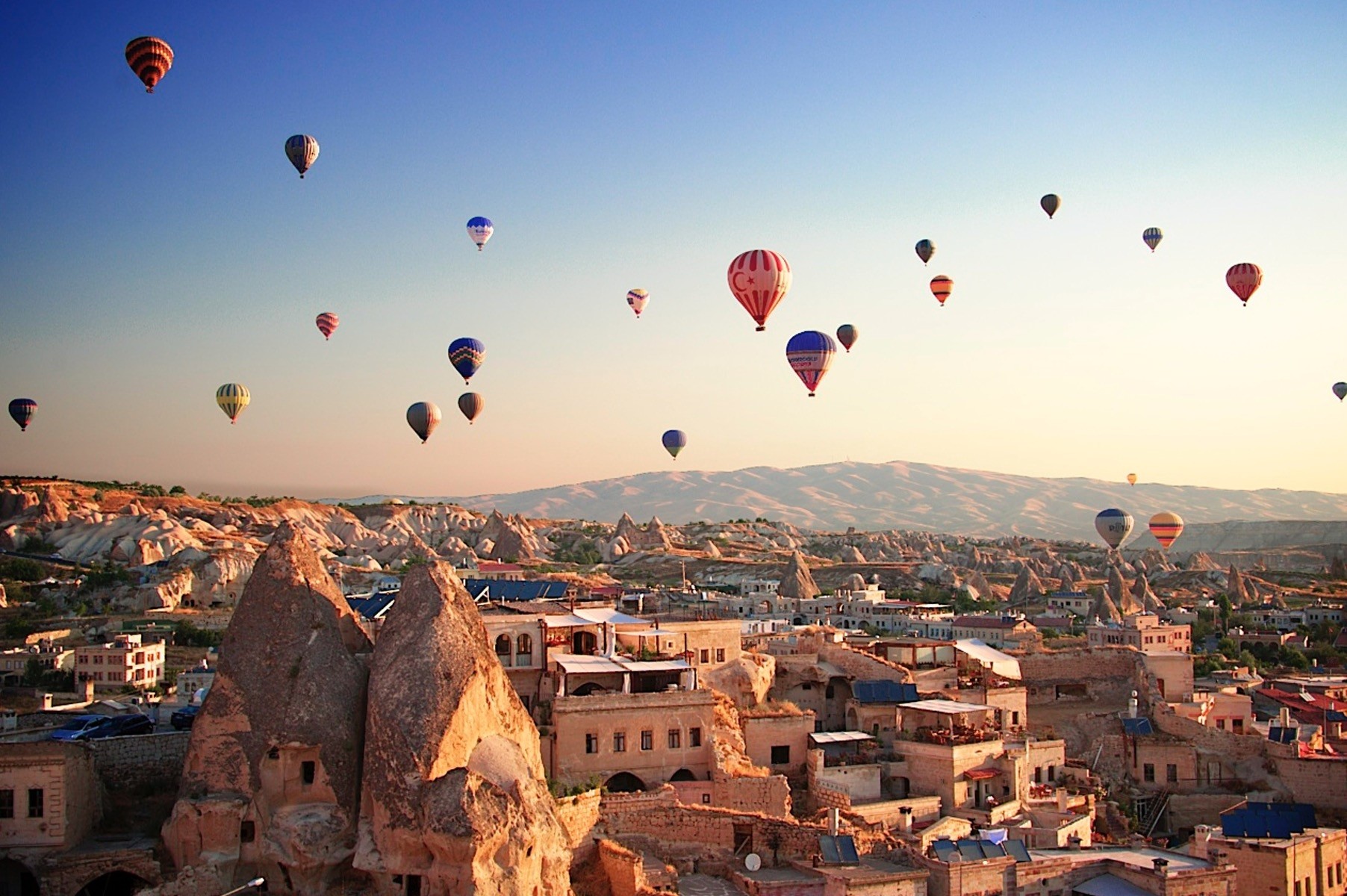 Hot balloon tours are the signature of Cappadocia as visitors observe mesmerizing sunrises and sunsets over the landscape.
by Anadolu Agency Jul 04, 2018 12:00 am

With its dramatic landscape along with historic and cultural heritage, Cappadocia presents a unique experience for tourists.

Tourists visiting Cappadocia can explore the region on horseback and lodge in tents set up between the fairy chimneys. Along with short trips on horseback organized in the region, foreign tourists have also been showing growing interest in the three or four day tours.

Tourist can get in touch with nature thanks to horseback tours, and can spend the night outdoors under the stars then head home at daybreak. For horseback tours tourists leave from horse farms in Göreme early in the morning, wandering between valleys covered with natural rock formations and riding easily on horseback thanks to the plain landscape. 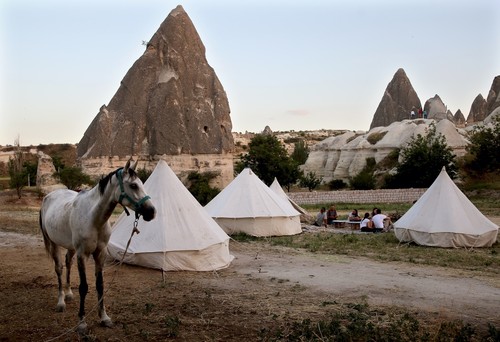 Cappadocia, which means "the land of beautiful horses" in Persian, hosts tours on horseback during which tourists can feel the spirit of this fairytale-like land.

In the area where tourists meet to start their different tours you can see people galloping on horses in the direction of the tours, making for a fascinating photo opportunity.

Watching the sunset while strolling through the incredible landscape shaped through the erosion of the ancient volcanic eruptions of Mount Hasan and Güllüdağ, the tourists spend the night in tents set up next to the fairy chimneys.

The tour company's employees cook and brew tea over a wood fire and display top-notch hospitality to their guests spending the night in the outdoors.

On the low-lying tables among the tents, tourists from different countries eat together and partake in sincere conversations away from technology.

Gathering around a bonfire, the tourists enjoy a few peaceful hours under the stars while musical instruments play through the night and help create a serene atmosphere. After spending the night in tents, the group continues their tour in the morning by taking a stroll through the valleys again. 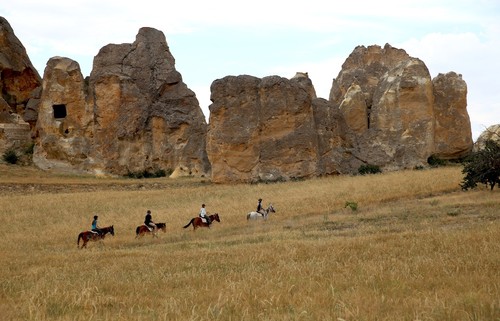 İrfan Özdoğan, who has been organizing overnight horseback tours in the region for three years, said that tourists can only see a limited number of destinations in the day-long or hourly trips organized in the region, however those joining longer tours have the opportunity to explore the entire region.

Özdoğan stated that those joining the tours to spend time in the tranquility of nature leave the region content, he added that they receive thank you notes in the mail from many tourists.

"We present tourists with an opportunity to get closer to the fairy chimneys in Cappadocia and organize trips between the natural formations. We are climbing down the valleys and up the hills. So, we offer them a chance to experience riding on horseback through nature. During the day, we determine different routes according to our condition and organize camps in the evenings. We are eating and organizing some entertainment while camping. The tourists joining the tours are pleased to discover nature in such a way. They experience nature in all its authenticity. They lay low tables in the camp and spend a few beautiful nights away from technology," said Özdoğan.

Dilari stated that the horses employed in the tours generally comprise of ones retired from racetracks. "Everyone should experience this kind of camping. Spending the night in nature after touring Cappadocia on horseback is a unique feeling. The horses employed in the tours come from various regions of Turkey. Generally, the Arabian horses are retired from racetracks and come here. Also, we raise our own horses in a variety of breeds."

Joining the tour and lodging in a camp in Görkündere Valley, Australian tourist Greg Tischljiar said that he enjoyed the tour very much and would recommend his friends to visit Cappadocia after returning to his country.

Tischljiar said: "Cappadocia is a wonderful place, there cannot be a better place to travel to. I heard that the region had a unique landscape, so I wanted to visit. I wandered through very interesting landscapes thanks to the horseback trip."

Danielle Prince from Australia, said that she went on the tour with her friend to explore the region on horseback, she expressed that she was amazed by the natural beauties of Cappadocia. Prince also said that she wanted to visit Cappadocia when she saw pictures of the region, adding that the region is far more amazing than the photos.