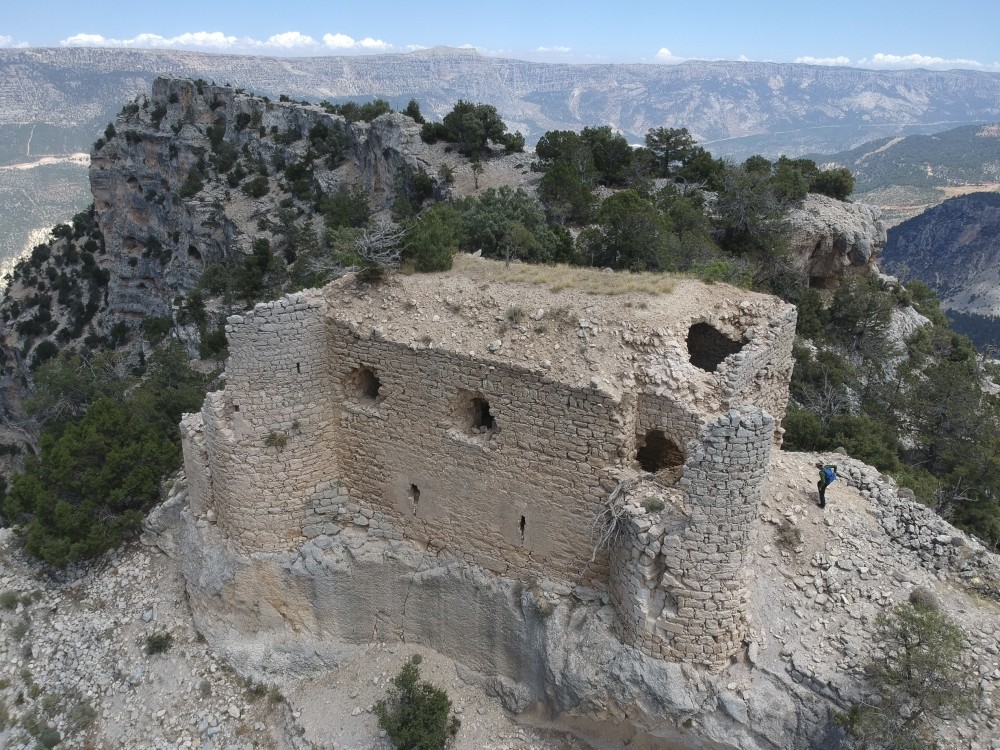 Mennan Castle, located on a peak of the Taurus Mountains in Ermenek district of Karaman province, offers mesmerizing beauties for history, nature and photo lovers.

It is not known when the castle, which was difficult to occupy as it was built on a steep field, was built. However, the structure, last used by the Karamanids, was also used in the Hittite, Lydian, Assyrian, Persian, Roman, Byzantine, Seljuk and Ottoman periods.

People can reach the castle via a narrow lane on the Mazı plateau. The structure sustains its existence with its cisterns, stores, asylums, bastions and hidden tunnels, and has remained strong over time, even as it witnessed various wars.

According to historical sources, Pir Ahmed Bey from the Karamanid dynasty took shelter in Mennan Castle after losing the war he waged against the Ottoman Empire during the reign of Mehmed II, known as Mehmed the Conqueror. Following him the Ottoman Grand Vizier Gedik Ahmed Pasha occupied the castle.

Visitors today can reach the castle after a tough journey, first they must make their way 33 kilometers away from Ermenek district close to a forest; they then have to complete a five-kilometer walk through the forest following a junction the castle welcomes them.

Ermenek Mayor Uğur Sözkesen told Anadolu Agency (AA) that the district has a 5,000-year history. The district was established between the castles of Firan, Asar and Mennan, and is a settlement that hosted the Karamanids.

Noting the Karamanids fell here, Sözkesen said, "It is possible to see a bridge, mosque, madrasah or castle dating back to the period of the Karamanids in any settlement in the Mediterranean or Central Anatolia regions. They brought their culture whereever they went. The starting point of this great civilization is Ermenek. The Mennan Castle is one of the works of this civilization. The time when it was built is not known. It was renewed and made an important point for the region in the past."

The mayor stressed that another important feature of the Mennan Castle is that it was the last land the Karamanids lost. "The castle's region is hard to reach. It has only one connection. It was not possible to get to the castle from other directions. It was in a really safe place in terms of the protection of people. The area of the castle is a first-degree archaeological site. We, as the municipality, applied for its restoration. We prepared projects and are waiting for permission. When the restoration of Mennan and the other two castles are completed, they will be opened to for the public and tourists. The Mennan Castle is already on the route for nature lovers. Many photography and nature sports clubs receive information about the castle and the region by calling us."

He added that it is necessary to walk on a hard track to reach the castle, "When visitors reach the peak, a perfect historical building welcomes them. The Ermenek Valley can be seen with its all beauty from here. I invite everyone who has the opportunity to come here."