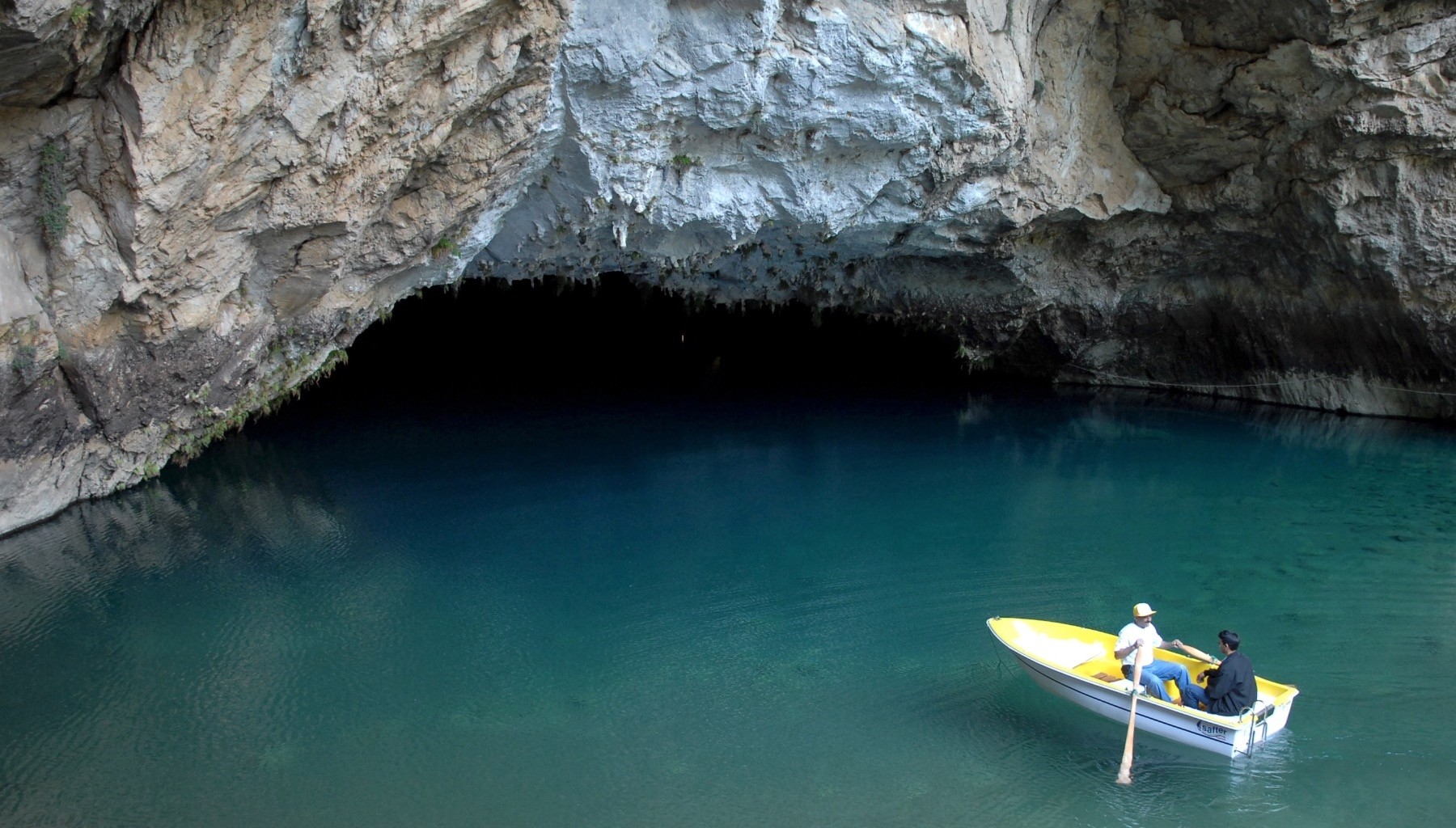 Located in the peaceful rocky foothills of İbradı district in Antalya province, Altınbeşik Cave is a favorite spot for locals and foreign tourists alike who are charmed by its turquoise water and the resident birds' sweet songs and chirps

Altınbeşik Cave can be reached by passing through Ürünlü Neighborhood, just 23 kilometers outside of İbradı. It is the biggest water cave in Turkey and the third largest in the world.

The deep turquouise water of the cave can be explored by boats that offer tours around the site's stalactites, stalagmites and travertine. One level of the three-story cave is open to the public, who can board one of the eight daily tour boats. One of the most interesting caves in the world, it offers a mysterious journey in its deep water.

The cave's air temperature averages around 15 degrees Celsius. The name Altınbeşik means "gold cradle" in Turkish and was inspired by the cave's yellow arches that resemble cradles. Since the cave is home to many species of birds, visitors are often serenaded by chirps and the sweet songs of the cave's inhabitants.

The site is managed by Antalya Metropolitan Municipality. İbradı Branch Manager Muharrem Kaya told Anadolu Agency (AA) that the cave sits at a 450-meters above sea level and is located at the beginning of the Taurus region.

Noting that it was discovered in 1966 by geological engineer Temuçin Aygen, the first scientific researcher of caves in Turkey, Kaya said: "The cave is three stories high. People can tour the first level. You can reach to the second level after a 44-meter climb. It is 200 meters in length. The third level can be accessed from the pond on the second level. Mountaineers can advance for 5,500 meters in this part."

He stressed people are surprised that there is such an impressive cave in Taurus and that people can tour it by boat. The branch manager also said they hope to open the second and third parts of the cave to the public.

While discussing the fact that 25,000 local and foreign tourists visited the cave last year, Kaya added: "It opened for the season in April. We welcomed 25,000 visitors in the first three months of this year. We hope to break the record by exceeding 100,000 tourists."

Tourism professional Tolga Özgüven, who has boutique hotels and an agency, explained that the cave, 5.5 kilometers of which has been explored to date, is connected to Lake Beyşehir in Konya province.

"It is an important in terms of tourism. Tourists interested in the cave come from all over the world, with the majority from Germany, France, the Netherlands and the U.K. The number of visitors doubles every year. This year, it will quadruple. Big tour companies have also shown interest in the cave," Özgüven continued. Elif Aslan, from Istanbul, said touring Altınbeşik Cave is peaceful. She added, "I'm glad I was able to visit. It's a beautiful place filled with the songs of birds."