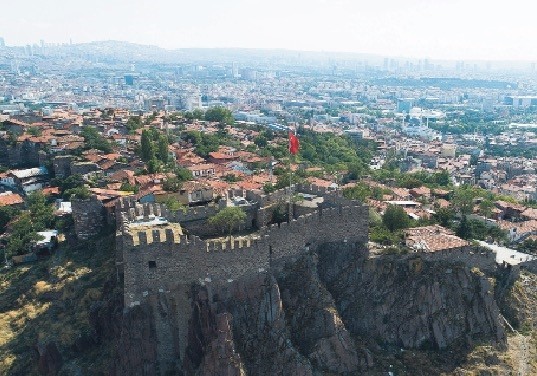 Ankara Castle sits on a strategic position overlooking the city.
by Anadolu Agency Aug 14, 2018 12:00 am

Dating back to the Roman, Seljuk and Ottoman Empires, Ankara Castle is one of the Turkish capital's oldest sights and a beautiful destination for visitors with its historical and cultural background

Offering a grand view for its visitors, Ankara Castle stands out as an important symbol of Turkey's capital city. Its surrounding neighborhoods still have an old city charm that compliments the ancient city walls that once offered defense and protection.

Famous Ottoman traveler Evliya Çelebi, who visited the city toward the middle of the 17th century, said: "There's a solid fortress made of white quartz stone on a tall mountain in Ankara. The castle is surrounded by walls that extend three stories high. The inner castle is rocky. It's very hard to climb into the castle on these slippery rocks. There are cannons, various weapons, ammunition and 600 houses inside the inner castle. The inner castle is surrounded by a second series walls. There is a third outer wall on the slopes of the mountain. The outer walls secured the whole city in the past."

According to information collected by Anadolu Agency (AA), the castle was built approximately between 476 B.C. and 33 B.C. and underwent changes in almost every period; yet, it consists of the inner castle covering the highest section of the hill and the surrounding outer castle.

It has a strategic position looking over all parts of Ankara and has been used as an army base, an ammunition store and a surveillance center for defense over the years by states that have ruled the city throughout history.

It has towers shaped like saw teeth, and there is a tax epitaph in the name of Abu Sa'id Bahadur Khan, the great ruler of the İlkhanid state near the entrance, or the "Fortress Door." Along with the epitaph, which is considered one of the most important examples of trade and tax laws of the period, there is a clock tower constructed by the French in 1885 to the left of the door. 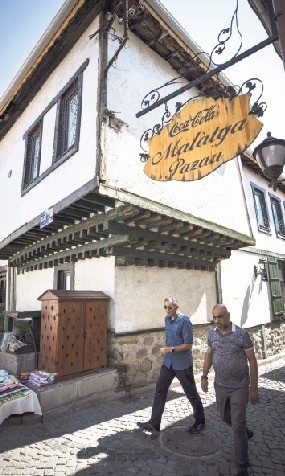 Two or three-story Ankara houses in the castle are built with wood, adobe and bricks.

The castle also has small squares used as different market places. The Atpazarı, Samanpazarı and Koyunpazarı squares have been used as trade and gathering centers in every period and still continue to be used today.

Each era of construction for the walls can be deciphered. Shaped by the masonry of the period, the stones in the lower section were placed during the Roman period and higher sections during the Byzantine, Seljuk and Ottoman periods. Each tells a story in Ankara Castle's history.

The historic neighborhood in the castle

There are many "Ankara houses" built in different periods inside the castle.

The classic two- or three-story Ankara houses in the neighborhood of Kaleiçi built with wood, adobe and bricks make the most of the narrow spaces in the castle's steep areas.

Local and foreign tourists visiting the city can witness neighborhood culture that never goes out of fashion with children playing on the streets of İçkale (the Inner Castle), people returning with shopping bags and the bouncing echoes of shouting tradesmen.

The castle features a mosque, inn and museum

Located in İçkale, Alaaddin Mosque, the oldest known mosque in Ankara, was built during the reign of Mesut bin Kılıçarslan according to the epitaph on its minbar. Ramazan Şemsettin Mosque, Musafir Fakih Mosque, Giant Duran Mosque and Cenab-ı Ahmet Mosque are also located in İçkale.

The Arslanhane (Ahi Şerafettin), Ahi Elvan and Ahi Yakup mosques are located in the Dışkale (the Outer Castle). These mosques were built by representatives of the tradition of "ahilik" (Turkic Islamic guild), which was the artisan solidarity organization of the time.

Çengelhan, Çukurhan, Kurşunlu Han, the Pilavoğlu Inn and the Safran Inn were also trade and accommodation centers built for different purposes at different times inside the castle. Today, Çengelhan and Safran Inn are being used by Rahmi Koç Museum, while Kurşunlu Han is home to the Museum of Anatolian Civilizations.

First museum of the history of the republic

Akkale, where the Turkish flag flies, is located inside the borders of İçkale. The site is closed to visitors and under the protection of the Museum of Anatolian Civilizations. This castle's walls sit on a steep hill, the highest point in the region.

Akkale was built during the Seljuk period, and the walls of İçkale were built for security during the 15th century Celali rebellions. This section of the castle hosted small garrisons during these periods.

The first museum in the castle, Eti Museum, was founded with the support of the founder of the Republic of Turkey, Mustafa Kemal Atatürk, in 1921 and built in the highest tower of Ankara Castle. It served as the first museum of the republic until 1948.

There are also passageways and secret doors that would have allowed people to escape during a siege. While these passageways are closed today, you can still see their columns when you look at the castle from the outside.