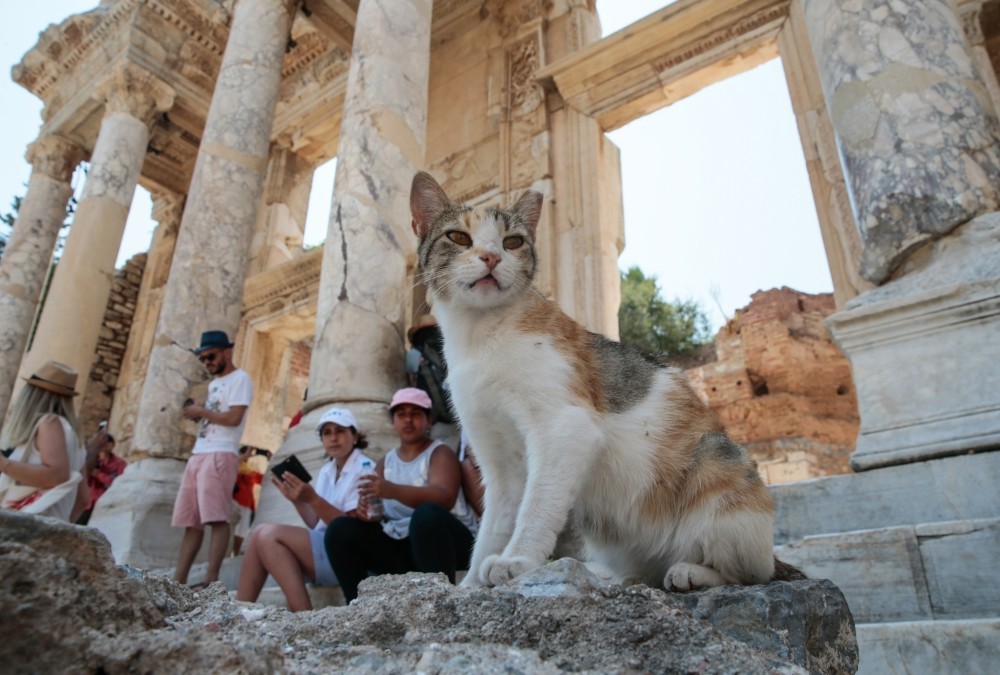 Dating back to the third century B.C., the ancient city of Ephesus has hosted numerous civilizations throughout its history. But its newest residents are not people but cats - and there are lots of them.

Located in modern-day İzmir on Turkey's Aegean shores, Ephesus is a popular tourist destination and a UNESCO World Heritage Site.

The ancient city is also home to many stray cats. The cats of Ephesus welcome tourists at the entrance and sometimes accompany them throughout their visits. Strolling through ancient remains and taking selfies with the tourists.

In summer, the cats can be seen relaxing in the shadows of ancient monuments. In winter, they take shelter in the cat houses build by the site authorities.

The cats are often fed by the tourists and the management. Though a strange sight, cat food can be found almost everywhere around the ancient site.

It is not certain how long the cats have been living among the remains but it seems that the tourists love these little guides.

Speaking to Anadolu Agency (AA), general director of Ephesus Museum, Cengiz Topal, said that they have not yet received any complaints about the cats from tourists.

"We do not know how long they have been here but surely they were here when the first excavations began. There is no special place for cats on the site but some of them love to gather around certain spots, like the entrance. I believe there are more than 100 stray cats here in Ephesus," said Topal.

Manuella Dagher, a tourist from Lebanon, said they came to İzmir for their honeymoon. They were excited to see Ephesus and its cats!

"I saw the cats as soon as I stepped into the site. I love cats and it is not a problem that they are here. I was glad to see that they are being cared for. I have never seen so many cats in an ancient site," Dagher said.

The excavation in Ephesus began in 1863 and approximately 2 million tourists visit Ephesus every year.