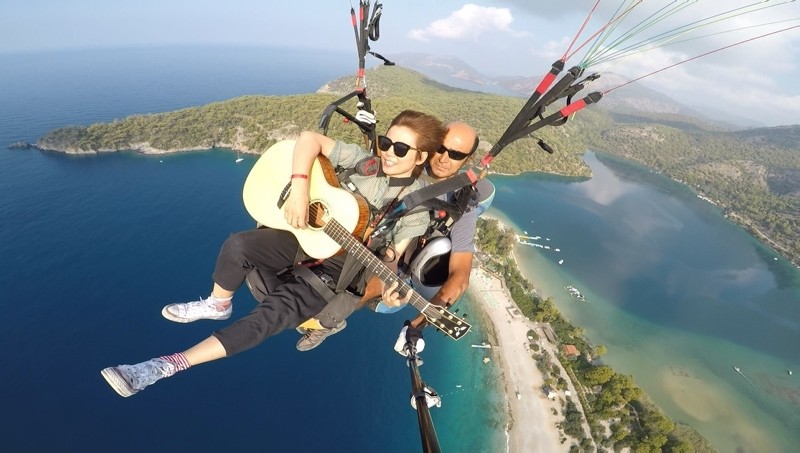 A Chinese artist has stolen the spotlight on social media by reaching a record-breaking 70 million views with her video showing her paragliding in famous southwestern Turkish resort town of Fethiye while playing the guitar mid-air.

The footage showed the popular artist Xu Fei playing the guitar coolly while paragliding with her instructor in Fethiye's Babadağ overlooking the famous Ölüdeniz cove.


Fei is one of the many guests of The Yunus Emre Institution, which has been hosting many media figures, celebrities and journalists as part of the "Be Our Guest" project launched this year. The project aims to expand Turkey`s relationship with China by working on mutual projects and thus achieving cultural diplomacy.

The Yunus Emre Institution has also invited members of various fields, including journalists and celebrities like Chinese actor Will Lie and his wife Wang Pei Yun. In addition, CEO`s and board members of China`s most popular social media platform Yi Dian-Zixun, which has over 560 million users, are also in Turkey. The guests enjoyed tours in Istanbul to many different historic landmarks like the Topkapı Palace, the Spice Market, Hagia Sophia among many others.

Xu Fei is a Chinese singer-songwriter who is slowly rising in China with many praises from her fellow pop stars. In 2006, Fei finished in 6th place in "Super Girl," a Chinese talent show similar to "The Voice."