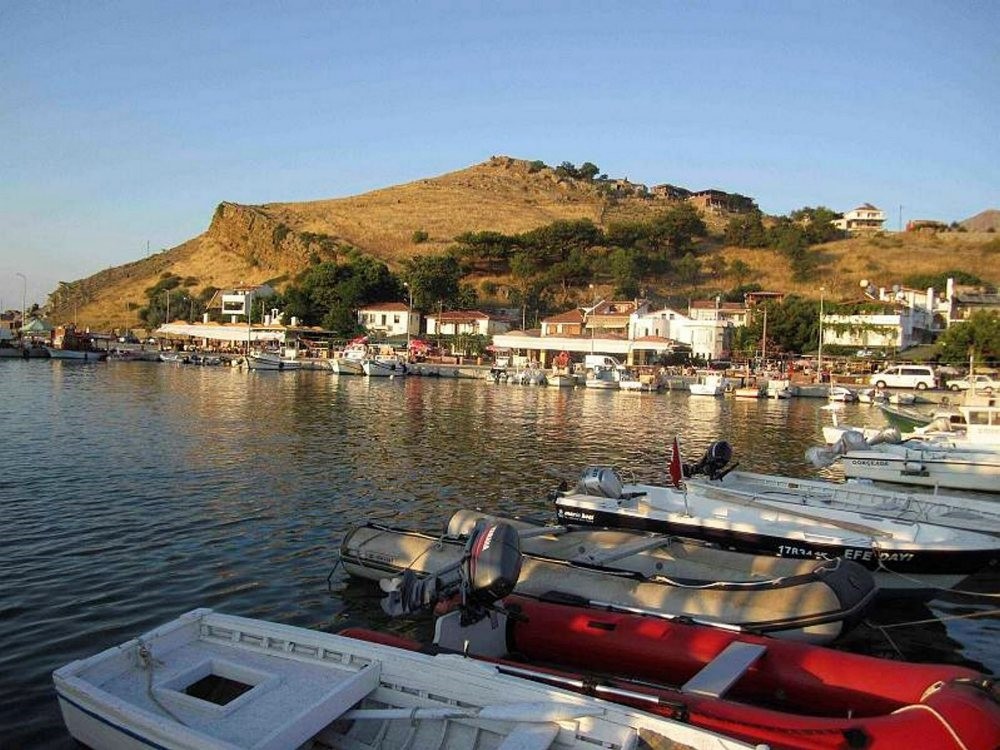 The largest island in Turkey, Imbros is one of the best places in the country to get away from it all; its lush green landscapes and the blue of the Aegean Sea make it unforgettable

Imbros, also known as Gökçeada, is located in the North of the Aegean Sea and at the entrance of Saros Bay, aka the Gulf of Saros. Having a 91-kilometer-long coastline, the island features İncirburnu, a place which is the furthest west in Turkey. As a district of Çanakkale province, Imbros is among the haunts of local and foreign tourists. There are flights between Imbros and Istanbul two times a week. The island can be reached by sea transportation, as well.

Having an excellent landscape, the island welcomes its visitors with various colors ranging from deep reds and greens to light turquoise and dark blue. Here is a guide to visiting the largest island of Turkey.

Must-see places on the island: Kaleköy

Kaleköy is one of the oldest villages in Imbros. Located 4 kilometers from the district center, the village is two parts: Aşağı (Down) Kaleköy and Yukarı (Up) Kaleköy. Aşağı Kaleköy is the place where summer nights are spent most liltingly. Its cordon, tea gardens, restaurants and bars draw the attention of visitors. 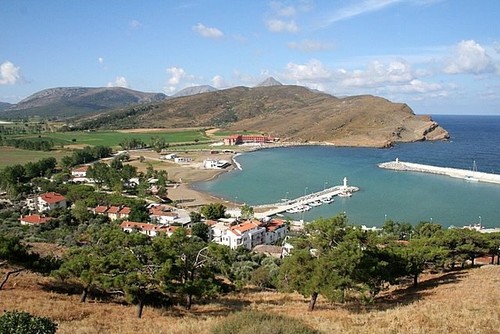 Kaleköy draws the attention of visitors with its nature.

In Yukarı Kaleköy, İskiter Fortress, one of the oldest historical places on the island, is situated. Built by the Genoese, the fortress has strong walls that stand still. Besides, it overlooks Çınarlı Plain, Aşağı Kaleköy, Yenibademli, Eskibadem and Zeytinli Villages. You can also see Yelkenkaya, which resembles a sail and can be reached only by sea, if you look to the northeast.

Yıldızkoy is one of the most beautiful and memorable bays on the island. It draws attention with its different rock formations. You can come to the bay, passing by Yenibademli Village. The part between Yıldızkoy and Yelkenkaya has been announced as the Underwater National Park by the Turkish Marine Search Foundation (TUDAV) because of its underwater beauties. This park is the first and only Underwater National Park in Turkey.

It is the village where citizens from Isparta province and fishing families, that were brought from the Black Sea Region, are settled. It is one of the biggest villages in terms of population density on the island. Its distance from the district center is 4 kilometers. The people of the village earn their keep with husbandry, agriculture and fishery. Hostels and guesthouses are common in this village.

Yenibademli Mound has the title of the first systematic archaeological excavation of Imbros. Located in the Kaleköy region, the mound is 3 kilometers away from the district center. The middle-size mound is 18 meters high from the sea level and 9 meters from the field. It is understood, thanks to findings found in the mound with the excavation works conducted by archaeology students under the presidency of Assoc. Prof. Dr. Halime Hüryılmaz, an academic at the Archaeology Department of Hacettepe University, and people of the island since 1996 with the permission of the Ministry of Culture and Tourism General Directorate of Monuments and Museums, that the settlement in the mound dates back to the Early and Late Bronze Age, some 5,000 years ago.

This village is 4 kilometers away from the district center. The architectural houses of the village are worth seeing. The laundry and old primary school buildings should also definitely be visited. The century-old sycamore is remarkable. You can also enjoy the sunset here, as well.

The district center comprises of five neighborhoods, particularly Çınarlı, Cumhuriyet, Fatih and Kuzulimanı. There are examples of old settlements in these five neighborhoods. All government agencies and shopping places are in the center. The Merkez Mosque in Çınarlı Neighborhood, which features the examples of the Ottoman architecture, and Fatih Mosque, which is the biggest one among the three mosques in the district center, are important destinations. There are also two churches which are located in Yenimahalle and Fatih Neighborhood.

Zeytinli Village is three kilometers away from the district center. Situated on a hillside among olive trees, the cute village is generally home to citizens of Greek origin. It is one of the most visited places on the island. You can drink Dibek coffee, indigenous to the island and famous everywhere in Turkey.

Tepeköy is 10 kilometers away from the district center. It is the village which is located at the highest point of the village. The population of Greek citizens is intense here. The village is flooded by Greeks from the four corners of the world in order to celebrate Virgin Mary events, which are organized in August every year. Another place that can be visited in Tepeköy is Pınarbaşı, known as İspilya. You can visit Pınarbaşı from the road which goes to the right before the entrance of the village. There are nice places to have a picnic here. The flowing natural water and century-old sycamores which are under the protection add a different beauty to this place. For those who want to escape from the suffocating hot weather of the summer months, the place is a perfectly cool place.

It is one of the picnic areas on the island. You can spend time here under the sycamores accompanied with the water which flows through the fountain in summer and winter months with your family. It is nearly 22 kilometers from the district center. After the pond of the dam is passed, follow the road that goes to Kapıkaya. You will find Karayolları Çeşmesi there. Located on the right side of the road, the place presents a beautiful scene with forests comprised of olive and other trees.

Şahinkaya is the village where the citizens from Çaykara district in Trabzon province are settled. Located 16 kilometers away from the district center, the village is the place of husbandry, agriculture and beekeeping.

There is a dairy farm which is established by the people of the village and animal production is performed here.

Dereköy is one of the oldest villages of the island. The village, which is 16.5 kilometers away from the district center, was the biggest village according to population and house numbers in Turkey in the 1950s-60s. It has nearly 600 houses.

Drawing attention with its desolateness and empty buildings, it has a historical laundry

house that should be visited.

The distance between the district center and Uğurlu village is 25 kilometers. Citizens from Muğla and Burdur province are settled here. Agriculture, husbandry and hostels are the primary means of living in the village. The educational and social rest establishments of the Ministry of National Education, Ministry of Health and Ministry of Justice are located in this village. You can go to Gizli Liman, which is the most natural and broad beach on the island, by passing this village. It is possible to reach Uğurlu through the right road before the pier. The coastline is nearly 1.5 kilometers long. It is totally untouched and there is no construction.

Şirinköy is the village where people who migrated from Bulgaria settled. In the village, hostels are becoming common along with agriculture and husbandry like the other villages.

Imbros has many small and large bays because of its natural structure. One of them is Laz Bay, in the land of Şahinkaya. You can reach the bay, going to Kapıkaya from Şirinköy. With its natural structure and beauty, Laz Bay is one of the beaches where you can enjoy your time on the island.

Eşeleke Village, in Biga district of Çanakkale province, is given to Imbros, as it was in the exposure area of Bakacak Dam. It is 10 kilometers away from the district center. The people of the village deal with agriculture and husbandry. Hostels are also becoming more common. The products that are grown by village people are sold to local and foreign tourists at the booths that are placed along the road and have really good prices.

Aydıncık Beach is 13 kilometers away from the district center. It is the favorite beach on the island. It draws attention because of its close distance to Salt Lake on the island. Its coastline is nearly 2 kilometers long. Its location is also proper for camping and pitching tents. You can find camping areas here. Especially those who are interested in windsurfing should visit the beach. A surf school was opened here for surf lovers who had training on Aydıncık Beach and wanted to continue to surf professionally.

Salt Lake is situated on Aydıncık Beach. As its water dries in the summer months, black mud formations appear in the lake. This mud is good for such problems as rheumatism and osteoarthritis thanks to its chemical components. Along with these features, it also satisfies the salt needs of people, birds and other animals. It is a feeding area for many living creatures. It also hosts some migratory birds like pelicans, flamingos and mallards.

Kuzu Port is the where the ships, which provide transportation for Imbros with the mainland, approach. Therefore, it is the place where those who visit the island meet. It is the one place that welcomes the visitors first. It is also one of the favorite places on the island thanks to its beach. There are also some cafes on this beach. It is possible to play beach volleyball in summer months here.

Kaşkaval Cape is located east of Kuzulimanı. It draws attention with the interesting rock formations that resemble cheese hoops put on top of each other. It is not possible to see this place from the land. However, you can see it from the sea in a boat. It is one of the most memorable, natural places on the island. These rock formations also have a legend: The story is about an old woman who is rich, stubborn and ungenerous. This woman has numerous sheep and goats. To be able to go to heaven, the old lady made many pieces of cheese and put them on top of each other. However, she does not share them with anyone. God gets angry and punishes her. On the first day of May, he sends rain, snow and wind to the old lady. The lady and the cheese are all frozen. These frozen cheeses are the rock formations.