8 reasons to visit Side before summer ends 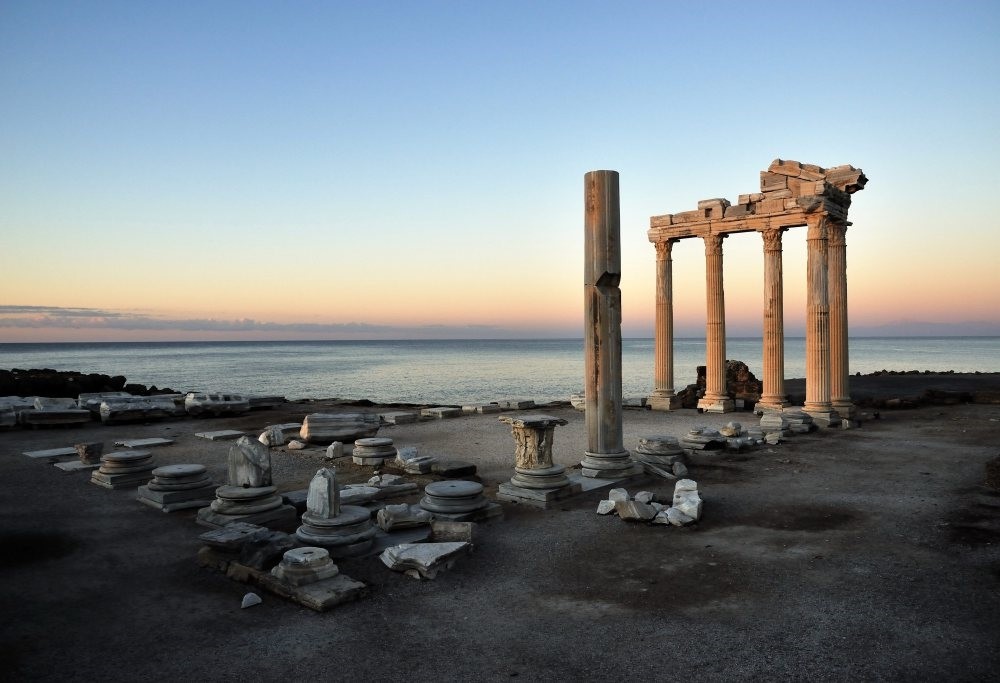 It may be September but on Turkey's coasts, September does not mean fall has started yet. It is in fact the the best time to dive into the beautiful blue seas of the Aegean and Mediterranean.

We invite you to Side, the ancient village that sits on the Mediterranean coast. Side, which means "pomegranate" in the ancient Anatolian language, lies about 75 kilometers east of Antalya, a popular travel destinations for both domestic and local tourists.

There is no need to mention the beauty of Side's beaches and clean sea as it is the signature of every seaside town on Turkey's Mediterranean coast. But what makes Side stand out from the other resort towns is its Roman and Hellenistic ruins that lure visitors to step into the ancient worlds and natural wonders. Here are eight reasons to visit Side before the summer ends:

Originally built by the Romans in the beginning of 4th century B.C., the bridge collapsed many times due to earthquakes, it was rebuilt by the Seljuks in the 13th century and restored during the republican times. Today the 225 meters long village is closed to car traffic and protected as a historical monument for visitors to see.

Records show that Aspendos' history goes back as far as 1,000 BC and flourishing in the 5th century BC, where it became a center of trade and industry with its abundance of oil, wool, and salt. And just like every rising town of the antiquity, Aspendos had its own theater.

Able to host 20,000 people at once, the ancient theater of Side was built in the 2nd century B.C. to entertain the locals of Aspendos. The theater is still in good shape and hosts the annual Aspendos International Opera and Ballet Festival organized by Turkish State Opera and Ballet since 1994, with international participation of opera and ballet companies.

What makes the Roman Theater in Antalya so magnificent is its spellbinding height of 315 feet. The theater is so massive that tourists visiting feel engulfed by its splendor. You will also find remains of ancient basilicas, Roman aqueducts and other splendid architecture on site.

Apollo and Athena were Aspendos' deities, although Apollo eventually became more important. The Temple of Athena dates from the 2nd century B.C., and a half-dozen columns have been placed upright in their original spots. For those who are looking for a romantic stroll among the ancient ruins, the temples of Apollo and Athena are top choices.

If you are interested in history, Side museum is a must see place if you happen to be in southern Turkey. Erected within a Roman public bath, the museum has an collection of statues, sarcophagi, reliefs and coins.

The word Agora is Greek for "open place of assembly" and, early in the history of Greece, designated the area in the city where free-born citizens could gather to hear civic announcements, muster for military campaigns or discuss politics. An in any agora, you can find a public bath and Aspendos is no different. Currently used as part of Side Museum, the ruins of Agora bath can still be seen and discovered by history enthusiasts.

Putting aside Side's rich history, its natural wonders are also worth your time, starting from the Manavgat Waterfall. Located 3 kilometers from the Manavgat village, the waterfall is a great option to spend a relaxing day. Near the waterfall there are tea gardens, a fish restaurant, recreational areas and souvenir shops. It is also possible to take a boat trip up the Manavgat River to explore this lovely area further.

There are no words to describe the beauty of Turkey's Mediterranean coasts. If you want to experience the last few rays of the summer sun on the beaches, Side's numerous public and private beaches are here to serve you.

If you want to have an exotic coastal experience, you are welcomed to visit Titreyen Göl (Shivering Lake) and stay at the nearby hotels where you can enjoy gorgeous views. The lake is seen as though it is "shivering" as the hot wind around it creates an illusion in the lake's water similar to shivering. The lake is home to numerous bird species.