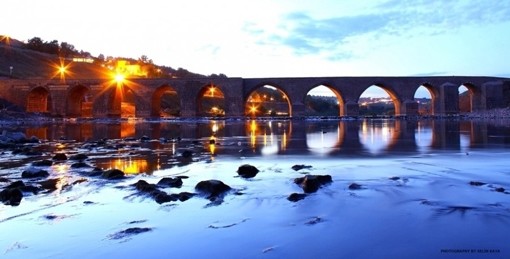 Turkey's Diyarbakır, located in southeast Anatolia, has won the Golden Apple Award, presented by the World Federation of Travel Journalists and Writers (FIJET).

Founded by the French and Belgian travel journalists' and writers' associations, FIJET has presented the Golden Apple every year since 1970. This award for excellence is presented each year to an organization, country, city or person in recognition of superior efforts in promoting and raising the level of tourism.

Diyarbakır was given this prestigious prize thanks to its historic and touristic values, the hospitality of its locals and the efforts by the private sector and NGOs to increase tourist activities in the city.

Surrounded by city walls, the second longest in the world after the Great Wall of China, Diyarbakır, situated along the banks of the Tigris, with settlements in the area going back 9,000 years, is a treasure trove of history. Located on an escarpment of the Upper Tigris Basin part of the Fertile Crescent, the city has been an important center since the Hellenistic period, through to the Roman, Sassanid, Byzantine, Islamic and Ottoman periods to the present day.

The rare and impressive Diyarbakır Fortress and the 7,000-year-old, 700-hectare lush green fields of Hevsel Gardens are recognized by UNESCO as World Heritage sites.