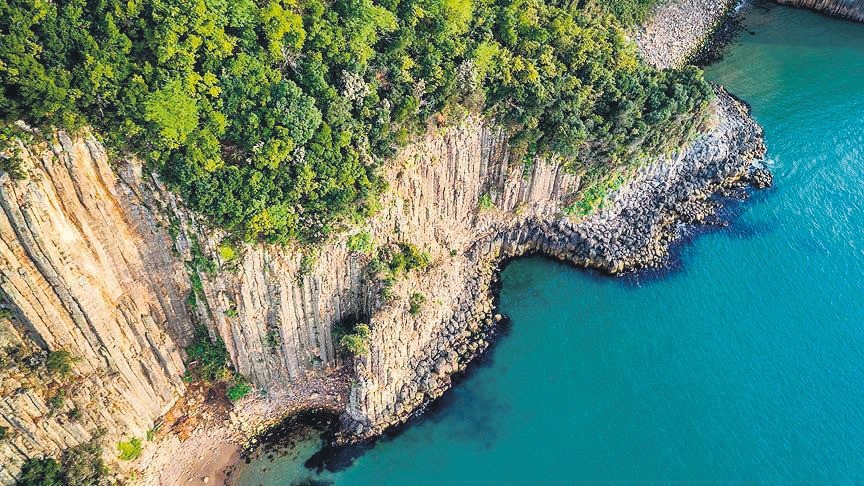 Rare basalt columns in northern Turkey have become one of the most popular tourist destinations since it was opened for tourism earlier this year.

Around 40,000 people visited the 80-million-year-old site in Bartın province in the first four months following the official opening, according to a local tourism official.

In Bartın's Güzelcehisar beach on the Black Sea coast, the columns were formed when lava flowed from volcanos and crystalized as it cooled, providing a stunning landscape with geometric columns. The columns turn the area - around 17 kilometers (10.5 miles) away from the city center - into "a wonder of nature," Fuat Dursun, the provincial director of culture and tourism, told Anadolu Agency (AA).

"The biggest feature is having 80-million-year-old basalt columns. Lava flowing from volcanos crinkled and formed fracture patterns. Thus, pentagonal and hexagonal-shaped columns were formed," he said.

Highlighting that the formations in Güzelcehisar were different than the other examples in the world, Dursun added, "Basalt columns in the world are horizontal, our columns are both horizontal and vertical."

For this reason, authorities wanted to open the area for tourism as well as to provide income for the local people under a project carried out together with Bartın University, he noted.

Citing the significant number of visitors, Dursun said, "Our goal is to increase the number to 100,000-200,000, to open the basalt columns for international tourism and to make it a focus of interest for domestic and foreign tourists."

Restaurants, cafes and bungalow houses are going to be built around the wooden walking trails as part of the project.

Basalt columns are seen in Northern Ireland, Scotland and California in the world, while they are only seen in Bartın in Turkey, according to the local official.

The area was designated as a natural monument by the Turkish Agriculture and Forestry Ministry in 2017.