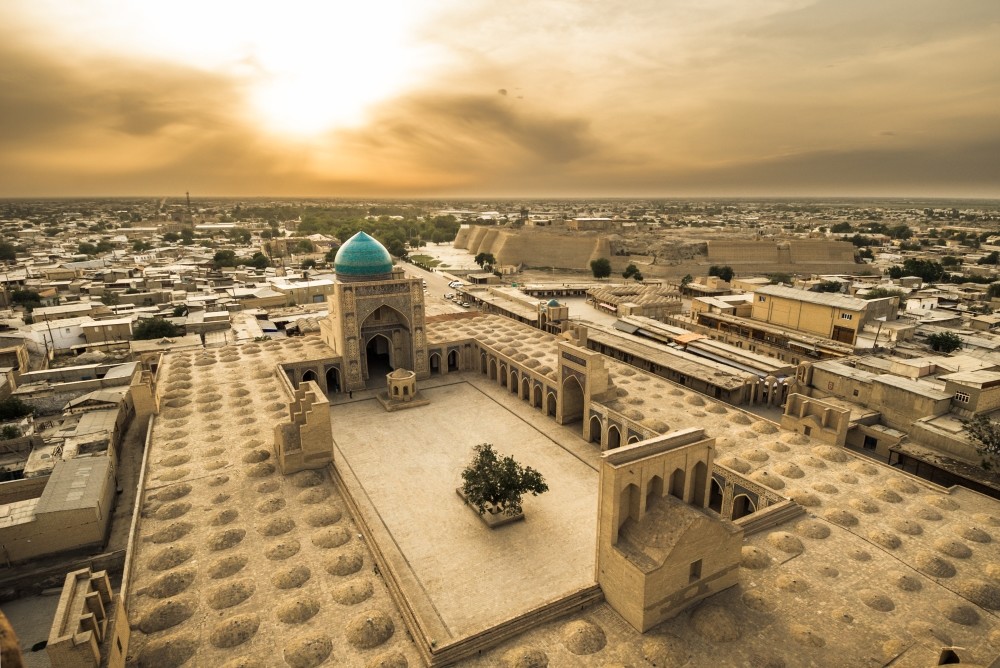 Poi Kalyan Square, which means ,At the Foot of the Great,, is the heart of Bukhara where Poi Kalyan Mosque is also located.
by Anadolu Agency Dec 15, 2018 12:00 am

Located in a large oasis in the Zarafshan River basin, Bukhara fascinates visitors with its deep-rooted history as well as its spiritual atmosphere. As you walk through the streets of the city that carry the traces of the past, it is possible to come across a precious piece of Islamic history and culture.

Like many other cities of Uzbekistan, Bukhara features the most beautiful examples of Turkish-Islamic architecture with its magnificent mosques, high minarets, caravanserais (iconic roadside inns) with different shades of blue, and madrasahs covered with tiles. In the city, some madrasahs, which have trained the clergy for centuries, continue to perform this task today. Having served as a home to important trade routes through which caravans passed for centuries, Bukhara is one of the most ancient cities where societies from different religions intersect. It is known that the historical past of the city, which was home to the Zoroastrians, Buddhists, Christians, Jews and Muslims in various periods, dates back more than 2,500 years, while its first human settlements were established way before that.

Bukhara, which is said to be derived from the word "vihara" which means "castle" and "temple," was one of the political and cultural centers for many Turkish states throughout history.

The city was the capital of the Bukhara Khanate, which was one of the three largest khanates ruling the territory of Uzbekistan from 1599 to 1920. Having served as the capital of this khanate until the beginning of the 20th century, Bukhara suffered great destruction during the Soviet occupation of 1920 and many historical buildings were damaged.

One of the three cities with the title 'Domes of Islam'

In addition to its deep-rooted history, many scholars, poets, scientists and statesmen of Bukhara, one of the important centers of science and art, left behind an assortment of valuable works.

The city attracts the attention of Western tourists due to the fact that it is the birthplace of Ibn Sina, who laid the cornerstone for modern medicine and wrote many books in various fields such as medicine, physics and philosophy. In addition to Ibn Sina, known as "Avicenna" in the West, Bukhara was home to the lands where Imam Bukhari, one of the most important Islamic scholars. Bukhara, one of the three cities in the world with the title of "Domes of Islam," has a very important place in Turkish-Islamic civilization.

There are dozens of magnificent structures to be seen in Bukhara, one of the very few cities that have managed to preserve its scientific and historical fabric.

Ark (Castle) is one of the oldest architectural structures in the city. It stands out with its fine workmanship and huge walls. After entering through the main gate of the castle, you can see iron bars that held the prisoners on the right and left sides.

In the castle, which is also known as the Khan Palace, is where state officials and servants lived, there are also sections such as the emir's summer room, a mosque, a chamber of the state treasury, a harem and a dungeon.

The immersive workmanship on the wooden doors within the castle, used as both the emir's palace and the headquarters throughout history, is quite astonishing.

One of the most important symbols of Bukhara, the Kelan (Great) Minaret, attracts the attention of local and foreign tourists. It is the highest building in the city at about 47 meters high. It has different patterns in each section and is called "Kelan Minaret" in colloquial terms. Some parts of the structure, which is one of the most magnificent and highest minarets in Central Asia, are ornamented with turquoise tiles, while the middle part of the minaret was decorated with kufic writing. According to legends, a fire would be lit at the top of the minaret at night so that the caravans coming to the city could easily find their way.

The Lab-i Hawz complex located in the center of the city is one of the most important places to see in Bukhara. Inside this complex, there is a madrasah, a mosque, while the pool features a statue of Nasreddin Hodja in the middle. The place known as Lab-i Hawz served as one of the most important stops of caravans throughout history. At the entrance gate of the Nadir Divan Bey Madrasah, one of the madrasahs within the complex, animal and sun figures stand out as well as verses from the Holy Quran.

According to legends Vizier Nadir Divan Bey had a caravanserai built here in 1619-1620. Later, when Nadir Divan Bey completed the construction of the caravanserai, he invited Khan to show this beautiful work. Upon seeing the structure, Han likened it to a madrasah and the vizier instructed the masters to make the ornaments look like decorations in a madrasah.

In the shops in the madrasah, Uzbek people perform the craft of traditional ironworking and exhibit the best examples of their craftsmanship.

Meanwhile, there are many nice restaurants around the complex and shops selling colorful local souvenirs. In these restaurants where you can enjoy Uzbek cuisine while listening to Uzbek songs, the prices are also very reasonable.

While walking around the Lab-i Hawz, the motifs used in line with the Central Asian culture in the interior and exterior of the buildings away from the influence of modernism also contributed to the preservation of the historical texture of the city.

Bukhara SynagogueIt is possible to come across 400-year-old synagogue while wandering through the narrow streets of Bukhara, which has hosted different cultures and beliefs throughout history.

In the middle of the synagogue, located in the quarter where a few Jewish families live today, there is a courtyard, seating places on both sides of the courtyard, a Hanukkah, photos of rabbis and very old Torahs.

Different sources suggest that Jews living here came to Central Asia thousands of years ago. Even though most of the members of this Jewish community later dispersed all around the world, a small number of people still live in Uzbekistan and call it their home.

Besides the synagogue, there is also a Jewish school in the city.

How to reach Bukhara

You can reach the historical city of Bukhara from capital Tashkent using Uzbekistan Airlines flights and also by high-speed train from Samarkand.

During the train journey which takes about three-and-a-half hours, it is possible to meet many tourists coming from different countries to visit this ancient city where the hotel fee varies between $30 and $60. It is also possible for a person to enjoy a meal for $2 to $3. Uzbekistan, one of the more promising countries for tourism in Central Asia, specified tourism as a "strategic sector" after 2016 and has been drawing attention with its investments in this field ever since.

According to reports, direct flights to Bukhara from different cities of Turkey may be launched soon.