From hot springs to ski slopes, Bursa a perfect destination for winter holidays 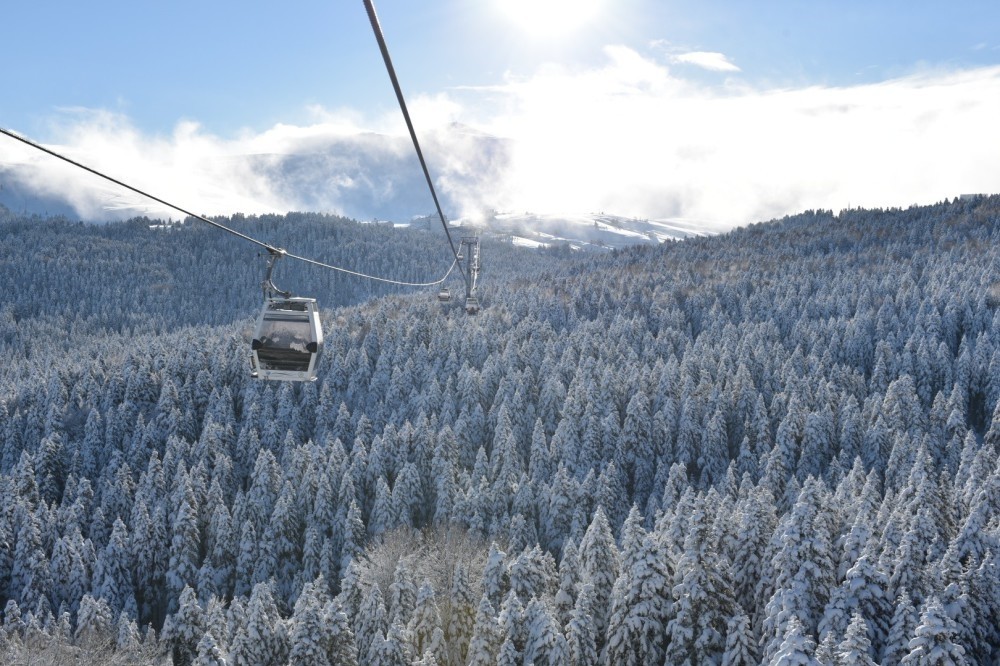 Once the capital of the Ottoman Empire, Turkey's northwestern Bursa province is a perfect winter getaway destination with its leading winter tourism center of Uludağ and hot springs.

Holidaymakers travelling to Bursa, one of the most preferred winter tourism destinations of Turkey, can enjoy the hot springs, believed to cure various diseases. In addition to its natural wonders, Bursa is home to numerous Turkish culinary delicacies.

The Mount Uludağ area has a bed capacity of 7,000 and contains 20 ski slopes ranging from 300 to 980 meters long, making it a leading tourist destination in the winter season.

Cable cars are one of the most popular transport means to Uludağ, which is some 40 from the city center. Visitors can snowboard and ski down the slopes and ride on ice sleds and snow bikes.

Featuring examples of 700-year-old Ottoman architecture, the unspoilt village of Cumalıkızık takes you centuries back with its narrow streets and colorful houses.

Tourists have the chance of tasting the village breakfast, comprised of organic indigenous delicacies.

Dating back seven centuries, the Bursa Covered Bazaar was one of the first markets of the Ottoman era and is still a popular center of commerce in the city.

Both the village and the bazaar are included in UNESCO's World Heritage List.

Those who want to enjoy traditional Turkish cuisine can choose from a variety of local meals, including İnegöl meatballs and meatballs on pide, locally known as cantik. Silk and towels, Iznik pottery, Kemal Pasha Desert, olives and olive oil are among the province's most popular products for tourists.

The hot springs are also important and popular attractions in the area.

Historical sources indicate that thermal treatment in these springs was used long before the Ottomans arrived in the region; the Roman Empire would dispatch wounded or worn out soldiers for medical purposes to these sites.

Murat Saraçoğlu, a senior official in the Association of Turkey Travel Agents (TURSAB), told Anadolu Agency (AA) that the historical city attracted many tourists from a variety of regions.

Bursa is a rare example of a destination where holidaymakers can enjoy skiing and hot springs tourism simultaneously, he added, highlighting that Uludağ is a winter tourism center recognized both locally and internationally.

"There are many foreign tourists who enjoy the hot springs. A tourist could find themselves skiing, just an hour after having bathed in the hot spring," he said.

İbrahim Calp, a holidaymaker, described Uludağ as a "white paradise," noting that everyone should visit the area to enjoy skiing and snowboarding.

Ramazan Akın, a tourist from Germany, said he was looking forward to relaxing in the hot springs.

"This is one of the most beautiful parts of the country and was the capital of the Ottoman Empire. We can feel both cold and hot here. This makes it possible to enjoy four seasons in one day. I recommend that everyone visit this site," he added.