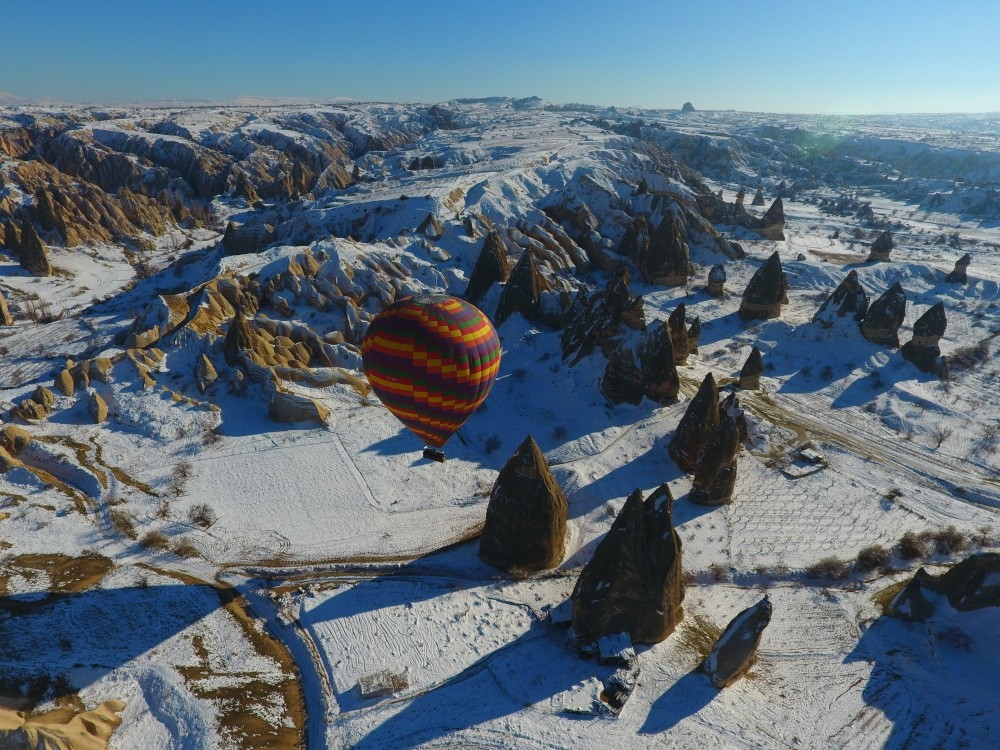 Mt. Erciyes and Cappadocia offer different types of holiday entertainment for the adventure seekers.
by Anadolu Agency Jan 05, 2019 12:00 am

Tourist hot spot Cappadocia is a winter paradise. Guests can go on a hot air baloon tour in the land of fairy chimneys, ski at Mount Erciyes or relax at the Kozaklı Thermal Springs

Cappadocia, which is widely known as a favorite of tourists, is ready for guests who want to enjoy skiing, thermal springs and hot air balloon rides during the winter break.

Visitors can start the day with a breathtaking balloon tour over the famous fairy chimneys, spend the rest of the day skiing on Mount Erciyes and in the evening, enjoy thermal springs in the Kozaklı district.

Sunrise hot air balloon rides offer bird's eye views of the stunning landscape and authentic atmosphere, comprised of fairy chimneys and valleys featuring natural rock formations. After the balloon ride and just an hour away, tourists have can enjoy the ski center at Erciyes Mountain.

Vacationers who enjoyed skiing in Erciyes Ski Center during the day can also relax and end their day in the thermal spring waters in Nevşehir's Kozakli, which is also only an hour away.

The Cappadocia-Erciyes-Kozaklı experience is the perfect combination for an unforgettable holiday.

Cappadocia, which lies in central Anatolia's Nevşehir province, is a favorite of tourists in Turkey with its rock-carved structures, natural beauty covered with fairy chimneys, historical riches and cultural value. The region offers tourism activities year-round.

The authentic atmosphere of the region can be viewed from above with hot air balloon tours, which have become one of the symbols of the region, visited by local people and hundreds of thousands of foreign tourists every year. The balloon rides start from 150 euros ($172) per person, while horse rides and ATV tours cost TL 100 ($18.50) per person. Visitors can also ride horses or camels or rent ATVs to explore the volcanic cones, while hiking among the valleys is also a unique experience.

Accommodation is available for every kind of budget and offers some of the best value in the region. The tourists can also stay in cave rooms in boutique hotels built into the volcanic tuff rocks.

Those who want to spend their winter break in Cappadocia can also visit Göreme Open-Air Museum, Zelve and the Paşabağı archaeological site and earthenware workshops in the Avanos district. The underground cities of Derinkuyu and Kaymakli are also options for visitors who want to travel back in time.

Only an hour drive away from Cappadocia, Mount Erciyes awaits tourists with its majestic view.

Erciyes Ski Center, which has been brought up to international standards with the Erciyes Master Plan carried out by the Kayseri Metropolitan Municipality with an investment of nearly 350 million euros, has become one of the must-see places in winter.

Drawing more attention each passing day thanks to its location near Cappadocia, accessibility, the length of its ski track, mechanical facilities, professional administration and its budget-friendly policies, Mount Erciyes has become a favorite for those who want to spend a holiday in mountain weather saturated with clean, fresh air. 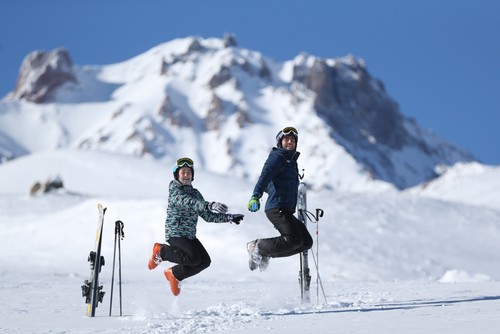 The ski center, which sits on a nearly 25-kilometer-square area, with its modern chairlifts and latest technology cable car system allows tourists to enjoy skiing in different spots with its 18 mechanical facility networks which are 21,300 meters in length and can carry 25,500 people per hour.

As the leader in Turkey with 34 slopes stretching a total of 102 kilometers, it provides opportunities for both amateur and professional skiers with slopes on Tekir, Hacılar, Hisarcık and Develi gates.

In Erciyes, where all the slopes converge, skiers start at 2,200 and 3,400 meters on slopes of different difficulties: black, red and blue.

Tourists who come to enjoy skiing in Erciyes can also visit the Castle of Kayseri and madrasahs dating back to the Seljuks in the city center. They can witness the glory of Kapuzbaşı Waterfall and beautiful migratory birds in Sultansazlığı. They can also buy pastrami and sucuk, a kind of traditional sausage, the city's most well-known treats.

Also an hour away from Mount Erciyes, Kozaklı district offers a healthy way to spend the holidays in Turkey. The district's thermal springs are one of the most important thermal tourism centers in Turkey.

Konaklı is ready to host guests for winter break with a capacity of nearly 10,000 beds and 22 thermal facilities.

Those who want to benefit from Kozaklı's springs, which contain the healing water groups A and C thanks to its sodium, calcium and chlorine, can stay in apartments, motels or five-star hotels as well as in facilities run by the municipality.

Kozaklı also has dozens of pools and aqua parks that provide activities for children and youth. Salt rooms, spas, mud baths, Turkish baths and beauty-fitness centers are also among the many options at the thermal facilities.

It is believed that the healing water of the district, which contains radon gas, known to accelerate cell regeneration and described as the "elixir of youth," has positive effects on rheumatic and psychological diseases, anemia, gout, kidney function, urinary tract health, musculoskeletal pains, digestion, gallbladder function, skin and cardiovascular disorders, arthritis, postoperative cell regeneration and is known to strengthen hair and nails.

Visitors can benefit from the facility for between TL 50 and TL 170 per person.

Explaining that Erciyes is not just a tourism center alone, İkiler said: "While this investment was being made, creating a tourist destination in the Cappadocia region and the Kozaklı thermal hotels were part of the plan. This project has been very successful. We host both local and foreign guests here. Our guests can enjoy the uniqueness of Cappadocia by taking a hot air balloon ride in the morning and then they come to Erciyes with an approximately one-hour car ride and enjoy skiing on our 102-kilometers of slopes. They, later, can end the day in Kozaklı's thermal facilities with another short one-hour journey."