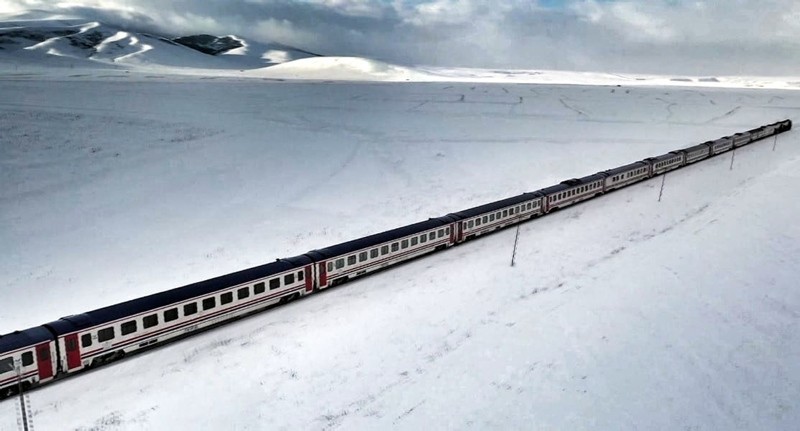 New aerial photos of the Eastern Express have given a fresh look at the snow-blanketed route the train transverses across eastern Turkey.

A drone recently snapped photos during the Eastern Express' 24-hour trip from the capital Ankara to eastern Kars, capturing its route on winding mountain paths, through narrow tunnels and over lonely bridges.

The train ride, one of Turkey's longest, has attracted the attention of local and foreign tourists alike, especially among young people, growing in interest as passengers share their experiences on social media.

Photographers and videographers are frequent passengers, as the experience provides a wealth of landscapes and vistas, especially during wintertime. For those seeking to be dazzled by a winter wonderland, January and February are ideal times for travel.

At the end of the trip, passengers stretch their legs – or take a sleigh ride – at the frozen Çıldır Lake in Kars, another famous photo-op.

Ticket prices range from 48 to 188 Turkish liras, depending on a choice of economy seats, sleeper car or a more luxurious two-person private cabins equipped with a table, sink and refrigerator. Tickets are discounted for passengers aged 13-26, and for teachers, military personnel, seniors and groups larger than 12.