Searching the soul of the city: Get a taste of Istanbul with Sultanahmet tour 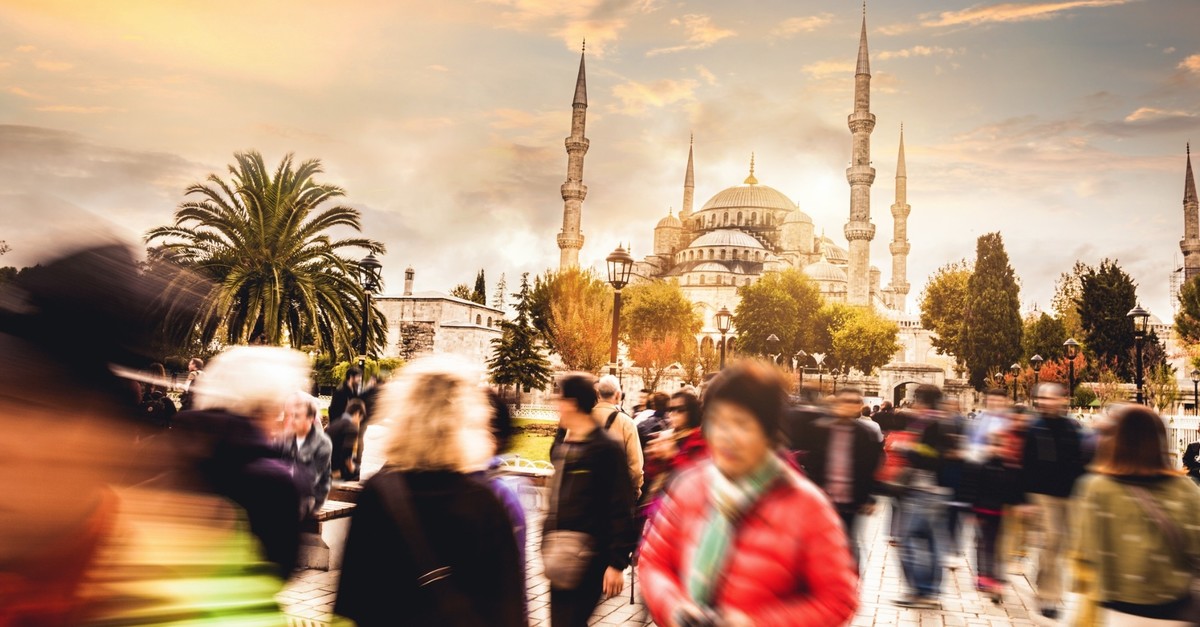 If you don't have a lot of time to spare in Istanbul, but want to know what makes the city a tourist hotspot, head to the historical Sultanahmet district to set some insight into the civilizations that made the city what it is roday

Istanbul is a dazzling city that is so rich in history and culture that one might feel dizzy trying to see and try everything this ancient city offers. If you visit the city for business or are a transit passenger with an extended layover, it is not possible to see all of Istanbul, where East meets West.

Don't despair. In limited time, you can still get the essence of Istanbul, visiting historical landmarks built by the empires that once ruled. Istanbul's historic peninsula has a perfect concentration of historic sights, shopping centers, hotels and eateries within walking distance. In Sultanahmet, one can find everything to understand the soul of the city in just three hours.

First: In Sultanahmet, built over the ancient Hippodrome of the Byzantine Empire, purchase a MüzeKart (museum card), enabling entry to over 300 attractions managed by the Turkish Ministry of Culture and Tourism in Istanbul and Turkey and to avoid long lines. Buy the MüzeKart at the Istanbul Archaeology Museum, Hagia Sophia and the Topkapı Palace in Sultanahmet for TL 70 (valid for a year).

Concentrated tour in Sultanahmet, the heart of the ancient Istanbul: 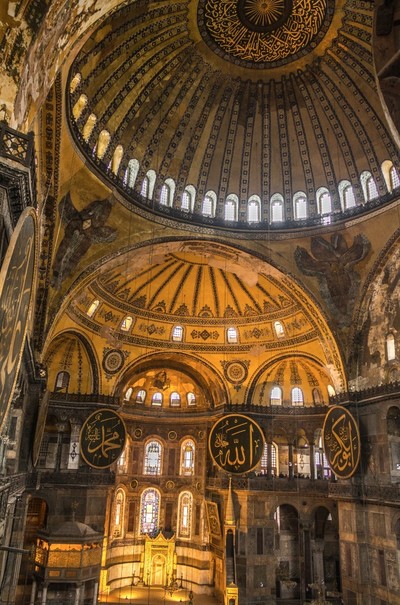 Start with Hagia Sophia, the incredible structure built as a church by the Byzantines, then turned into one of the grandest mosques in the world by the Ottomans and then converted into a museum. Commissioned by the great Byzantine Emperor Justinian, consecrated as a church in 537, the domed structure of Hagia Sophia still mesmerize visitors in the 21st century. Step into the building: A mosaic called "Christ as Pantocrator" located above the imperial door welcomes you. The ground floor of the Hagia Sophia is the perfect combination of Christianity and Islam. The mosaics, some of which only visible in remains, tells visitors about Christianity, while the minber (pulpit), mihrab (prayer niche indicating the direction of Mecca) and the great rounded calligraphic panes on the walls, written by Kadıasker calligraphist Mustafa İzzet Efendi in the 19th century, open the door to Islam. Hagia Sophia's upper galleries are adorned with Byzantine mosaics dating back to the 10th to 12th centuries.

This building is important not just for Istanbul but also to the entire world. Built in only six years, Hagia Sophia (holy wisdom) represents the one-time grandeur of the Eastern Roman Empire (the Byzantine Empire). The structure of the building resembled nothing that had been constructed before, turning the cathedral into the embodiment of a divine intervention in the Christian world. The cathedral was such an important part of the city, that once Ottoman Sultan Mehmed II conquered it, he immediately converted the building into a mosque by commissioning minarets to be built and ordered his masters to renovate the building to preserve its magnificence.

"What a dome, that vies in rank with the nine spheres of heaven! In this work a perfect master has displayed the whole of the architectural science," wrote Ottoman historian Tursun Bey in the 15th century. And even after all these centuries, Hagia Sophia continues to takes our breath away.

Leaving the grandeur of Hagia Sophia behind, I headed to the Blue Mosque (Sultanahmet Cami), one of the jewels of Istanbul's skyline. Named after the blue tiles that adorn its interior in English, the Blue Mosque was built by the royal architect Sedefkar Mehmet Aga, a pupil and senior assistant of the famous architect Mimar Sinan between 1609 and 1616, during the rule of Ottoman sultan Ahmed I.As the mosque is one of the main tourist attractions in Istanbul, only worshipers are admitted through the main door; visitors must use the south door. The mosque is closed to those who will not pray. Unlike other landmarks in Sultanahmet, the entrance to the Blue Mosque is free of charge but donations are welcome. However, since it is a holy place, you must cover your bare shoulders and legs and women are asked to wear a headscarf. You can easily buy or borrow one from the mosque.

Covering the holy places, head to Topkapı Palace, the residence of Ottoman sultans after the conquest of Constantinople until they moved to the Dolmabahçe Palace in the 19th century. But be warned: Topkapı Palace is huge and if you have limited time, it is not possible to properly visit it all. Unlike European imperial palaces, Topkapı Palace is similar to a complex, consisting of various buildings gathered around a courtyard. The palace was divided by gates and different courts to ensure everyone stays close to the sultan but knows their place.

Pass through the Imperial Gate (Bab-ı Hümayun) to find yourself in the First Court (the Court of the Janissaries, the Ottoman army). The Middle Gate (Ortakapı or Bab-üs Selâm) leads to the palace's Second Court, used for the business of running the empire and home to the palace kitchens where you can see the most treasured Chinaware of the sultans. The Dîvân-ı Hümâyûn (the Imperial Council Chamber) is in the Second Court where Ottoman statesmen discussed matters of state and the sultan sometimes eavesdropped through the gold grille high in the wall.

The harem, where the imperial family resided, is an entirely different world. The harem of the Topkapı Palace has six floors but tourists are only allowed in one. The intimacy of the rooms and the dazzling ornaments strike you as you walk around these private quarters, offering insight on how the large imperial family spent its days.

The original museum building was an Ottoman place owned by İbrahim Pasha. The museum holds the finest examples of Islamic and Turkish art from the 8th to 19th centuries. Displayed in a beautiful setting supported by audio and lighting, the museum offers visitors passage to Islam's biggest capitals in the Middle East. It is fascinating to see Quran scriptures dating back centuries and the finest calligraphy completed by the most famous calligraphers. The museum also features the finest handwoven carpets from Damascus to the Aegean city of Uşak, which have been preserved for centuries. It also displays the holy relics of Islam, including "Şakal-I Şerif," hairs belonging to Prophet Muhammad's beard. In the basement, remains of the ancient hippodrome can be seen.

In Sultanahmet, there are many other places that you should see, including the Istanbul Archaeology Museum, Hürrem Sultan's Bath, the Church of Hagia Irene, Gülhane Park, the Million Stone, the German Fountain and many other landmarks. But you can't see all this history in a couple hours. So cover the major destinations in Sultanahmet and book your next flight to Istanbul to see all of the remaining magnificence you might have missed on your first visit. 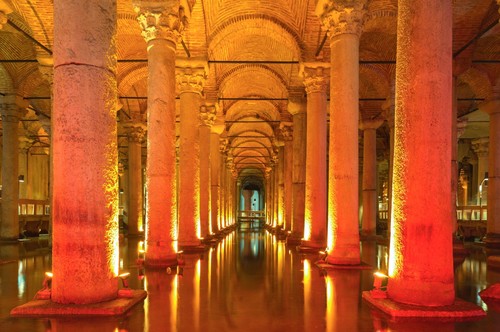 It would take almost an entire day to tour all of Topkapı Palace, but since we have limited time, make your way to the Basilica Cistern for a quick journey in time to the Byzantine Empire.

Helpful hint: Since Basilica Cistern is not managed by the Culture and Tourism Ministry, buy a separate ticket to tour this magnificent structure and see a whole underground world open up before your eyes.

Commissioned by Emperor Justinian and built in 532, the Basilica Cistern is the largest surviving Byzantine cistern with 336 columns; its symmetry and sheer grandeur are quite breathtaking. The main purpose of the cistern was to provide clean water to the palace and its surroundings and the Basilica Cistern was able to hold up to 80,000 cubic meters of water. However, towards the fall of Constantinople, the Byzantines forget about the existence of the cistern, and it was not unearthed until the 16th century.

Today, the columns and their reflection on the water captivate tourists and the lights give the entire structure a mystical atmosphere. Although the Medusa heads are quite scary, one cannot help but wonder how the Byzantines put so much effort into the details for a structure that just held clean water.