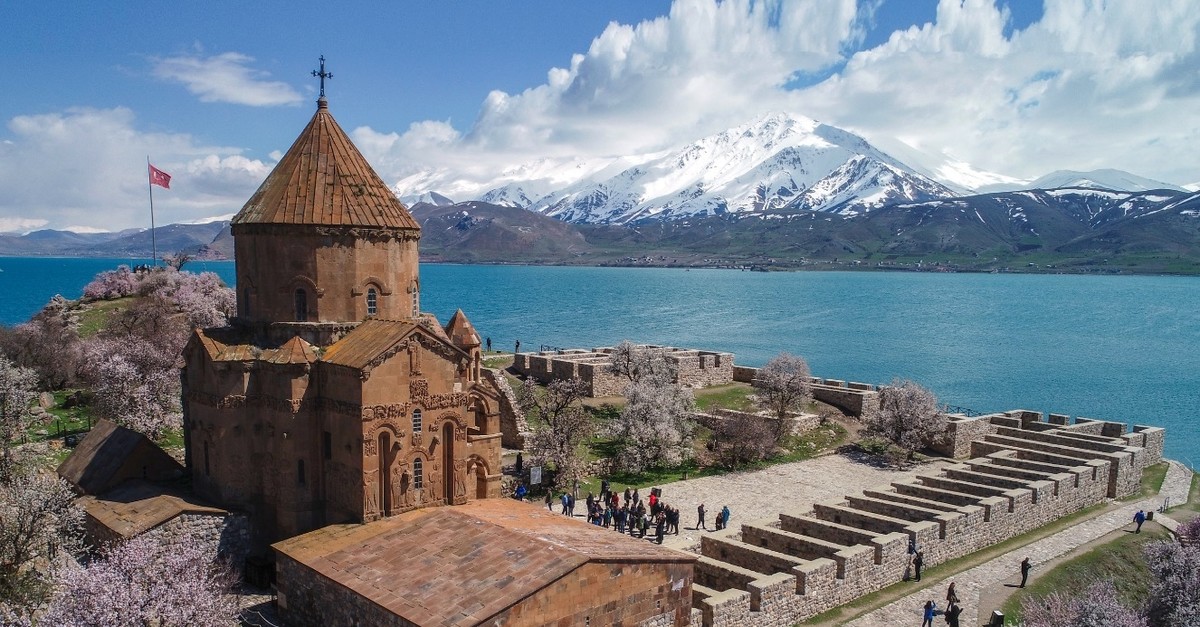 Built in the 10th century, Akdamar Church is one of the best examples of Armenian architecture.
by Daily Sabah Apr 29, 2019 12:09 am

Akdamar Island on Lake Van is one of the most popular destinations in eastern Turkey, not only because of its natural beauties in spring, but also as home to one of the best examples of Armenian architecture in the region: The Akdamar Church

There are some places the season of spring suits the most. Akdamar Island, one of the four islands on Lake Van in eastern Anatolia, is one of those places. The newly blossoming almond trees color the island in pink and white, creating an unearthly atmosphere for locals and visitors. Situated in the middle of turquoise blue Lake Van and surrounded by the snowy mountains and blossoming almond trees, Akdamar Island offers an admirable view that visitors coming to the island can't get enough of. However, the natural beauty that sprouts from the island is not why Akdamar is on the must-visit list of many people around the world. Armenian Orthodox church, Akdamar Church – also known as the Church of the Holy Cross – is the real star of the island.

The island and its surrounding provinces were once ruled by the Kingdom of Vaspurakan as a vassal of the Abbasids in the Middle Ages. In the 10th century, between 915 and 921, Armenian king Gagik I Ardzruni tasked Bishop Manuel, one of the greatest Armenian architects in history, to build a church on the island, which is believed to house a piece of the True Cross, the actual cross that Jesus Christ was crucified on.

The church is built in a style called "Hripsime Type" in reference to the Hripsime Church at Vagharshapat. It is built in a four-lobed clover-like, cross-shaped plan on volcanic tufa. As the church is built with volcanic stones that can be found in the area, it features a colorful façade. On its west wall there is a description of King Gagik presenting a model of the church to Jesus, and the Abbasid Caliph Muktadir is depicted in the middle of the east wall. Jonah thrown overboard, Mary with baby Jesus, Adam and Eve's expulsion from heaven, David's fight with Goliath, Samson killing a Philistine, three young Jewish men and Daniel in the lions' den are other prominent figurative scenes featured on the façades of the church.

What sets Akdamar Church apart from other Armenian Orthadox churches are the frescoes that decorate the interior. The frescoes depict the Story of Creation and scenes from the life of Christ. Most of the frescoes are still distinguishable, and some of them are well preserved; however, in some parts they are severely damaged. 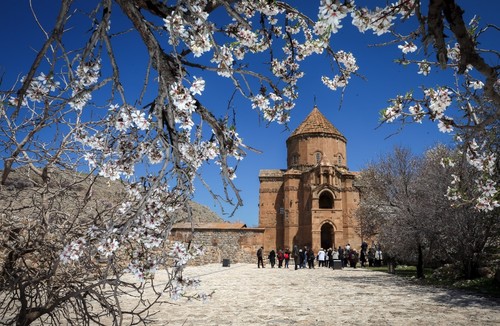 Akdamar Island and church welcome thousands of visitors during spring.

On top of its architectural features, Akdamar Church also stands out with its cultural attributions that led it to be added to UNESCO's Tentative List of World Heritage in 2015.

The building of the Akdamar Church not only a relic of the Armenian Orthodoxy and the high point of Armenian Art but also reflects the cultural diversity of eastern Anatolia and the Kingdom of Vaspurakan. The church building features frescoes depicting the scenes from both the Bible and the Old Testament and elements of Islamic art with geometrical and floral motifs.

Although the church is one of the most important religious buildings in the region, after 1915 incidents during World War I, when hundreds of thousands of Armenians and Turks were killed, the church was abandoned. Due to earthquakes and neglect, the building was almost lost to history until the Culture and Tourism Ministry began restorations of the building in 2005 and approved a TL 4 billion budget for the project, which lasted two years and included several architects, engineers and archaeologists.

Prior to the massive restoration, however, the Turkish government conducted minor restorations to make the church ready for its first service in 95 years in 2010. After the first mass, the service was held annually until 2015, stopping due to terrorist threats by the PKK. The services started once again in 2018 with the participation of Armenians from Turkey as well as Armenia and around the world and are expected to be held annually from now on.

With the increasing popularity of Turkey's famous overnight trains, the Eastern Express and Lake Van Express, eastern Anatolia has been overrun with tourists recently. Visitors touring the region's historical and touristic places rarely miss the chance to see Akdamar Island on Lake Van. Akdamar Island is especially popular with photographers in spring, when it takes on a surreal beauty with the blossoming almond trees.Zuhal Yalıç said she came from Istanbul to Van for the first time and liked Akdamar Island very much. Yalıç added: "Akdamar Island is a really magnificent place with its historical beauty and geographical location. I think it is a must-see destination. Van is a beautiful city. The historical richness and the geographical location here are truly spectacular. I wish everyone could see this place. This historical and natural beauty along with the magnificent view of almond trees are perfect."

Sema Zandalı, another visitor on the island, also said they were really impressed. "For describing the beauty of this place, I cannot find a word. I want everyone to come and see. Everywhere in our country is very nice as long as we appreciate it. I'm thinking of coming here again. I'm going to recommend seeing this place to all my family and relatives," Zandalı said.