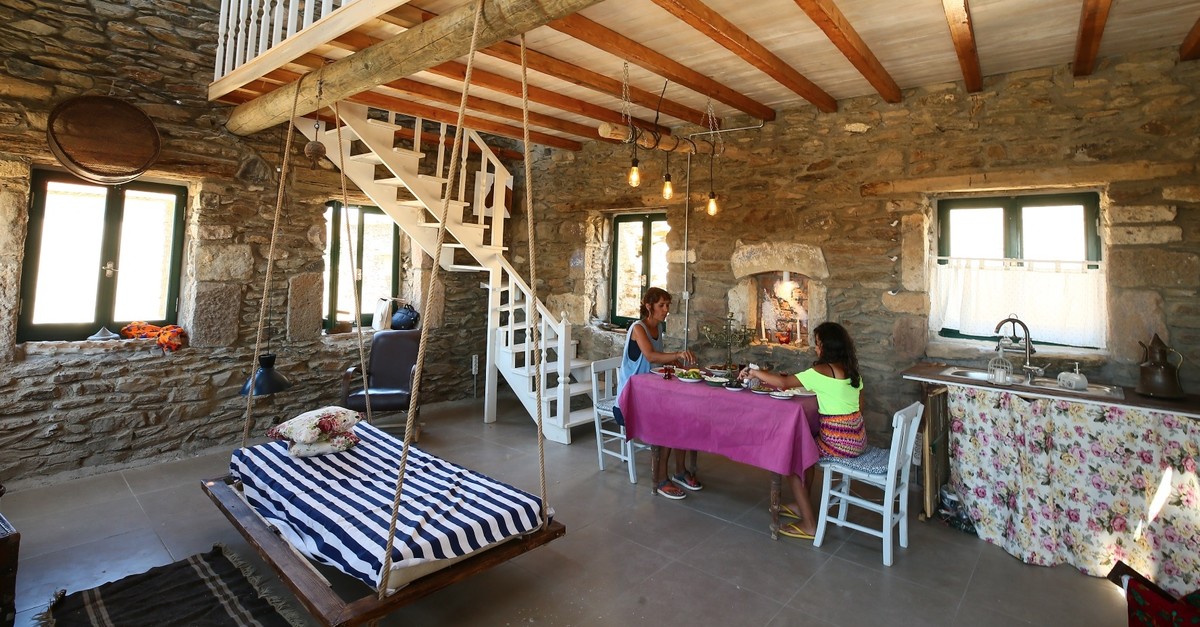 The stone houses of Aegean villages offer a break from the chaos of urban life.
by Daily Sabah with AA Aug 19, 2019 12:33 am

People living in big cities are dreaming about returning to nature and getting back to the simple way of life. Now, thanks to a new tourism trend they can do it — if even for a limited time

Crowded beaches, loud music, people splashing water and screaming at the top of their lungs are not something that everybody wants during their off time. As a consequence, modern people who have to go to work nine to six every day are changing their summer holiday habits.

For those who want to spend their holiday in peace and serenity, small Aegean villages are the most ideal destination. The stone houses, gardens with colorful flowers and a cozy place where you can have a lovely time with your friends and family lure people from across Turkey and all over the world to the Aegean region of Turkey. Villages such as Salman, Çiftlikköy, Germiyan, Birgi, Kirazlı and Kapıkırı, which were once on brink of falling into oblivion, are now hit summer destinations.

For instance, Salman village in İzmir's Karaburun was abandoned years go. But now, the village welcomes families, friends and couples from across the globe. The once abandoned village even has Wi-Fi.

The village-style holiday is very easy. You settle down in a village house and do what the villagers do every day. You work in the garden, milk the cows and enjoy perks such as organic food. Also, since you do not have time to grab your phone, you can actually spare some down time for yourself after your daily work is done. 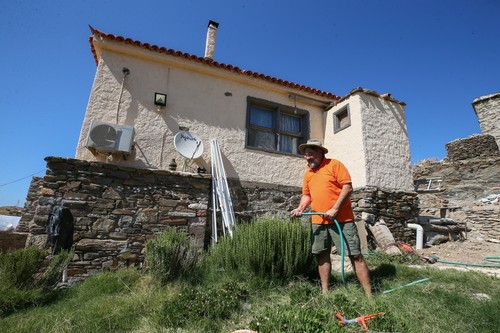 Tourists staying at the village houses may perform daily chores if they want to.

İzmir's cozy villages by the sea

İzmir's favorite resort town, Çeşme, is famous for its stone houses. Çiftlikköy is the perfect place where you can find these much-talked-about houses as well as a little bit of history and restaurants that serve the most delicious local food.

Germiyan, another village in Çeşme district, is also a popular spot for a village holiday. The village is where the Turkish nomads, Yörüks, once lived and it still bears the traces of their nomadic lifestyle. Also, Germiyan is a lovely and cozy place thanks to the murals painted all over the village by a local painter. It is also the first village in Turkey to participate in the "slow food" movement.

Located on the foothills of Bozdağ Mountain in the Ödemiş district of İzmir, Birgi is famous for its once-historic-mansion-turned-boutique-hotel vibes. It is the kind of place where you can connect with history while also enjoying nature. Kozbeyli village in the Foça district also gives the same vibes. The Turkish coffee made in this village has already made a name for itself.

Aydın is known for its organic agriculture and endemic plants but also for its resort town of Kuşadası. If you do not want to mingle with other holidaymakers and seek to find peace in nature, you can travel to Kuşadası's Kirazlı village. The village is famous for its authenticity but most importantly its local cuisine.

Kapkırı village is near the ancient city of Heraclea, right next to Lake Bafa which means you discover the region's history as well as its lifestyle at the same time. Kapıkırı is also a favorite destination of both amateur and professional photographers. A total of six houses in the village are available for holiday rentals.

Şirince, the most famous of all

Close to Ephesus and the resort town of Kuşadası, Şirince village is a place that everybody stops by at, at least once a year. It is famous for its vineyards but also for its stone houses and colorful flowers covering the facades of these lovely houses.

The village came into the spotlight when it was claimed to be one of the "last two places to stand when the world ends in 2012" according to the Mayan calendar. Well, the world has not come to an end yet but Şirince's delicious olive oil and bread still make the headlines of global newspapers.

Away from prying eyes

Mehmet Çelik was once president of the Turkish Boutique Hotels Association but then he decided to start the village holiday concept and opened up the first concept hotel in Salman village. Çelik discovered that people living in the big cities yearn for village life and decided that it was a great idea to lure urban dwellers to the villages for holidays.

For Çelik, luxurious hotels lack a soul as they all look alike. "When people are bored of big hotels, boutique hotels became popular but holidaymakers are fed up with them as well," said Çelik.

He said that there are many perks of going on a village holiday. "For instance, you get fresh air, eat organic food and most importantly touch the soil. Our visitors can even cook their own meals and milk the goats and cows themselves. There is no other feeling like drinking the water coming right from the mountain," added Çelik.