The Taj Mahal in monsoon season: A humid but superb experience 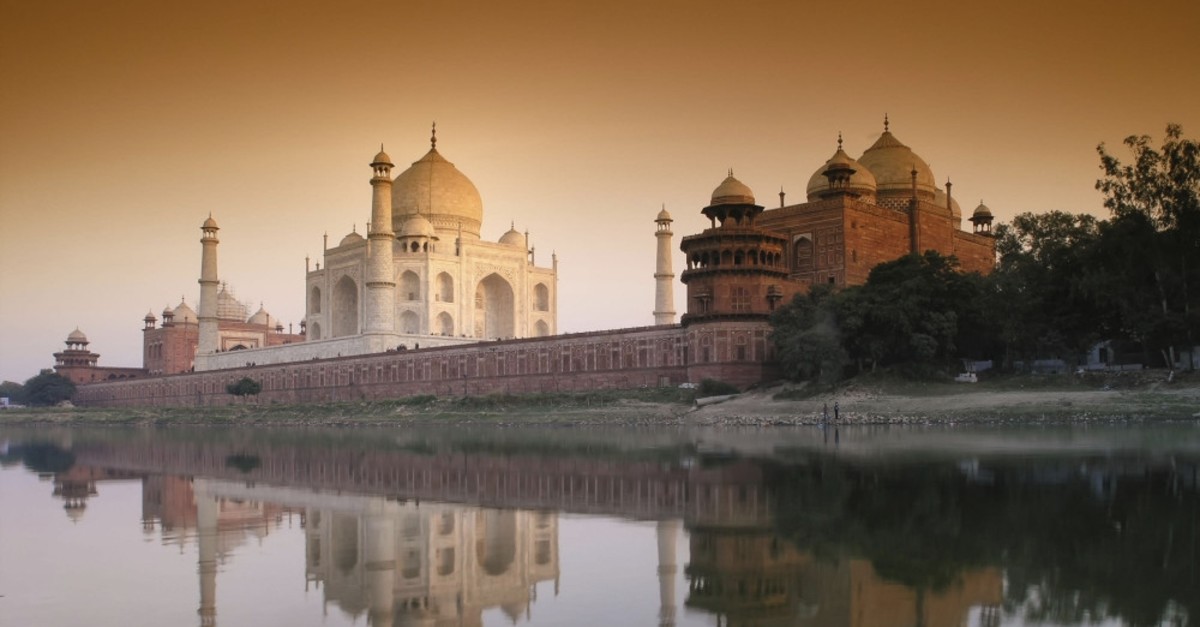 The Taj Mahal is located on the right bank of the Yamuna River and is one of the finest examples of Islamic architecture in India as well as the world.
by Miraç Tapan Sep 07, 2019 12:12 am

This is not a story how eternal love led to the construction of one of the world's wonders and most beautiful buildings. This is the story of how I was starstruck by the Taj Mahal

Last month, I had the opportunity to travel to India, thanks to the kind invitation of the Embassy of India in Ankara. My entire visit passed like a dream and I had the pleasure of having interacting with a culture that was so alien to me previously and walking around a country that possesses a kind of magic that pulls you right in.

Among all the places I have seen in New Delhi and India's "Silicon Valley" Bangalore, the trip to Agra — where one of the most recognized buildings in the world stands — was probably the dearest to me. The Taj Mahal, this jewel of the world, is one of the must-see places in India. Even in pictures, one can sense the almost magical aura of this massive marble memorial, which appears as though it is floating. I could not pass the opportunity to see it with my mortal eyes while I was there.

Agra is an almost four-hour drive from New Delhi. Traveling in an air-conditioned bus is all fun since you have pleasant time seeing different parts of the country. But when you get out of the bus, an ugly truth hits your face at this time of year: the monsoon season. 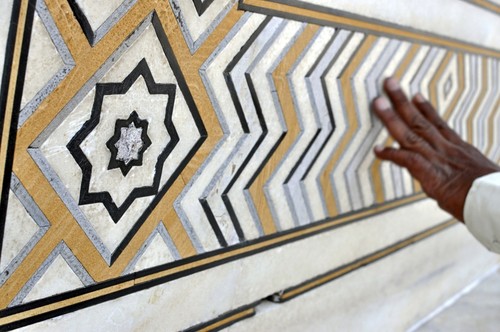 Marble inlays of the Taj Mahal were made by the members of the 200 families who still continue performing this art.

Unfortunately, during my visit to Agra and the Taj Mahal, the monsoon was still lingering in the region, which made it almost impossible to breathe. I began to sweat from the moment I stepped out of the bus but I was determined that nothing could stop me from seeing one of the most beautiful buildings in the world.

Ever since I first saw the now-classic photo of Princess Diana sitting in front of Taj Mahal and posing for the cameras with a sad expression on her face (her then-husband the Prince of Wales chose not to accompany her that day), I had the feeling that the Taj is one of the saddest places on Earth. In fact, it was built by Mughal Emperor Shah Jahan in memory of his diseased wife Mumtaz Mahal. Hence, it is a monument to love but also loss and longing.

Situated on the right bank of the Yamuna River, the Taj Mahal is encompassed by nearly 17 hectares of garden. Under the supervision of Ustad-Ahmad Lahori, the main architect of the building, the construction of the Taj started in 1632 and was completed in 1648, with the mosque, guest house and main gateway on the southern side; the outer courtyard and its cloisters were added subsequently and completed in 1653.

When one arrives to the main gate of the Taj Mahal, he or she cannot help but mesmerized by its grandeur. The gate of the Taj is more than 30 meters long and adorned with Quranic inscriptions. These inscriptions are made of black onyx stone on white marble. It is said that when the moon is full, the onyx shines as it reflects the moonlight, making the entire building even more mystical.

Since we were visiting in midday, I missed this experience but even in midday, taking a gaze at the entrance before even seeing the actual building, I was glad to have finally come to India.

WONDER OF THE WORLD

There's no mausoleum grander, no declaration of love more apparent than building a marble masterpiece for one's favorite wife and this is exactly what the Mughal emperor did in the 17th century. The Taj Mahal is simply breathtaking at first glance. I had to stand for a moment to appreciate its fine architecture, the landscape and the impressive symmetry of the place. In fact, the Taj is a perfectly symmetrical planned building, with an emphasis of bilateral symmetry along a central axis on which the main features are placed. The building material used is brick-in-lime mortar veneered with red sandstone and marble with inlay work of precious and semiprecious stones.

After my initial shock wore off, I finally stepped onto the balcony where the famous photos of the Taj Mahal are taken. Well, let me tell you one thing, taking those photos are not an easy task as the balcony, as well as the garden, is swarming with people despite the fact that August is not the peak tourist season.

Looking from afar, the Taj is surely the grandest building that I have ever seen. The white marble shines under the hot Indian sun and turns the building almost transparent; it was as if you could see the other side if you pushed yourself hard enough. It's true that the tomb, mosque, guest house, main gate and overall Taj Mahal complex have maintained the conditions of authenticity. Although a significant number of repairs and conservation work have been carried out right from the British period in India, these clearly have not compromised the original qualities of the buildings.

Though the exterior of the Taj Mahal is dashing, the interior is as humble as it can be. The marble work is exquisite but there is no lavish atmosphere inside. We were not able to see the basement where the tomb of Mumtaz Mahal is located. However, being inside the Taj Mahal was as unique an experience as it can be.

Although the Taj Mahal looks like a giant building of white marble, it actually features numerous detailed ornaments carved on the marble and filled with precious and semiprecious stones. The Taj Mahal is surely the jewel of Muslim art in India and one of the universally admired masterpieces of the world's heritage. To create such detailed work, the most skilled architects, inlay craftsmen, calligraphers, stone-carvers and masons were called from all across India and lands as distant as Persia and Turkey. To get more detailed information on how the marble inlay work was done at the Taj, we went to a marble shop just outside the building. There, we met some of the descendants of the marble masters who built and ornamented the Taj Mahal in the 17th century. We were informed that 200 men from different families worked on the construction of the Taj and the male members of these families are still passing down the traditions and knowledge of this exquisite marble inlay work.

When we went inside, there were some workers busy their latest masterpieces. Using a human-powered grindstone, the artisans delicately give shape to thin sheets of precious or semiprecious stones. Once a perfect fit has been achieved, the marble plate, into which the ornamental pattern will be integrated, is covered with a layer of henna paint in order for artisans to see the shapes drawn on the white marble. The single pieces that make the inlay pattern are laid out on the marble plate and their outlines are scratched into the surface. Once the carving is done, the artisans glue the stones into the carvings. However, they are not using regular glue. For more than 300 years, the artisans use a signature handmade glue, for which the formula is kept a trade secret. After the glue is dried, a grindstone shard is used to smooth out the surface after the inlays have been inserted. After all the detailed work is finished, the henna is washed off and you have a beautiful white marble surface inlaid with precious stones just like the ones you see at the Taj Mahal.

The marble the artisans use, and the type used to build the Taj Mahal, is a special, semitransparent marble called Makrana marble. This type of marble is only mined in India's Rajasthan region and the miners continue to bring this special marble out for use. Inside the artisans' shop, you can find various artifacts for your home and for your personal use. The owners were also kind enough to say that they handle the shipping to anywhere around the world as some of the works such as coffee tables and chessboards are quite heavy. While I was leaving Agra, I was left mesmerized. The magical atmosphere of the Taj Mahal and the adrenaline coming from being able to see this wonder of the world with my own eyes were too good to be real. Yet, I feel I must warn you: choose a cooler season to visit Agra and the Taj Mahal or you might find the heat and humidity will get the best of you!