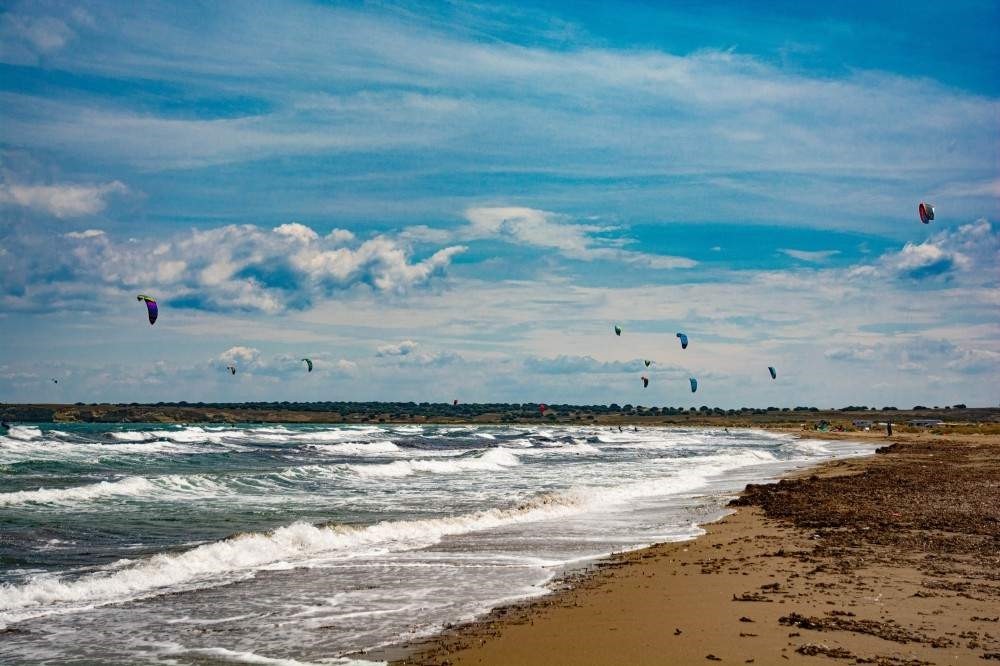 With its nature, history and unique way of life combined with a rebellious wind that keeps surfers coming back for more, Gökçeada is an exceptional member of the Cittaslow network


Once named Imbros, Gökçeada is Turkey’s biggest and debatably most beautiful island. The island has retained its history, culture, nature and a traditional way of life, which led it to be the first island to be accepted in the Cittaslow network. Located in the Aegean Sea where the Gulf of Saros and the Dardanelles Strait meet in Çanakkale province, Gökçeada has a population of 8,672, according to the 2007 census, which includes 1,871 people living in the villages on the island. But despite being heavily populated, Gökçeada has managed to preserve its untouched nature.
Because it is an important location at the entrance of the Dardanelles, the island has always been busy. Gökçeada has been inhabited as far back as history has been written. It was originally colonized by the Pelagians then the Persians, Athenians, Spartans, Romans, Byzantines, Genoese, Venetians, Ottomans and finally the Turkish Republic. The island was once mostly occupied by Ottoman Greeks but after the population exchange with Greece following Turkey’s War of Independence, the Greek villages were repopulated by Turks.
Tourism is one of the major incomes for the locals, but they are also heavily engaged in agriculture. Almost all of the agricultural activities on the island are carried out by organic farming, and Gökçeada is a major center of Turkey for organic agriculture. There are markets open certain days of the week where you can find everything from fresh fruit to the most delicious vegetables. Locals mix the island’s former Greek cuisine with Turkish and Mediterranean cuisines, making a fine mixture for your palate.
Being so close to Istanbul, Gökçeada is also a major getaway destination. With its untouched architectural features, which are mainly former Greek villages, and nature that mesmerizes its visitors, the island is like an oasis for urban dwellers. If you happened to visit the island in summer, you can sunbathe on Kefalos and Aydıncık beaches, located on the southern part of the island, or enjoy a mud bath in the salt lake adjacent to the beaches.
Turkish islands in the Aegean are blessed with serenity. Gökçeada is no exception; however, its serenity is also touched by a unique wind that transforms the island into a surfers’ heaven.
What makes Gökçeada a heaven for surfers is that you can surf here nine months a year. The surfing schools generally open in the beginning of April and close at the end of October. Thanks to the island's location, you can surf almost 24/7 and as a large bay, around 800 people can surf at the same time in Aydıncık.
Yet being a “slow city” has its perks. After being admitted into the network, Gökçeada’s way of life, its cuisine and history are now at the forefront, highlighting them as cultural treasures that should be protected. We recommend you spend a few days on the island if you make it one of your future holiday destinations. Just stay for a couple of nights, chat with the locals and try to soak up the sun as well as the island’s rich history.
With the impact of globalization, especially in urban areas, the increase in zoning regulations that allow construction in urban areas for structures like shopping centers and mass housing exemplifies the development of a lifestyle based on consumption, not production. The fast-moving, ever-consuming trend of the urban lifestyle has led to the loss of urban texture, history and nature, which we yearn for so much. Cittaslow International is an organization based in Italy that has created a network of cities where daily life is good and easy. With cities being included in this network, the unique, easy and serene lifestyles of these places are protected and even promoted for people who have almost forgotten how to live naturally.
Last Update: Dec 20, 2019 1:22 am
RELATED TOPICS