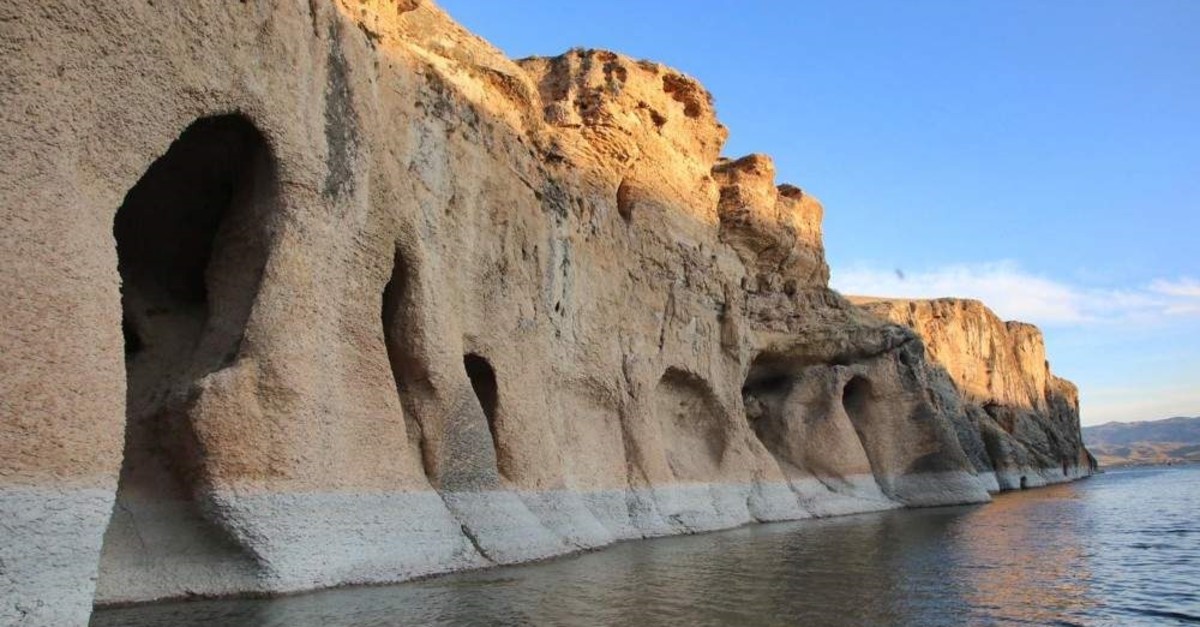 Karaleylek and Saklu0131kapu0131 canyons are located right next to Keban and Karakaya dam lakes where tourists can take boat rides. (AA Photo)
by Daily Sabah Nov 04, 2019 3:39 pm
If you are up to for some action in nature before heavy snow covers most of the eastern Anatolian landscape, you are invited to discover Karaleylek and Saklıkapı canyons.
The Karaleylek Canyon stretches 40 kilometers starting from the Keban Dam Lake while the 4.5-kilometer-long Saklıkapı Canyon is famous for its caves. These historical settlements and rock formations allow climbers to enjoy incredible scenery and offer adventure to visitors. The canyons are also famous for their bird population which allows bird observers to document Anatolia’s best-known bird species.
Visitors enjoy a boat ride on the dam lakes of Keban and Karakaya to reach the canyons. After the incredible boat ride, adventure seekers usually put their trekking boots on to discover nature’s gifts to humankind. Climbers also have an opportunity to test their skills at the canyons.
Located in Akuşağı village of Elazığ, Saklıkapı Canyon is actually a newly discovered canyon. It was discovered by a local who was collecting mushrooms in the region. The local shared the photos he took on social media and send the visual documents to academicians at Fırat University, who determined that the rock formation indicates a long canyon. The scientists said that it is a newly formed canyon compared to the other canyons in the region yet it is one of the most interesting formations in Turkey thanks to its naturally-formed trekking routes.
Karaleylek Canyon is also a newly discovered natural formation. It caught the attention of locals as black storks were found in that region. When they set out to observe they realized that black storks were actually living in the canyon.
The Governorate of Elazığ has recently initiated touristic tours to the canyons and dam lakes to promote these formations as well as make it easy for tourists to reach the region.
Last Update: Dec 20, 2019 1:26 am
RELATED TOPICS