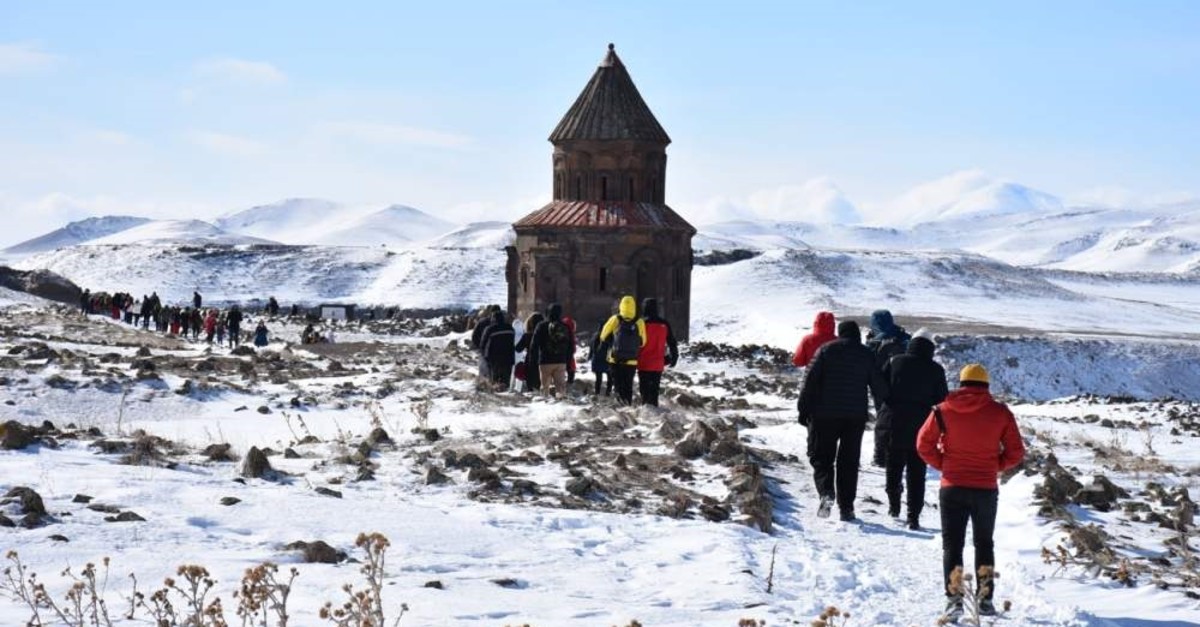 Known as the city of 40 doors and 1,001 churches, the Ani archaeological site in Kars on Turkey's eastern border never fails to amaze its visitors.

This time of year, the ruins of the medieval city are covered under a powdery blanket of snow, creating magical sights.

The head of a European Union delegation to Turkey, Christian Berger, and the EU ambassadors to Ankara from Lithuania, Bulgaria, Denmark, Latvia, Romania, Portugal, Belgium, Malta, the Netherlands, Croatia, Finland, Ireland and Greece visited the ancient site as part of a trip on the nostalgic Eastern Express train ride.

Despite the eyelash-freezing weather, the ambassadors and their spouses toured the ancient city near the Arpaçay district of Kars, admiring the 11th- and 12th-century Islamic architecture that have managed to survive until today.

Speaking to the Anadolu Agency (AA), Berger said he was very happy to have visited the site.

"It was a great pleasure to witness ancient history (with my own eyes) under the bright sun and blue skies. The city may have got lost in history, but now it has become a very important touristic attraction."

Reiterating that the ruins were one of the many places that showed Turkey is not just coasts and beaches, Berger said: "We have seen that you can not only ski here in the winter but also visit many touristic places."

Berger's wife, Marliena Georgiadou-Berger, showed off her knowledge of the Turkish language while describing her experience, saying she was "fascinated by Ani."

The ruins of Ani are one of the most beautiful and charming places I have ever visited. Especially during this time of year when it is covered under a blanket of snow, it was something else, a different pleasure," she continued in English.

Meanwhile, Latvian ambassador Peteris Elferts said the site really piqued his interest because it showed how different cultures coexisted in Turkey. "This place is truly fabulous and amazing. I'll tell people back home to visit. I'll tell them to visit not just the city but also to see all the civilizations that shared this land. I'll show them that Turkey is so much more than just beautiful sandy beaches and coasts. The natural beauties and cultural values of Turkey should be seen. I recommend it to everyone " he said.

Regarded as a cradle of civilizations that has seen the rise and fall of 23 dynasties throughout the centuries, the site has been growing in popularity with local as well as foreign tourists, especially after it was added to UNESCO's World Heritage List in 2016.

Ani's history dates back to 5000 B.C. to the Chalcolithic period. The city was an important passage point throughout history. It was also the first entrance gate to Anatolia from the Caucasus and was once used as a capital by Armenian rulers in the Bagratuni dynasty between 961 and 1045 B.C.

As one of the main attractions in the town, the Grand Ani Cathedral stands out as a large rust-colored structure, containing sculpted columns, arches and gates. Built by prominent Armenian architect Trdat in the 11th century, the medieval monument is considered to be the largest standing building in Ani. It is also where the first Friday prayers and prayers of conquest were performed in Anatolia after Seljuk Sultan Alparslan conquered the area in 1064.